Flashback: No. 1 pick Bob Hyland was elated to join Packers

Bob Hyland had no clue he was going to be selected in the first round by the Packers in the 1967 NFL Draft.

Flashback: No. 1 pick Bob Hyland was elated to join Packers 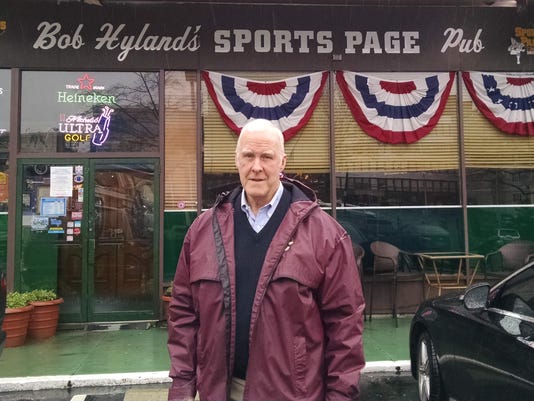 Bob Hyland is closing his “Sports Page” in White Plains, N.Y., after 44 years in the bar-restaurant business.(Photo: Submitted photo)

Bob Hyland had no clue he was going to be selected in the first round by the reigning NFL champion Green Bay Packers in the 1967 NFL Draft.

Before the draft, the All-American center/guard from Boston College was courted mainly by the Dallas Cowboys, San Francisco 49ers, and Chicago Bears.

“Those were the main teams interested in me, and the Cowboys and 49ers were sending me their hometown newspapers,” Hyland said. “It was a recruiting tactic back then. Hometown newspapers were the big thing and (team coverage) created interest in the team.”

In this case, it was an effective method. Hyland grew up in White Plains, about 20 miles north of New York City, and he enjoyed reading the sports pages.

“My dad would bring home four to five newspapers every day from New York and I used to read them all: The Post, the Daily News, the Journal-American, the Herald-Tribune,” Hyland said. “Plus the local paper in White Plains. I grew up in Giants territory for both football and baseball and I was a big fan and read everything I could on all sports. Later in life I called my sports bars Bob Hyland’s Sports Page.”

Hyland was more than a bit surprised about his draft status when he returned to his dormitory after his 9 a.m. class on March 24, 1967.

“I had just got back from class and had three roommates and everyone was excited,” Hyland said. “Coach Lombardi was on the phone and he told me, ‘You’re now a Green Bay Packer.’

“It came out of left field. I was thrilled for two reasons: because the Packers were the defending champions and because of Coach Lombardi. I was excited to play for him because he was a Fordham guy and had a lot of success with the Giants and in Green Bay.”

While elated to be part of the Packers organization, Hyland had another immediate commitment.

Lombardi, with total command of the franchise as both head coach and general manager, moved up to snare Hyland, trading Tony Jeter and Lloyd Voss to Pittsburgh for the ninth-overall pick.

When Hyland arrived in Green Bay, he was again surprised. But he quickly embraced Wisconsin traditions like Friday night fish frys.

“When you come from the New York City area, you can hardly believe that such a small town could support such a successful NFL football team,” Hyland said with a chuckle. “At first, I was taken back by such a small town-atmosphere. But I have to admit I liked it. Green Bay was similar to where I grew up.

“It had everything I needed: a football team, good restaurants, and friendly people. I learned about fish frys, Bob Long’s Pizza Hut, Fuzzy Thurston’s Left Guard, and Bob’s Big Boy.”

Hyland also learned about Lombardi the negotiator when it came time to signing his contract.

“With the (impending) merger of the NFL an AFL, the salaries and bonuses were reduced —and Lombardi did not like agents,” he said with a laugh. “We met in Chicago and he was a tough negotiator and had the leverage. He called me the Boston Muscle Head because I lifted weights — and Coach Lombardi never forgot that I brought in an agent.”

Hyland believed in weightlifting before it was popular among NFL players. 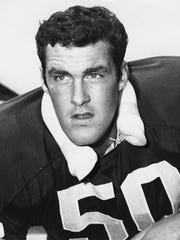 Bob Hyland was the Packers’ first-round pick in the 1967 NFL Draft. (Photo: Packer Plus files)

“It was a different era,” the 6-foot-5 offensive lineman said. “Only a few of us lifted after practice (linebacker Jim Flanigan and guard Gale Gillingham). “If you had a little fat hanging over your belt coach Lombardi thought you were out of shape. I carried the weight well, but he’d see me lifting weights after practice and was concerned about me, the Boston Muscle Head. He didn’t realize this was the new trend.

“To me, it was like the arms race. I had to keep up with it because the guy across from me was lifting and players were getting stronger all the time. I was listed at 255 pounds, but I was about 267. We had tough practices at Boston College, but training camp under Lombardi was grueling. We were never going to lose a football game because we were out of shape.”

“It was something, coming in and playing with the first Super Bowl champions: Bart Starr, Jerry Kramer, Forrest Gregg, Ray Nitschke, Willie Davis, all these future hall of famers,” Hyland said. “We had so many great leaders on that team. Bart was such a stabilizing force, a quiet leader. We had a lot of talent and it was gut-check time for me. The guys told me, ‘We win championships here, and you’re going to help us to that.’ I definitely felt the pressure as a first-rounder.”

Hyland was drafted to be Green Bay’s center of the future and was one of the larger linemen of his era. Ken Bowman was the incumbent at the position, but the promising rookie took over as the starter at midseason. “Bob was bright, aware, physical and had the whole package,” Kramer said.

“We had a pretty tight-knit group in the offensive line,” Hyland said. “Kenny Bowman wasn’t happy, but he was supportive. Bob Skoronski was our captain and Jerry Kramer was a vocal leader. I was surrounded by great talent.”

For Hyland, there was one challenge: his position coach, Ray Wietecha.

“Ray and I never got along,” Hyland said. “From Day 1. And he never felt comfortable starting rookies.”

Hyland started the last six games of the regular season and played extensively in the Western Conference Championship contest, a 28-7 rout of the Los Angeles Rams in Milwaukee, and in the famed Ice Bowl at Lambeau Field the following week.

“Wietecha convinced Lombardi to start Bowman in the Ice Bowl and the Super Bowl,” Hyland said. “He wanted a vet in there. So I have mixed emotions. I was glad we won, but I wish I could have started those games.”

Every Packer who played in the Ice Bowl has the brutal conditions etched in their memories, but Hyland had a unique story to share.

“Remember, they didn’t have the advanced weather warnings and radar of today,” he said. “I was at the stadium when the Cowboys bus came in for practice on Saturday. I was a 22-year-old, still in awe of NFL players like Bob Lilly, so I snuck into Lambeau to watch the Cowboys practice. It was 28 degrees or so and decent. The next day, well, was something else.

“When I heard the temperature Sunday morning in my little apartment, I called the stadium and they said, ‘Come out, we’re playing.’ I couldn’t believe it. I was used to the cold in New York, but nothing like the weather patterns that came together that day for the Ice Bowl.”

Hyland was practicing with the first-team unit all week leading up to Super Bowl II against the Oakland Raiders in Miami.

After a bobbled exchange near the end of practice on Friday/Saturday, Lombardi inserted Bowman with the starters. “Wietecha was in Lombardi’s ear I’m sure,” he said. Hyland was the long snapper in Super Bowl II, which was Lombardi’s final game as head coach in Green Bay.

Under Phil Bengtson, Hyland could not unseat Bowman at center or rookie Bill Lueck at guard. He was traded after the 1969 season and spent 1970 with the Bears before returning home to play for the Giants from 1971-’75 as a guard. Ironically, the Giants hired Wietecha in 1972 and Hyland was again relegated to a backup role for two seasons before earning a starting job in 1974-’75.

In 1976, he returned to Green Bay for one season under Starr.

“I went back to the Packers and enjoyed the 1976 season playing for Bart, even though we were not very successful (5-9),” he said.

Hyland finished his career with one final season in New England.

Hyland will also be remembered by Green Bay fans for one play against the Packers when he was a Giant. In the 1971 season-opener in Green Bay — a wild 42-40 New York victory— Hyland assisted on a tackle after a Doug Hart interception and ended up sliding on the sloppy field into the Packers’ sideline. He broke the leg of Dan Devine in his head coaching debut in Green Bay.

“I felt awful, in his first game,” Hyland said. “I just made the tackle and went on my way. After the game, reporters were asking me about Devine and I felt terrible.

“When I got back to New York, I got a telegram from Devine saying it wasn’t my fault. He said that refs have been telling him for years to stand back. Devine came to White Plains a few years later to speak and he asked, ‘Where’s Hyland? He broke my leg.’ He had a sense of humor about it.”

After his NFL career, Hyland returned to his roots. He and his wife, Liz, (married 41 years) have four children and settled in White Plains. His 44-year run in the bar-restaurant business comes to an end Friday. The Sports Page will close the doors for good after a banner week with the NCAA basketball tournaments and farewell celebrations with family, friends, customers, and former employees.

“I never expected to be in this business for the long term,” said the 71-year-old Hyland, a civic leader who once ran for mayor and also works as an insurance agent.

“But it’s been a lot of fun with a lot of great people and memories. Coach Lombardi was one of the most ethical men in the world and taught us about the value of hard work and dedication, which applies to football and life.

“He influenced the game and his players and many have gone on to success after football.”