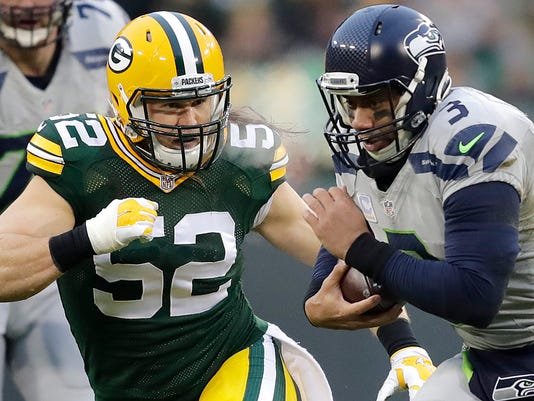 GREEN BAY – If the Green Bay Packers felt the schedule they faced last season featured too many gut bombs, then by comparison 2017 should be easily digestible.

The NFL released the full regular-season schedule Thursday and the Packers should have little to complain about.

» They open at home (against the Seattle Seahawks) for the first time since 2012.

» Their bye week comes right in the middle of the season.

» They play only one Thursday night game and it’s at home against Chicago.

» Eight of their games are at their preferred start time of noon (subject to flexible scheduling).

Unlike a year ago when they played their final two exhibition games and first two regular-season games on the road, the Packers will be at Lambeau Field four out of five weeks spanning the final exhibition game through Week 4 of the regular season.

DOUGHERTY: Will Rodgers be ready for early tests?

And they will open with some familiar faces.

The Seahawks will be making their third trip in three years to Lambeau Field and are likely to have former Packers running back Eddie Lacy in their backfield. Lacy, an unrestricted free agent, chose the Seahawks over the Packers in part because he wanted to be in an offense that runs the ball more.

It should be a good test for an embattled defensive unit.

The Packers played the Seahawks three times in Seattle between 2012-14 and lost all three, but now have an opportunity to return the favor, having beaten their NFC rival at Lambeau Field in 2015 and ’16.

After slugging it out with Seattle, the Packers will play their only road game in the month of September against the defending NFC champion Atlanta Falcons, who crushed the Packers 44-21 on Jan. 22 at the Georgia Dome for the right to advance to Super Bowl LI.

The NFC championship rematch, scheduled for Sunday night, Sept. 17, will be the regular-season debut of Mercedes-Benz Stadium, the Falcons’ new glass-paneled, retractable-roofed $1.5 billion home. It will be a familiar atmosphere for the Packers, who were the opposition when the Minnesota Vikings christened U.S. Bank Stadium in Week 2 last year.

The new stadium’s completion was slated for March 1, but now won’t open until Aug. 26, when the Falcons play their first home exhibition game. They will play there one more time, open the regular season on the road against the Chicago Bears and then return home to face the Packers.

This is the second consecutive year Green Bay will travel to Atlanta in the regular season and the third straight game that will be played there between the two teams, including playoffs.

After facing two NFC playoff teams from 2016, the Packers will host the Cincinnati Bengals in Week 3 and the Bears in Week 4 before returning to Dallas in Week 5 for a rematch of their 34-31 divisional-round playoff victory over the Cowboys at AT&T Stadium.

Dallas is one of five 2016 playoff teams the Packers will face this season. The others are Seattle, Atlanta, Detroit and Pittsburgh.

The networks are apparently looking forward to the Packers’ season. They are scheduled to play in five prime-time games.

Since 2007, the Packers have played on Thanksgiving Day every odd year on the calendar, but despite being scheduled to play on the road against annual hosts Detroit and Dallas, the Packers were skipped over this year. Both games would have been rematches of end-of-season battles that helped decide the NFC last year.

Maybe the thing that will please coach Mike McCarthy the most about the schedule will be the Week 8 bye. Last year, the Packers had their bye in Week 4, which was much earlier than they wanted, although it didn’t stop them from winning their final six regular-season games and two playoff games.

McCarthy’s team had enough injuries to benefit from the bye in Week 4 last year, but without a bye later in the year it forced him to cut back on practice time in order to keep the team fresh down the stretch.

The Packers will need to be fresh late in the year because they play five of their last eight games on the road, including another potential NFC North-deciding game against the Detroit Lions in Week 17. The Packers went on the road in Week 17 last year and beat the Lions, 31-24, to clinch the NFC North.

The home-field advantage the Packers enjoy in December won’t be in effect because three of their last four games are on the road.

The middle of the season features a four-game stretch in which the Packers will play three NFC North games, starting with a road game against Minnesota Oct. 15. After a home game against New Orleans Oct. 22 and the bye, the Packers will host the Lions on Monday night. The following week they travel to Chicago for a noon game.

Here is the Green Bay Packers' 2017 regular-season and preseason schedule (all times Central).