The charming Wisconsin narrative for outside linebacker Vince Biegel hit a speed bump Friday during the very first practice of rookie orientation. 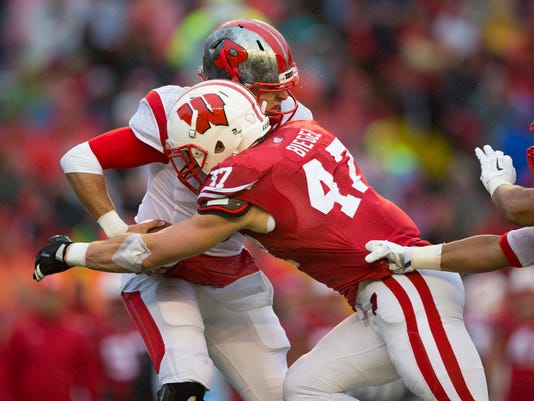 Biegel, a fourth-round pick by the Green Bay Packers, left the field with a hand injury and did not return.

“I was just jamming the tight end at the line of scrimmage, and all it was was I just kind of hyperextended it,” Biegel said after practice. “It’s not of too much concern, it’s not a season-ending injury by any means. This is a finger here. My whole body is ready to go. This is football. You get nicks and bruises. I’m not concerned about this at all moving forward.”

Biegel told reporters he underwent X-rays on his left hand and will be evaluated again before Saturday’s practice. Coach Mike McCarthy echoed Biegel’s comments and described the injury as “minor in nature.”

“So disappointed, obviously, that I didn’t get to finish my first practice as a Green Bay Packer,” Biegel said. “Obviously, I was really looking forward to this moment. But this is going to be a bumpy road. There’s ups and downs in this journey.”

Biegel was the first player to arrive at Lambeau Field on Friday after driving from his home in Wisconsin Rapids. He entered the locker room to find his stall sandwiched between fellow outside linebackers Clay Matthews and Nick Perry, the two premier edge rushers for the Packers.

“I was sitting in my locker the first day I came in and Clay approached me. It was fun to shake hands with Clay, see him, talk with him. It was really cool. A guy I’ve looked up to, I’ve taken parts of his game and tried to include them into mine, and I think it’s also a statement, saying ‘Vince, we’re going to put you right between Clay Matthews and Nick Perry.’ I think there’s some high expectations here.”

The buzz surrounding Biegel is not unlike the relative frenzy that followed wideout Jared Abbrederis during his stint with the Packers. Abbrederis, a fifth-round pick in 2014, had minimal contributions in three injury-riddled seasons but was adored and defended by fans throughout the state.

Similar expectations are likely to surround Biegel, who was drafted a round earlier than Abbrederis and has a much clearer path toward legitimate playing time.

“I think (Biegel) is going to be fine,” McCarthy said. “He drove here, he was the first one here, he sat in the front row. He’s off to a great start.”