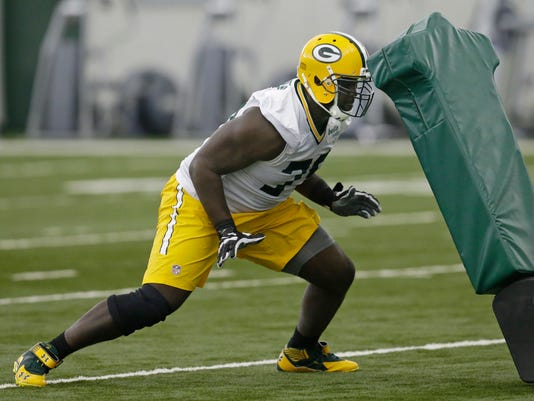 GREEN BAY - When T.J. Lang accepted a three-year, $28.5 million contract from the Detroit Lions in mid-March, metaphorically thumbing his nose at a modest offer from the Green Bay Packers, the veteran guard left his old club with a gaping hole along the offensive line.

Since then, the Packers and general manager Ted Thompson have cast a wide net in search of Lang’s replacement. The candidates include Jahri Evans, a six-time Pro Bowler signed on the cheap in free agency; former sixth-round pick Kyle Murphy, who is moving from tackle to guard; second-year player Lucas Patrick, a member of last season’s practice squad; and veteran Don Barclay, who is also the backup center.

The four-man race expanded to five during the NFL draft when Thompson used a sixth-round pick on Kofi Amichia (pronounced Uh-mee-chee) of South Florida. And as it turns out, Amichia had known about the Packers’ vacancy for quite some time.

“That was something they discussed with me before they even took me in the draft,” Amichia said. “Ever since they started talking to me in February they said that’s the open spot, so if I come in I’m going to have to compete for that or be a backup at any of the other spots.”

Amichia and his fellow draft picks took the field this weekend as part of the rookie orientation program at Lambeau Field, and each season a handful of former practice squad players are involved as well. This year’s group included Patrick, who spent the whole of 2016 on the practice squad before signing a reserve/future contract in January.

For both players, the rookie weekend marked the beginning of what they hope is a lengthy competition to earn the starting spot at right guard.

“You’re looking for flexibility,” coach Mike McCarthy said of the young offensive linemen. “If you’re not a starter on any part of our football team, particularly on the offensive line, your value is definitely going to increase with the ability to play more than one position.”

Such a statement can be applied liberally to Amichia, who played three positions during his time at South Florida. He began his career at center before kicking out to right tackle and, eventually, left tackle, where he started 26 games over the last two years. He also practiced sporadically at guard early in his career.

The Packers’ coaching staff toyed with Amichia’s versatility almost immediately. The 6-3 1/2, 308-pound lineman took reps at center, guard and left tackle during his first practice Friday, shaking off some rust in the process.

“It’s definitely a lot quicker (at guard) than being out there on the outside (at tackle),” Amichia said. “I like being on the outside because you’re on an island. It’s not that much difference because offensive line is offensive line, you’ve just got to be able to hold your man up and protect the quarterback. So I feel like I’ll be fine where I line up.

“I felt like (my first day) was pretty good. At first, I was a little slow because I haven’t been at guard since like freshman year of college. I feel like the second play I was pretty good. I was ready to go.”

In reality, all of the candidates at right guard are chasing Evans, the former New Orleans Saint, whose arrival in Green Bay shook the depth chart from the minute he stepped off the plane. Evans, 33, signed a team-friendly contract with the Packers that included only $200,000 in guaranteed money distributed in the form of a signing bonus.

Despite Evans’ age, director of football operations Eliot Wolf said the personnel department was more than satisfied with what he put on tape in 16 games with the Saints last season, especially coming from a “pass-happy offense” not unlike what the Packers employ with quarterback Aaron Rodgers.

“The Jahri Evans addition is excellent,” McCarthy said, “and you talk about leadership and success. Having an opportunity to visit with him on his visit here, where he is in his career, what he was looking for — to be part of a championship program — that’s exactly what we’re looking for.”

Patrick echoed the comments from McCarthy.

“Super good dude,” Patrick said Friday. “Great older guy already. Came in, he’s got a lot of experience with the Saints. It’s good to have him come here. Being a young guy still, I can ask him questions. Adds a little competition to the spot.”

It’s a competition that is likely to play out over the course of months rather than weeks, stretching from the offseason program to OTAs and minicamp to the exhibition games in late August and early September.

And with his roster reinforced, McCarthy has plenty of options to choose from.

“It’s an opportunity,” Patrick said. “I think we’ve got the right guy in the building, of course. I’m going to give it everything I got and hope it’s me. If it’s not, I’m going to push the guy in front of me as hard as I can to where they feel it’s me.”