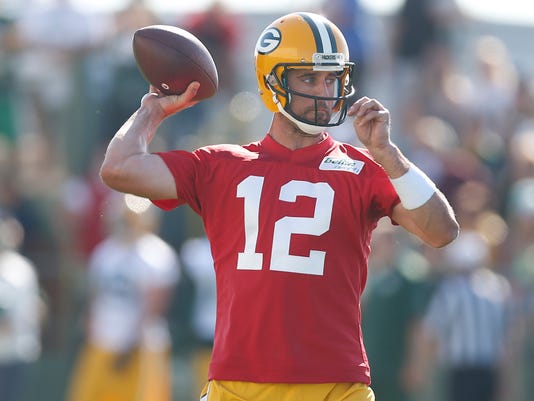 Aaron Rodgers and other veterans have been excused from the Packers' three-day minicamp this week.(Photo: Calvin Mattheis, Milwaukee Journal Sentinel)

GREEN BAY - For the second straight year, quarterback Aaron Rodgers and other Green Bay Packers veterans with five or more years of NFL experience have been excused from participating in the team's three-day minicamp that begins Tuesday at Clarke Hinkle Field.

“We had a practice with all the players under six years,” McCarthy said. “To me, Friday and these three practices in front of us are the most important practices of the offseason because the reps go up for everybody. You look for those first-, second-, third-, fourth-, fifth-year ... you look for a guy to step up and kind of take a little bit of a leadership role on the practice field. It's worked out. I think this is the second or third year we’ve done this, and I feel like we’ve gotten a lot of out of it. I’m really looking forward to these three practices.”

Besides Rodgers, the other 15 veterans who have the required experience to skip the otherwise mandatory minicamp include receivers Jordy Nelson and Randall Cobb, tight ends Martellus Bennett and Lance Kendricks, defensive lineman Mike Daniels and linebackers Clay Matthews and Nick Perry.

Note: Standing room only along South Oneida Street. Sessions will be moved inside the Don Hutson Center and closed to the public in the event of inclement weather.