A capsule look at the Packers' exhibition game at Washington.

Who knows what clicked inside of CB Josh Hawkins on Saturday night, but after 10 days of pretty inconsistent play, the second-year pro had a big night playing in a starting role. Hawkins got the nod with Davon House and Damarious Randall sidelined and he rose to the occasion. In just the first half, Hawkins had a team-high five tackles and three pass break-ups, two of them on fades into the end zone. The coaches wanted to take a good look at the speedy Hawkins this week and after a really lousy practice on Wednesday, he got his act together. After Trevor Davis’ fumble set up Washington deep in Packers territory, QB Kirk Cousins got TE Vernon Davis matched with Hawkins in the corner of the end zone. At the last second, Hawkins stuck his left hand out and knocked down the pass. Later, Hawkins drilled Davis on a pass across the middle, knocking the ball loose before Davis could make a move upfield. Finally, on Washington’s final drive of the half, Hawkins again got tested in the corner of the end zone, this time on a throw to receiver Ryan Grant. Hawkins reached up with his 32 ¼-inch length arm and tipped the ball away. The performance puts Hawkins in a much stronger position heading into the third game as he battles for a spot on the 53-man roster.

The Packers would like to be a lot further along with their backup offensive line than they are. But the truth is, they’ve got the potential for big problems if the backups keep playing like this. The interior position didn’t look any more promising with Lucas Patrick, Justin McCray and Kofi Amichia all looking overmatched at times. McCray and Amichia had holding penalties at the start of the third quarter when the Packers were trying to re-establish their offense. McCray’s penalty wiped out a 21-yard completion from Brett Hundley to TE Emanuel Byrd. Those three weren’t the only ones struggling. For the second straight game, left tackle Jason Spriggs gave up a bad sack. He was beaten around the corner by LB Chris Carter on third down, a play after McCray was called for holding. Spriggs, a second-round pick last year, is going to be in a critical position this year, probably playing top back at four different positions.

Green Bay Packers quarterback Brett Hundley (7) scrambles with the ball during the first half against the Washington Redskins at FedEx Field in Landover, Md., Saturday, Aug. 19, 2017. Alex Brandon, AP
Fullscreen

Running back Aaron Jones of the Packers scores a touchdown against Washington in the first half. Getty Images
Fullscreen

Quarterback Brett Hundley throws a touchdown pass against Washington in the first half. Getty Images
Fullscreen

Rob Kelley is tackled by Packers defenders during a preseason game at FedExField. Getty Images
Fullscreen

Packers cornerback Josh Hawkins leaps onto a group of players to help his teammates make a tackle. Getty Images
Fullscreen 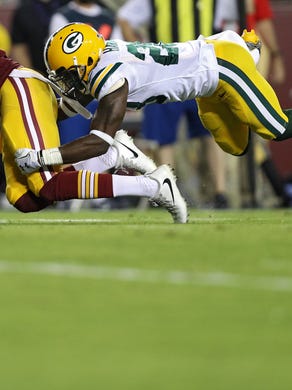 Rob Kelley of the Redskins is tackled by inside linebacker Jake Ryan. Getty Images
Fullscreen

Green Bay Packers running back Ty Montgomery (88) soaks up the sun in the 90+ heat before the game against the Washington Redskins Saturday, August 19, 2017 at Fedex Field in Landover, Maryland. Jim Matthews/USA TODAY NETWORK-Wis
Fullscreen

» Quarterback Aaron Rodgers indicated Saturday on Twitter after giving away four tickets to the game that he would be playing. Coach Mike McCarthy had not said this week whether Rodgers would play.

» Punt returner Trevor Davis has to catch the ball, but a big reason he muffed his first punt return was because rookie CB Kevin King missed his block on the gunner. As soon as Davis looked up, the defender was in his face and he looked like he tried to protect himself before securing the catch.

» McCarthy was on point with his instant replay challenges. He won both of them in the first half, one asserting Washington had 12 players on the field and the other that Vernon Davis had not held on long enough for a catch on the play in which Hawkins knocked the ball loose.

» Wide receiver Jeff Janis caught two passes for 46 yards, giving him three for 66 (22.0) in the preseason.

» Linebacker Joe Thomas got beat for a pair of receptions, including a 29-yarder on a wheel route to running back Chris Thompson in the second quarter.

» On the 3-yard touchdown pass from Rodgers to TE Martellus Bennett, Washington played its base defense because the Packers had two tight ends on the field. Bennett lined up as a receiver and was matched up on a linebacker.

Quote of the day

"I thought Aaron was excellent. I thought the whole drive, as far as guys fighting through the penalty, taking advantage of the 12 men on the field – a 16-play drive, that’s exactly what you’re looking for. A good run-pass mix. Very pleased with the start.” – McCarthy.

The Packers’ next practice is set for 12:15 p.m. Tuesday at Ray Nitschke Field.