A few important questions remain unanswered a little more than a week before the Green Bay Packers' season opener against the Seattle Seahawks.

Packersnews.com's Aaron Naglers breaks down the Packers victory over the Rams and takes questions from the fans. 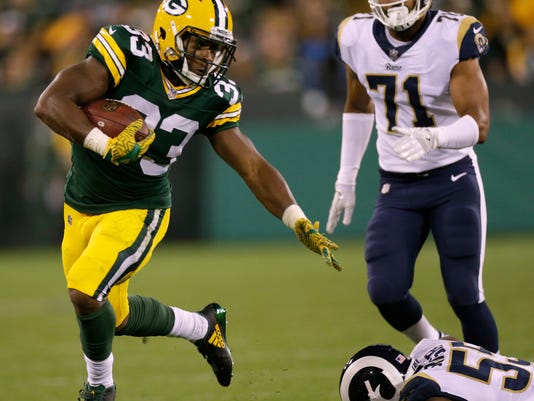 GREEN BAY – It’s never easy for NFL teams to settle on the 53 players they plan to carry into the first week of the regular season, but for the Green Bay Packers there’s no reason to believe they’ll be doing anything Saturday but deciding a half dozen spots.

In a battle of backups, the Packers’ 24-10 victory at Lambeau Field proved they are the better team, but it left a few important questions unanswered a little more than a week before the season opener against the Seattle Seahawks.

Who would you cut? RosterBuilder makes you the GM

Here are the most crucial:

The Packers believe in running back Ty Montgomery, but they’re going to need a reliable backup both as injury protection and as a complement.

The decision is between rookies Jamaal Williams and Aaron Jones. The Rams game was consistent with the course set during training camp: Jones is the better runner and Williams is the better blocker.

The 6-foot, 213-pound Williams probably can protect quarterback Aaron Rodgers better than any back on the roster. Williams made three impressive blocks for backup Brett Hundley, including one where he recognized a late blitz from outside linebacker Ejuan Price on the opposite side of where he was lined up and somehow knocked him off course.

Williams has been doing that all camp long, and so the Packers should have no qualms playing him on any down. However, Williams finished the exhibition season with 25 carries for 61 yards (2.4 average) with a long run of 6 yards.

He is not as advanced as Jones when it comes to running the football. In 19 exhibition carries, Jones rushed for 105 yards (5.5 average) with a long run of 28 yards. But it wasn’t the stats that were the most impressive thing.

It was the power with which Jones ran and the comfort he feels in the zone scheme.

On a 10-yard run in the second quarter, he dragged safety Cody Davis the final 5 yards. On a 24-yard draw play on third and 23, Jones broke three tackles and finished off the run by putting his shoulder into safety John Johnson and plowing forward for the first down. He would have had another long gain if he hadn’t slipped making a cut in the hole.

When Kofi Amichia couldn’t control nose tackle Tyrunn Walker when Williams was in the game, Williams could not run through the arm tackle. He just isn’t built as low to the ground as Jones and doesn’t possess the same strength right now.

Unresolved is how the Packers make this work.

At this point, the Packers are committed to Brett Hundley as their backup quarterback.

But there were a number of red flags that came up during an extraordinarily heavy workload (147 snaps), given there were four quarterbacks in camp.

Hundley just couldn’t make anything happen in the passing game when he left the pocket. He threw into coverage way too often. He missed some open receivers.

When allowed to throw the ball deep, he was impressive.

But he had 27 drives in four games and managed five touchdowns and a field goal. He took 11 sacks. He completed 63.2 percent his passes, but he threw the only interception, had a 3.9 touchdown percentage and a modest 88.8 passer rating.

By no means should he give the Packers the feeling they can win without Rodgers. You can talk about how bad his protection was, but then how did Taysom Hill do so well playing with the No. 3 line?

Which brings up the Hill dilemma.

The Packers probably are going to have to keep him after he led two more scoring drives -- giving him three touchdowns and a field goal in seven exhibition series  — against the Rams. Unlike Hundley, when Hill left the pocket, he looked to throw whenever possible.

His 25-yard touchdown throw to tight end Aaron Peck came after he pressed the line of scrimmage and drew defenders to him. Then he used his cannon arm to throw off his wrong foot to Peck near the goal-line.

If the Packers let Hill go and he’s picked up somewhere else, it’s Hundley or bust. Joe Callahan probably will move on whether it’s to someone else’s 53 or a practice squad.

Defensive coordinator Dom Capers has a problem on his hands, but it’s a good one to have.

How is he going to get rookie safety Josh Jones on the field?

Based on Jones’ performance against the Rams, he has to figure out a way. The Packers haven’t had anyone that big and fast since Nick Collins.

Most impressive was his play in coverage on special teams.

He made a tackle from his back on the opening kickoff. He ran free to the punt returner three times from a gunner position. On defense, he made some errors, missing a tackle that led to a touchdown and running into a teammate in coverage that led to a sizable gain.

But when Jones blitzed, either off the edge or up the middle, the force with which he ran through blockers was noticeable. NFL offenses are going to slow him down and make him miss, but his combination of size and speed can’t be left on the sideline for too long.

With the caveat that he didn’t face a starter all night, left tackle Jason Spriggs bounced back nicely after a rough three games. He was far more nimble with his feet and effective with his hands than he had been.

Spriggs is going to be the backup left tackle no matter what, but at least the Packers can cut down on antacids after that performance. Right tackle Kyle Murphy also handled his assignment fairly well. A couple of times he recovered just in time to push a rusher away from the quarterback on a wide rush.

Inside, the Packers have to be terrified going into the season. It’s hard to imagine Don Barclay being ready for the season opener so someone is going to have to be the backup center. Whether it’s Justin McCray, Lucas Patrick or someone from another team who gets cut Saturday remains to be seen. Corey Linsley had better stay healthy for Rodgers’ sake.