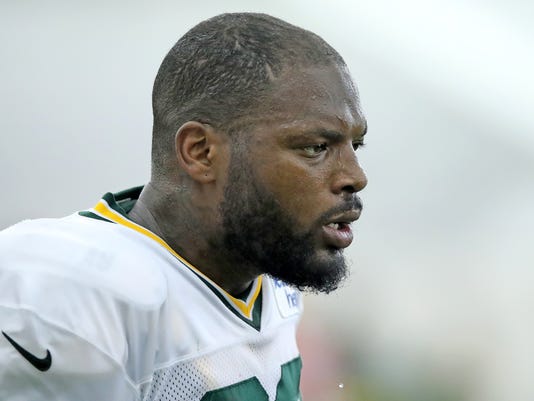 GREEN BAY - Martellus Bennett fought back the tears almost 20 minutes. He was standing at his locker, fielding question after question about the brother he’ll block Sunday afternoon, but the conversation rarely touched football.

The Green Bay Packers tight end was between meetings earlier Wednesday when he saw the video of his big brother, Michael Bennett, face down in handcuffs. Mistakenly identified as a gunman after last month’s Floyd Mayweather-Conor McGregor fight, Michael had one member of the Las Vegas Police Department straddling his back. Another stood over him on a ledge, aiming his gun.

It’s easy, Martellus said, to look past the rash of national anthem protests throughout the NFL this past year, a statement against inequality and police brutality Michael leads from the forefront. People focus on the action associated with protesting, Martellus explained. Not the reason. From the outside, Michael Bennett is the Seattle Seahawks’ Pro Bowl defensive end. Martellus Bennett? He saw his brother lying on pavement, asking a police officer what he’d done wrong, believing his skin color made him a target.

Martellus said he excused himself from a meeting after seeing that image. Then he broke down and cried. It wouldn’t be the only time. Near the end of that 20-minute conversation at his locker, he allowed his mind to consider what might have happened.

“You just think, ‘What if?’ You know?” Martellus said, voice cracking and tears running. “Two seconds this way, two seconds that way, the whole thing is different. So for me, I’ll just be happy to see my brother. Because there’s a chance I couldn’t see him.”

In another world, Martellus might have spent 20 minutes discussing the awkwardness that awaits Sunday. The Packers open their season against the Seahawks, pitting brother against brother. It will be the sixth time the Bennetts have played each other in the NFL.

For the entire family, this meeting will bring deeper meaning.

Martellus was returning from a preseason trip to Denver the night his brother was handcuffed. He didn’t hear from him until after arriving in Green Bay well past midnight. Martellus said his brother was “hysterical” on the phone. His first reaction was to calm and comfort.

In the next 11 days, Martellus gave his brother guidance. Long before Michael Bennett released a lengthy statement Wednesday on Twitter revealing his ordeal, he sought advice. Martellus, a writer himself, said he helped proofread the letter, though the words came from Michael.

“I’m very proud of Michael,” Martellus said, “and the way that he handled it. There’s a lot of guys who told him not to say anything. It may be a distraction. You don’t need to say anything. You’re alive, you lived through it, why tell anyone your story? For me, I think that’s the wrong way to go about it.

“I think his letter, it was eloquent. You had to empathize with the side of the story that he was telling, what happened to him.”

“What happened with Michael,” Carroll said in his own statement, “is a classic illustration of the reality of inequality demonstrated daily.”

“The issues Michael has been raising,” Goodell said, “deserve serious attention from all of our leaders in every community.”

Once the initial shock wore off, and Martellus knew his brother was safe, he said the anger set in. Even now, almost two weeks later, Martellus acknowledged he’s still angry.

“Just thinking about what could have happened, what could have been,” Martellus said, “it was just so close. You never know these days. I felt like God wanted it to happen for him, and for him to live through it, because he’s very strong in his beliefs about what’s going on in the community, and try to help all people – not just black people, but anybody that’s in the situations – that he feels like they’re oppressed. Anybody that’s dealing with oppression, he’s out there helping and doing what he can.

Martellus said he does not plan to sit through the national anthem Sunday, like his brother and so many others across the NFL have done in the past year. But he said he supports his brother’s crusade. Martellus hinted at possibly releasing a political cartoon, using his art to make a statement.

Michael likely will sit through the national anthem, as he did in the preseason. Then, the Bennett brothers will play each other for the sixth time. They never were competitive growing up, Martellus said, always supporting each other instead. Their battles are unfamiliar territory. In five previous matchups, Martellus guessed he has blocked his brother only nine times.

There’s a good chance he never felt so fortunate to hit his brother as he will Sunday.