A look at the tackles who have been inducted into the Green Bay Packers Hall of Fame.

Packers tackle Robert (Cal) Hubbard was inducted into the Hall of Fame in 1963.(Photo: Packers Hall of Fame)

Robert Calvin Hubbard (October 31, 1900 – October 17, 1977) was a professional American football player and later an umpire in Major League Baseball, and is a member of three major sports halls of fame. He is currently the only person to be enshrined at both the Pro Football Hall of Fame and the Baseball Hall of Fame.

Born in Keytesville, Missouri, Hubbard attended Centenary College in Louisiana, where he played football from 1922 to 1924 under noted coach Bo McMillin; he was inducted posthumously into the college's Athletic Hall of Fame in 1990. When McMillin moved on to suburban Pittsburgh school Geneva College in western Pennsylvania, Hubbard followed him and played there in 1926. Noted for having outstanding speed for a player of his size (6' 4", 250 lb or 1.93 m, 115 kg), he starred as a tackle and end, playing off the line in a style similar to that of a modern linebacker. He was inducted into the College Football Hall of Fame in 1962.

Hubbard moved on to the National Football League in 1927, signing with the New York Giants for a salary of $150 per game. Playing alongside Steve Owen, he helped the Giants win the league championship in his rookie season, and was named all-league the following year. But Hubbard, who carried a lifelong dislike for big cities, didn't feel comfortable in New York, and a 1928 road game in Green Bay led him to request a trade to the Packers, indicating he would retire otherwise. The Giants obliged him, and the small-town atmosphere with his new team suited him perfectly. He thrived in Green Bay under coach Curly Lambeau, with the team winning the NFL title in each of his first three years there (1929-1931). He continued to be named to all-NFL squads before retiring following the 1933 season.

In 1934, Hubbard served as the line coach at Texas A&M, but he was persuaded to return to the field after only one year of college ball, going back to Green Bay for the 1935 season. In 1936, the Giants needed his help on the field, and again persuaded him to forgo retirement; he finished his career that season with the Pittsburgh Pirates, the franchise that was to become the Steelers. He was among the initial class of inductees to the Pro Football Hall of Fame in 1963; in 1969, he was voted the greatest tackle of the NFL's first fifty years.

As Hubbard's football career wound down, he began to focus on a second career; he started umpiring in baseball's minor leagues in the summers before football seasons began, and by 1936 had reached the majors, where he worked in the American League from 1936 to 1951. Immediately recognized as one of the game's best officials, he was selected to work in the World Series in 1938 after only three years' experience; he would later officiate the Series in 1942, 1946 and 1949 as well. In addition, he umpired in the All-Star Game in 1939, 1944 and 1949, calling balls and strikes for half of the 1939 and 1944 games. As an umpire, Hubbard found that the accepted practice of umpires acting on instinct in moving about the field contributed to confusion regarding who should make which calls. Drawing on his football background, he carefully plotted out a system of positioning for umpires whereby each umpire had specific responsibilities for various types of plays; his ideas formed the foundation of the new methodology when the major leagues went from three-man umpiring crews to four-man crews in 1952, and they remain the basis for modern positioning in umpiring to this day.

An off-season hunting accident following the 1951 season damaged the vision in his right eye, and it was necessary for him to retire; but he was soon named the AL's supervisor of umpires, a position he held from 1954 to 1969. He was elected to the Baseball Hall of Fame in 1976 as only the fifth umpire to be honored.

Hubbard died of cancer at age 76 in St. Petersburg, Florida. He is buried in Milan, Missouri.

Cal Hubbard, was one of the largest, quickest and most agile linemen of his day. At 6’5” and 250-pounds, Hubbard was a devastating blocker and was often double teamed on defense where he relentlessly pursued ball carriers.

Hubbard, from Centenary and Geneva Colleges, made his reputation in pro football with the New York Giants in 1927. Their defense allowed just 20 points all season.

Hubbard came to the Packers in 1929. He quickly earned the admiration of teammates and the respect of players on other teams in his role as the so-called “policeman.” The even-tempered Hubbard made certain opponents didn’t get away with dirty hits.

In addition to his pro football career, Hubbard chose to work his way up the baseball ladder as an umpire. After toiling in the minor league for eight seasons, he became an American League umpire in 1935. For 17 seasons he was known as “the walking rule book.”

Hubbard is the only Packer who has been elected to both the Baseball and Pro Football Halls of Fame. He is also a member of the College Football Hall of Fame.

He was elected as a charter member of the Pro Football Hall of Fame in 1963. 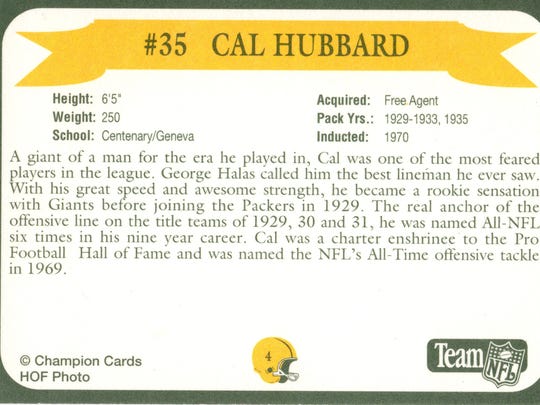