Rated the best athlete available in the 1968 draft, 6’5”, 235-pound Fred Carr, Vince Lombardi’s last first round draft choice, lived up to his ratings.

He recovered 15 fumbles and intercepted eight passes, returning one for a touchdown as a Packer. Carr was tried at tight end in 1968 and defensive end in 1969 before settling in at linebacker the remainder of his career. He defined a new era of taller, faster linebackers. Carr blocked three field goals and two extra points in 10 seasons as a Packer.

The athletic Carr was also a member of the University of Texas-El Paso Miners N.C.A.A. basketball champions in 1966. 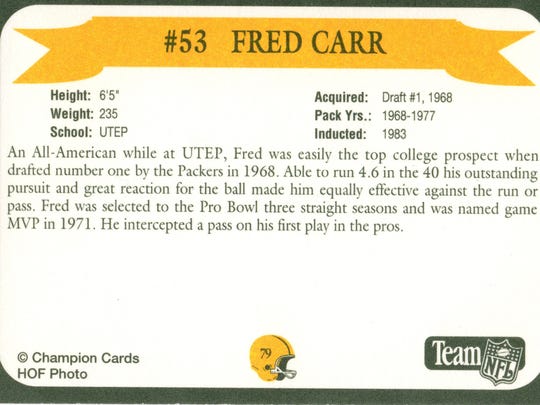