A look at the centers who have been inducted into the Green Bay Packers Hall of Fame.

Kenneth Brian Bowman (born December 15, 1942 in Milan, Illinois) was a center in the National Football League for the Green Bay Packers.

A Rose Bowl starter for the Wisconsin Badgers in 1963, 6’3”, 235-pound Ken Bowman worked his way into the starting center position on the Packer teams of the mid 1960s.

Bowman played on three straight championship teams, the first two Super Bowl winners and the 1972 Central Division champions. He was a Packer from 1964-’73.

He studied at the University of Wisconsin law school and became an attorney while playing for the Packers. An underrated linemen during his career, Bowman was voted offensive MVP by the Wisconsin Pro Football Writers in 1971.

Due to chronic shoulder separations, he often played with his left arm chained to his side. Bowman and guard Jerry Kramer opened the way for Bart Starr’s touchdown in the ‘67 NFL championship victory, the famed “Ice Bowl.” 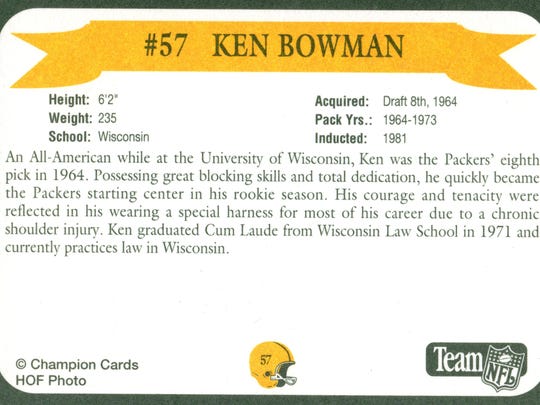