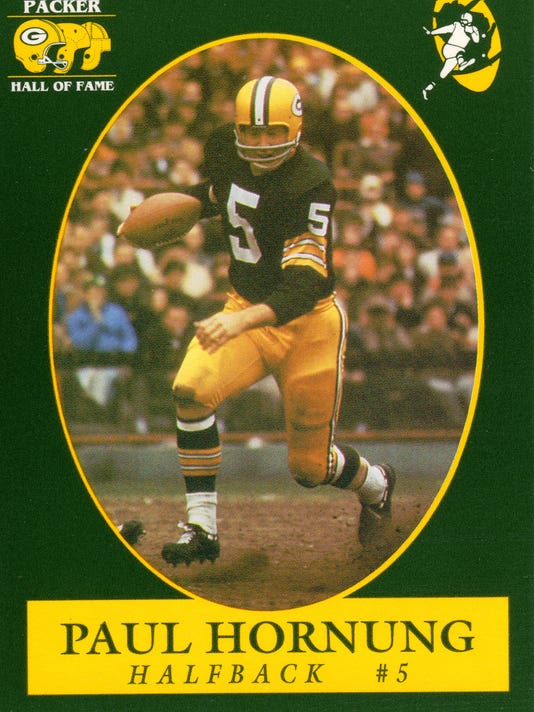 In the 1957 NFL draft, the Packers were awarded a bonus choice, an extra first round draft pick. Their choice was the Heisman Trophy-winning quarterback from Notre Dame, Paul Hornung.

In his first two seasons, Hornung struggled to live up to his press clippings. The “Golden Boy” seemed destined to be a tarnished Heisman Trophy winner.

Hornung’s career exploded in his third season when Coach Vince Lombardi arrived and made him the starting halfback. He led the Packers in rushing with 681 yards and in scoring with 94 points.

In 1960, Hornung set an NFL record, smashing Don Hutson’s then 18-year-old scoring record by 38 points, with 15 touchdowns, 15 field goals and 41 extra points for 176 points. He also rushed for 671 yards, caught 28 passes and threw for two touchdowns.

An All Pro selection in 1960 and ‘61, Hornung was injured in 1962 against the Vikings and missed five games. Then, early in 1963, NFL Commissioner Pete Rozelle suspended Hornung and Detroit Lion defensive tackle Alex Karras for that season for gambling.

He played three more seasons in Green Bay with limited, but, at times, memorable, success.

In 1964, Hornung’s free kick helped beat the Bears. In 1965, he scored five touchdowns in a key 42-27 victory against the Baltimore Colts. In 1966, he missed five games with a pinched nerve in his neck, an injury that eventually ended his career.

Tabbed by the expansion New Orleans Saints early in 1967, Hornung retired before ever playing in the Crescent City.

“He’s got to be, I would say, the greatest competitor I’ve ever coached,” said Lombardi. “The tougher the game, the tougher he played.”

Hornung was elected to the Pro Football Hall of Fame in 1986. 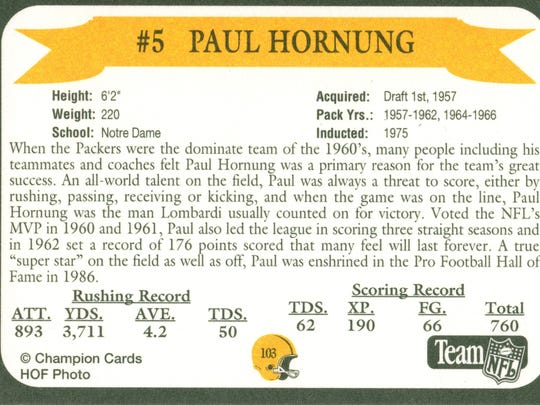