A look at the linebackers who have been inducted into the Green Bay Packers Hall of Fame.

At 6’3”, 240-pounds, Ray Nitschke was an outstanding fullback and linebacker at the University of Illinois – with a bit of a wild streak. Drafted by the Packers in 1958, Nitschke learned to channel his emotions to the confines of the football field where he became one of the greatest linebackers in NFL history.

“He’s the rowdy of this team and the whipping boy,” Coach Vince Lombardi wrote in Run to Daylight. “He can take it. He is a big, rough, belligerent, fun-loving guy with a heart as big as all outdoors. You don’t improve him...he improves himself.”

His menacing scowl and powerful forearm blows struck fear in the hearts of strong men throughout the NFL.

Nitschke played 15 seasons for the Packers, the second longest career in team history. He was most valuable player of the 1962 championship game victory over the New York Giants.

“You’ve got to like contact,” Nitschke once said. “If you’re not willing to hit people you don’t belong on the field.”

“I grew up belting the other kids in the neighborhood,” he recalled. “I felt I was somebody who didn’t have anything and I took it out on everybody.”

“Success has a high price,” said Nitschke. “Not many of us are willing to pay for it. Even fewer of us are fortunate enough to set a goal, steel ourselves to the task and carry it through. I’m prepared to win – whatever it takes.”

Nitschke intercepted 25 passes as a Packer, returning two for touchdowns. He also recovered 20 opponent fumbles, second only to Willie Davis in team history.

Nitschke was elected to the Pro Football Hall of Fame in 1978. 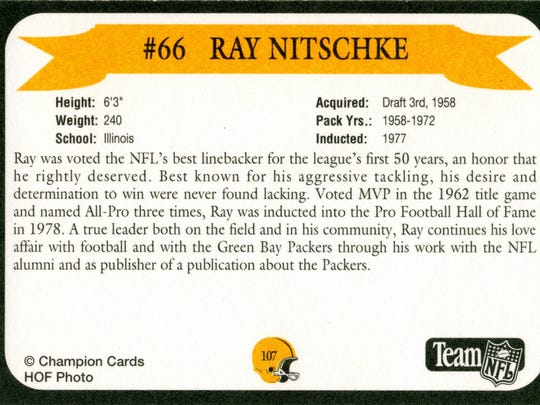