Bennett having fundamental issues with drops

Sunday’s loss to the Falcons still was an unsightly performance for Packers tight end Martellus Bennett.

Bennett having fundamental issues with drops

Aaron Nagler takes to Facebook Live to talk the day after the Packers' loss to the Falcons and answers your questions. 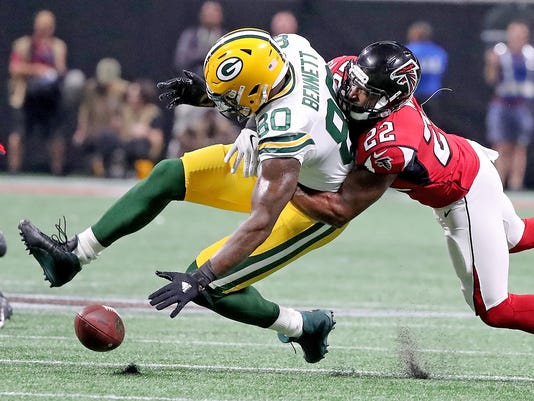 GREEN BAY - Take away the offensive pass interference penalty that nullified a 36-yard pass to wide receiver Randall Cobb, and Sunday’s loss to the Atlanta Falcons still was an unsightly performance for tight end Martellus Bennett.

On a night when quarterback Aaron Rodgers was often under siege, the big free-agent signing for the Green Bay Packers did him few favors. Bennett caught just five of the 11 passes thrown his way and had four drops, two of which were wiped away by penalties.

Bennett finished with 47 receiving yards, fourth-most for the Packers behind Davante Adams, Ty Montgomery and Cobb.

“I just go back to the fundamentals of it,” offensive coordinator Edgar Bennett said. “It’s as simple as that, to be honest with you.”

Bennett had two drops on the first drive alone. Rodgers targeted Bennett on a short curl to the left side of the formation, but the ball clanged off Bennett’s hands and hit the turf.

He dropped another pass two plays later — this time on a slant route — but safety Keanu Neal had a handful of Bennett’s jersey and was flagged for pass interference to wipe away the mistake.

Bennett dropped two more passes in the second quarter. First he failed to secure a low throw from Rodgers on the left side, and later he bobbled a short throw along the sideline.

Once again, Bennett was bailed out by a penalty on his fourth drop of the game. Cornerback Robert Alford was flagged for holding Adams on the opposite side of the field.

“It really just always goes back to being fundamentally sound, trusting his training,” Edgar Bennett said. “He has really good hands. We just have to be fundamentally sound in those situations, not allowing the ball to cross your eyes, things like that, extending for the football. He’s obviously a special player, but in that case it was more fundamentals than anything else.”

Adams and Jordy Nelson had nine drops each for the entire 2016 season. Cobb had the best catch percentage on the team and dropped only two passes all year.

Injury report: Coach Mike McCarthy told reporters he had no injury updates Monday evening. The Packers played without starting tackles David Bakhtiari (hamstring) and Bryan Bulaga (ankle) against the Falcons, and during the game lost several other regulars including defensive lineman Mike Daniels (hamstring), receivers Nelson (quad) and Cobb (shoulder) and safety Kentrell Brice (groin). McCarthy did say that none of the injuries appeared to be season-ending.