For the first time, Green Bay Packers players sat in protest during the national anthem. 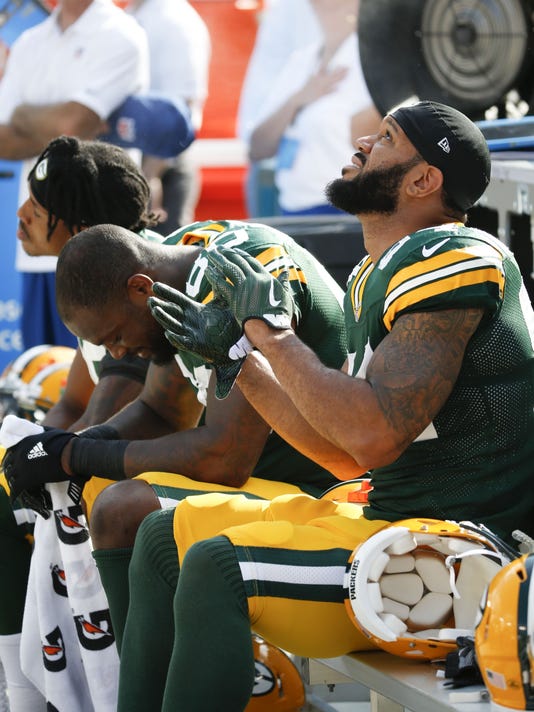 Green Bay Packers players (from left) Kevin King, Martellus Bennett and Lance Kendricks sit in protest during the national anthem before their game against the Cincinnati Bengals at Lambeau Field on Sunday in Green Bay.(Photo: Associated Press)

GREEN BAY – Kevin King had a big day ahead of him.

It was the Green Bay Packers rookie’s first NFL start, and this wasn’t easy. King, assigned Cincinnati Bengals receiver A.J. Green, had to cover one of the NFL’s best players.

In those fleeting moments before kickoff, his mind could’ve flooded with butterflies and schematics. Part nerves. Part adrenaline. Instead, when the national anthem started playing Sunday at Lambeau Field, King exercised his first-amendment rights, taking a stand by sitting on the bench.

“It was crazy,” King said, “because here I am, I’m going into my first game starting, and I’m following A.J. Green. And, of course, I know that. Before the game, I’m thinking about if I should kneel, and that says something there. Of course I’m focused on the game and everything, but in the back of my mind, I’m thinking, ‘What should I do in this situation?

“It was really a game-time decision. It’s hard, being a rookie. It’s hard. I had to think long and hard about it, because there’s a lot that can come with that.”

King was one of three Packers players who chose to sit during Sunday’s national anthem, joining tight ends Martellus Bennett and Lance Kendricks. It was the first time since NFL players started protesting inequality and police brutality last year that a Packers player sat during the national anthem.

Until Sunday, the closest a Packers player had come to protesting was Bennett lifting his right fist in the air during the national anthem before the team’s first two regular-season games.

SILVERSTEIN: Rodgers, WRs take over when it counts

Though their actions were boldest, the rookie cornerback and two veteran tight ends were not alone in their protest. Most, but not all, Packers players locked arms standing along the sideline. Across the field, Cincinnati Bengals players locked arms along the visitors’ sideline, though none of them sat or knelt.

Both teams joined a NFL-wide response to President Donald Trump’s comments Friday night at a rally in Huntsville, Ala.

“Wouldn’t you love to see one of these NFL owners,” Trump said, “when somebody disrespects our flag, to say, ‘Get that son of a (expletive) off the field right now? Out. He’s fired. He’s fired.”

INSIDER: Thumbs up to Jordy Nelson

"On this team, we’re going to keep choosing love over hate, unity over division, and that’s what it was to us," Rodgers told the media after the game. "In talking last night and this morning, the few of us who linked arms just wanted to show a united front. ... Today was about using our platform to promote love and unity and acceptance and togetherness, and I hope we did that.”

Across the league, teams responded in different ways. Players from the Pittsburgh Steelers and Seattle Seahawks stayed in their locker rooms during the national anthem. Many others locked arms like the Packers and Bengals.

RELATED: Should players protest on the field? Fans are divided

RELATED: Run D stands tall when it matters most

While unity was important, defensive tackle Ricky Jean Francois said their Saturday night meeting broke with an understanding each player had the freedom to choose their own response. Not every Packers player locked arms along the sideline. Among players who stood alone were kicker Mason Crosby, running back Jamaal Williams, guard Lane Taylor, tackle Kyle Murphy and punter Justin Vogel.

“So whatever your belief, is at the end of the day, that’s what we roll with. We’re not judging anybody in this locker room.”

Standing at his locker after the Packers’ 27-24 overtime win, the decision to sit through the national anthem still weighed on Kendricks. The Milwaukee native and former Wisconsin All-American said he considers himself an apolitical person. Kendricks made clear he intended no disrespect toward the U.S. military.

Kendricks’ grandfather is buried at Wood National Cemetery in Milwaukee, he said.

He didn’t plan to protest, Kendricks said, until the Lambeau Field public announcer asked the crowd to stand for the national anthem. While he joined his teammates’ protest against inequality and police brutality, Kendricks said he was most offended with what he perceived as Trump’s lack of respect and attention on natural disasters around the world, choosing instead of attack professional football players.

Kendricks’ wife, Danielle, is native of Puerto Rico, a Caribbean Island without power after Hurricane Marie.

“My wife is stressed out about what’s going on over there in Puerto Rico,” Kendricks said. “So I thought, ‘Maybe this is what I need to do. Maybe this is something I should do.’ It weighed heavy on me, and I had to do it. It was more than just a reaction.

“I feel for those people over there. It’s all about respect and coming together.”

Kendricks said he hadn’t decided whether Sunday’s protest was a one-time decision, or something he’ll continue. It was not an easy choice, he said. Usually, standing for the national anthem is routine, something players commit to muscle memory as part of their pregame process.

Sitting during "The Star-Spangled Banner," Kendricks said, felt odd. On this day, the chance to use his platform to increase awareness was too important to ignore.

“I’m not going to be somebody else, but there’s just so much going on around us, and we just have to bring light to some of that stuff sometimes.” 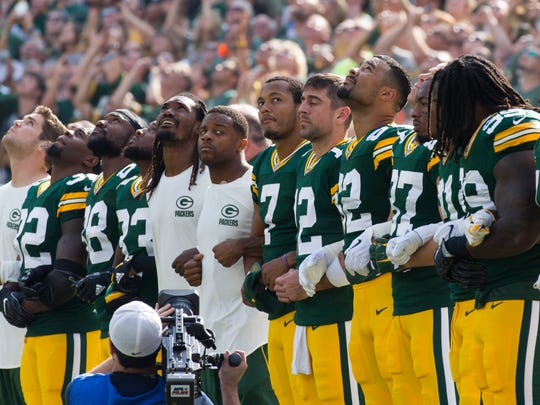 Members of the Green Bay Packers interlock their arms during the singing of the national anthem before their game against the Cincinnati Bengals Sunday, Sept. 24, 2017 at Lambeau Field in Green Bay, Wis. (Photo: Mark Hoffman/Milwaukee Journal Sentinel)