Rookie Justin Vogel getting the hang of Packers' punting priorities

The early success of Green Bay Packers punter Justin Vogel is a tale of height as much as heft.

Rookie Justin Vogel getting the hang of Packers' punting priorities

The guys at PackersNews.com give their predictions for Sunday afternoon's showdown between the Green Bay Packers and the Dallas Cowboys. 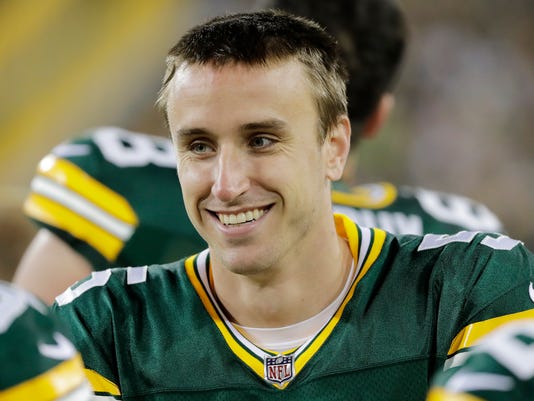 GREEN BAY - The early success of Green Bay Packers punter Justin Vogel is a tale of height as much as heft. Yes, Vogel seems to have a noticeably stronger leg than his two predecessors, Tim Masthay and Jacob Schum, but it’s the ability to wed altitude and angles that has separated the undrafted rookie thus far.

Of course, distance remains the primary measuring stick for punters and prospective punters around the league. Players who struggle to boot the ball more than 45 yards are unlikely to latch on at the highest level, regardless of accuracy.

So what the Packers have sought in recent years is someone who does both, someone who pairs distance with hang time. General manager Ted Thompson has looked for a player whose ability to change field position is not compromised by low line drives that invite returns. What he wants is a punter who booms the ball downfield with enough height to allow the coverage unit to swarm, and thus far, Vogel appears to fit the bill.

“I feel great,” Vogel said. “Obviously it’s been exciting, the whole process. Definitely played well in most of the games. I think it’s a good start to the season. Obviously you don’t know how it’s all going to go when the season gets underway. I think I’m off to a strong foot and I just have to keep momentum going.”

Equally as impressive is Vogel’s average hang time of 4.67 seconds, which obliterates the numbers posted by Schum (4.25 seconds) and Masthay (4.09 seconds) in their most recent seasons in Green Bay. And while hang-time numbers are unofficial stats tracked by the Journal Sentinel, multiple members of the coverage unit said they have felt a difference since Vogel took over, even if he has had a couple of miss-kicks along the way.

The individual punts support their observations. Four of Vogel’s 19 kicks have produced hang times in excess of 5 seconds, the longest of which was a 5.52-second bomb that yielded a fumble recovered by the Packers during a win over the Cincinnati Bengals. Ten of his punts have stayed in the air for at least 4.5 seconds, including eight of his last 12 attempts.

“We’ve noticed it throughout this season,” linebacker Blake Martinez said, “and it’s allowed us to just play more comfortable out there and knowing that the returner is going to be pretty close to us by the time we get down there. It allows us to all be there in one group and kind of — just like any special teams coach talks about — net him and keep him from kind of bouncing outside of us.”

But noticing a difference and taking advantage of it are two different things, and so far the Packers have done both. A year ago, the Packers allowed an average of 9.4 yards per punt return on 16 attempts for the regular season. They forced 20 fair catches and yielded 20 yards as their longest return.

This year, the Packers are allowing an average of 5 yards per return on nine attempts, aided in large part by their stellar pair of gunners, safety Josh Jones and wide receiver Jeff Janis. The Packers have forced four fair catches and once again yielded 20 yards as their longest return when Bengals wide receiver Alex Erickson, a former Wisconsin Badger, broke free.

Take away Erickson's scamper and the average return has been 3.1 yards on eight attempts.

“I remember just one play preseason with Josh how it was a 55-yard kick and he ran the guy down,” Vogel said. “The guy tried to turn, and he tackled him guaranteed. Guys like that are just a huge asset because if either one of them gets loose, it’s a problem. Either they commit to doubling them, which means now I get more time to punt the ball, which makes our interior easier, or they come with pressure, those guys are one on one, and one of them will win every time. They get down the field and either force fair catches or get an early tackle.”

The next two hurdles for Vogel will be continuing to improve his rapport with long snapper Taybor Pepper, who replaced the injured Brett Goode on Sept. 25, and adjusting to the cold weather that will sweep through Green Bay in the coming months.

When it comes to his new long snapper, Vogel said there is a difference in style between Pepper and Goode, the longtime veteran. Where Goode was a pillar of consistency and accuracy — the traits that explain why the Packers brought him back in each of the last two seasons — Pepper is a bit less predictable but throws a faster ball. His snaps take less time to reach Vogel, which in turn speeds up the operation and helps achieve the goal of punting the ball in under 2 seconds.

“I appreciate that because it makes everything a little bit faster for me, so it’s easier,” Vogel said. “If he’s faster and I’m slower, then that’s OK because we’re averaging the right time. But if he’s slower, I need to be faster so we’ve got to work together. If we’re both fast, obviously it helps out with the protection. The goal is always to be faster.”

Historically speaking, the adjustment to inclement weather can be far more difficult. Vogel, who signed with the Packers as an undrafted free agent in May, grew up in Tampa and kicked collegiately at Miami. His background is far different than that of Schum, who played for the University at Buffalo and was raised in a nearby suburb.

But even Schum struggled during his only winter with the Packers, and December was his worst month of the season by a wide margin in terms of net punting. Consider Schum's month-by-month averages from last season:

“The thing I told (Vogel) after the Atlanta game,” Zook said, “those are games that you've got to have good stats because of playing inside. Because we get into November, December here, it's a little harder to get that stat that you want. I think once again he just needs to continue to work on his craft. He's still inconsistent at times. But that's not unusual, that's kind of a normal thing.

“The thing we talk about is work on the technique, work on your craft and continue to get better. The more he does it, the better he's going to get.”