GREEN BAY – T.J. Lang doesn’t remember what the locker room looks like. He has seen it before, during training camp excursions with former teammate Josh Sitton, back when the two guards were pillars of the Green Bay Packers' offensive line.

They explored Lambeau Field and all its corners in the hours between meetings and practices. Occasionally, Lang said, he found himself inside the visitors’ locker room. He doesn’t recall now what brought him there, or what it looked like.

He’s about to find out.

“I know it’s a nicer facility,” Lang said, “when you’re comparing them to the rest of the league, but just talking to a couple guys, I think it’s a little bit smaller. But you’re used to that going on the road.”

The visitors’ locker room will be ground zero Monday night for an experience Lang won’t soon forget. He’ll play a football game inside Lambeau Field when the Packers host his Detroit Lions. It’s something Lang has done many times in the first eight years of his career.

This time will be different. This time, Lang will play against the Packers, the team that drafted him in the fourth round in 2008, and channel the emotions a homecoming brings.

Little is usually made of an offensive guard’s return to his original team. Lang, a former fan favorite for his enforcer-like mentality, is different. On Monday, he’ll be reunited with a place where his popularity endures, both within the Packers franchise and fan base.

He’ll just see it from a different perspective.

Lang said he still thinks fondly of the team and town he once called home. He has many friends here, including former offensive linemates David Bakhtiari and Bryan Bulaga. He respects coach Mike McCarthy, general manager Ted Thompson and president Mark Murphy, Lang said. He appreciates the Packers' starting his career after drafting him out of tiny Eastern Michigan.

“It wasn’t a burned-bridges type of split,” Lang said.

Lang wasn’t surprised his eight-year run with the Packers expired, he said. He knows how the franchise operates its business.

In 2012, before the final year of Lang’s rookie deal, the Packers extended him during training camp with a five-year contract worth $20.8 million. He was about to turn 25, entering the prime of his career. Over the next five seasons, Lang became one of the NFL’s best right guards.

When the next round of negotiations was up this spring, the Packers initially drew a hard line. Lang was about to turn 30, an age when most offensive linemen are usually exiting their prime. Eventually, they increased their offer slightly above $7 million average annually, but it never came close to matching Detroit’s three-year, $28.5 million deal that included $19 million guaranteed.

Yes, Lang said, he wanted to stay in Green Bay.

“At the same time,” Lang said, “I’m not stupid. I know there’s a lot of young guys in Green Bay that contracts are coming up. Corey Linsley, starting center, he’s a guy that’s going to need to get paid here soon. Davante Adams, stud receiver, I know he’s a guy that’s going to have to get paid here soon. So I kind of understood that line of thinking, that you know, ‘Hey, I was a young guy at one time that got rewarded for my play.’

“That’s the way Green Bay likes to do business: reward their own guys, bring them up through the ranks, and when it’s time, reward them for what they’ve done and keep them around.”

Lang said it was “definitely difficult” to leave the Packers this spring in free agency. Thompson and chief negotiator Russ Ball made it easier, never seriously approaching the Lions’ offer.

The Packers' personnel department might not have been wrong. Thompson signed veteran Jahri Evans to a one-year, $2.25 million contract, saving at least $5 million this season. Evans, avoiding the Packers' injury bug, has been one of the team’s most reliable offensive linemen this fall.

Still, Evans is four years older than Lang. The Packers will enter this spring without a long-term replacement for their former Pro Bowl guard.

Lang said he was “a little bit” miffed with their decision not to match the Lions’ offer, though he understood their hesitancy. He had hip surgery after the 2016 season, an operation designed to extend his longevity. McCarthy said there’s been no slippage in Lang’s play this fall.

“T.J. is playing good,” McCarthy said. “I don’t like the colors he’s wearing, but he looks good out there. Boy, I'll tell you, just the way he jump sets, particularly in the pass game, I always thought he was the best in the game at that, particularly in pass protection. He’s playing well.

“Frankly, in our breakdown with the personnel department and as a coaching staff, we feel he’s their best lineman, and he’s having a good year.”

RELATED: Did Packers have interest in Brian Hoyer?

Now, the Packers will have to deal with Lang on Monday and, if he stays healthy, again in their finale. Peel back the layers, and it’s clear this won’t be just like any other game. To think T.J. Lang, one of the league’s fiercest competitors, doesn’t want to make his old team pay — after his old team literally would not pay — is hoping for some alternative reality.

From the visitors’ locker room, Lang will get a chance Monday night to show what the Packers are missing.

“It’s kind of rare for guys just to stay in one spot the longer you want to play,” Lang said. “It’s a lot more rare than it used to be. It used to be before free agency and everything, guys would play their whole career in one city, and I think that’s everybody’s goal. You want to build a legacy. At the end of the day, when you reach a certain age, you’d like to finish your career in the same spot you started it, because you understand it’s not a very common thing to do that.

“But when the time came, and we had to handle business, I think it just turned out the way that it was.” 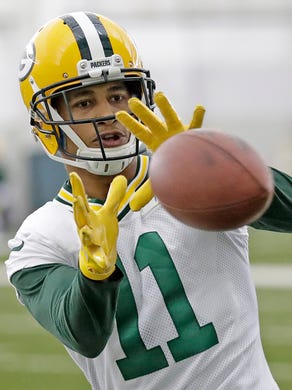