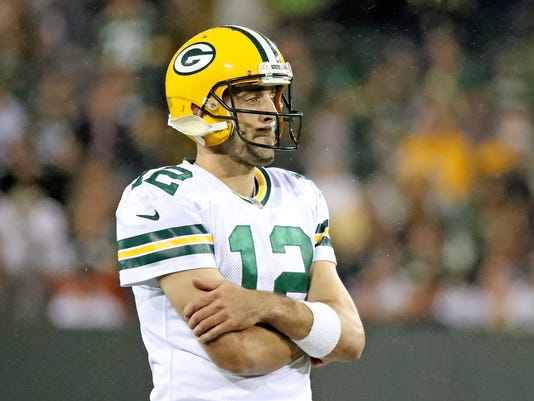 GREEN BAY - Without a sling, and with considerably less pain than he originally endured, Green Bay Packers quarterback Aaron Rodgers addressed the media Friday for the first time since breaking his right collarbone 19 days prior.

“It’s good to be back,” Rodgers said in the Packers' locker room. “Good week for me last week having surgery and then getting to stay out west for the initial rehab and checkup. But it’s good to be back here with the guys.”

Rodgers underwent surgery to repair an injury he said was “significantly different” and “much more intense” than the broken left collarbone he suffered in 2013, which sidelined him for seven games. This time Rodgers’ right collarbone fractured under the weight of Minnesota Vikings linebacker Anthony Barr, who hit the quarterback after a pass was released. The NFL deemed Barr’s hit to be legal; Rodgers believes a two-hand shove would have sufficed.

Nonetheless, the surgical procedure was performed in California at a location handpicked by Rodgers, though he declined to share the name. Doctors inserted a plate and an unspecified number of screws into his collarbone to stabilize the fracture, Rodgers said, and all sides were pleased with the end result.

DOUGHERTY: Without Aaron Rodgers, Packers are just another team

Rodgers remained in California through the bye before returning to Green Bay this week, joining the rest of his teammates in their preparation for Monday’s game against the Detroit Lions.

“Well, the beauty of it was (team doctor) Pat (McKenzie) and I have a very close relationship,” Rodgers said. “He’s done surgery on me a couple of times and he encouraged me to find a great trauma doc to do this, and I looked into a few different people. There’s some incredible, talented doctors out there. Settled on some folks that made the most sense from a location standpoint for me. As far as how many different things I researched, I had three days of sitting on my butt to research stuff, so it was plenty of interesting articles and reads.”

In addition to researching doctors, Rodgers dedicated a portion of those first three days to the “grieving” attached to missing what might be the remainder of the season. He dedicated another portion of his time to researching holistic methods that are believed to accelerate healing.

“I talked to a lot of people during that time,” Rodgers said. “And obviously I have a lot of down time now, a lot of rabbit holes I can go down as far as healing and alternative ways of (decreasing) that time that are obviously natural and legal and safe. But ultimately it comes down to the blood flow to that area and how fast it lays down some bone there.

“The first couple days were really hard. The pain, obviously, was intense. But you settle into starting to see the light at the end of the tunnel. For me, that’s being healthy and hopefully as soon as possible. Obviously, it’s disappointing not to be out there after all the hard work you put in during the offseason and just how much you put into this each week. But some things are out of your control, and right now that rehab and that bone healing is out of my control. Just hopefully I can heal up as quick as possible.”

Whether Rodgers can return this season is contingent upon his rate of healing, and more specifically how quickly the bone fuses around his newly installed hardware. The baseline for a potential return was established when the Packers placed Rodgers on injured reserve on Oct. 20, guaranteeing he will miss a minimum of eight weeks. He is eligible to begin practicing after six.

Still, Rodgers expressed a great deal of caution when discussing his immediate future during a 16-minute interview at his locker. The possibility of missing the entire season — first floated by the Packers during the very game in which Rodgers was injured — remains extremely real. Rodgers, 33, made it clear he will not push the envelope for the sake of salvaging whatever might remain of the 2017 Packers season by mid-December.

“The only reason to come back would be that I’m healed completely,” Rodgers said. “If that doesn’t happen in eight weeks, there’s not even a conversation.

The interim calendar figures to gnaw at Rodgers’ patience as rehab takes up portions of each day but leaves far too many hours unassigned. His workouts consist of conditioning the lower body while increasing strength and range of motion in his shoulder, all of which have gone well so far. Rodgers said the pain has decreased significantly since the day of his procedure, and now the most important part is the healing of the bone.

“I feel good about the structure, with the way the operation went and the plate and the screws,” Rodgers said, “but it comes down to how that thing unions back together.”

As for football, Rodgers said he fidgeted through last week’s game against the New Orleans Saints while watching on a television in California, his teammates falling short at Lambeau Field. There were times he left the room, Rodgers said, because an environment of “armchair quarterbacks” was too much to endure.

But with a return to Green Bay comes the opportunity to work more closely with backup Brett Hundley, who has looked unimpressive in one relief appearance and one start. Rodgers said he is willing to help Hundley in whatever way his protégé desires, and that may include something of a hands-off approach during the week.

“Maybe stay out of the way, to be honest,” Rodgers said. “It’s giving him space to be the guy but helping him as much as he wants. He’s a fantastic friend and player, and he’s got an opportunity now. I’m around and I’m an ear to listen and to bounce things off of. But he’s got a great quarterback coach and offensive coordinator and head coach who have been helping him out. He spent time here during the bye week. My role is to help him as much as I can and continue to give him the things he needs, as much or little as that is.

“I think now that the mental part is cleared up for me and I can see there’s a light at the end of the tunnel, there’s other things to be done, accomplished. First and foremost is being a good teammate to Brett and the guys and encourage them to go out and win some games. In the meantime, I’ll be tightly connected to the preparation during the week and what we’re doing and just stay in it mentally. That’s how I feel like I’m still part of this even though I’m on injured reserve.”

The Packers will know by mid-December if Rodgers' role is destined to change or if his season is truly done. And until then, as Hundley and backup Joe Callahan sink or swim, the only thing to do is wait.

“If we’re healthy in eight weeks and it would make sense to come back,” Rodgers said, “then I’m going to come back.”