Against a Lions team that entered with three straight losses, the Packers were often their biggest foil.

GREEN BAY – Brett Hundley’s pass found receiver Davante Adams for 8 yards late in Monday night’s first half, and normally that would be good.

On an evening the Green Bay Packers finished with fewer than 300 yards, any forward movement could be confused as positive. They need baby steps in Green Bay as an offense picks up the pieces and learns to live without Aaron Rodgers.

Except, in this moment, Adams’ eight yards were in the middle of the field. There were barely 10 seconds left before halftime, and the Packers were without timeouts. The mad scramble that followed — picture a hockey shift change — exemplified the Packers listless, sometimes unhinged 30-17 loss to the Detroit Lions.

Yes, the Packers' last-second, 35-yard field goal was good. Yet even when something went right for the Packers, it was usually difficult, if not sloppy.

Most times, things did not go right.

DOUGHERTY: No cavalry coming to save Packers' season

PACKERS INSIDER: Thumbs down to the defense

RELATED: Mike Daniels ready to 'deliver some blows' vs. rivals

Against a Lions team that entered with three straight losses, the Packers were often their biggest foil. They entered Monday night off their midseason bye week, given 15 days to prepare for the Lions. The Packers apparently could have used more time.

There was new long snapper Derek Hart’s bouncing snap that prevented the Packers opening drive from ending in points.

On his play-calling script, coach Mike McCarthy started Monday’s game mixing personnel. The Packers rummaged through formations using two-tight end, four-wide and fullback sets, each snap something different. It was successful, helping quarterback Hundley march the offense 58 yards on a 15-play drive that lasted more than eight minutes. The drive stalled just before the red zone, but the Packers had a 38-yard field-goal attempt to take an early lead.

Hart, signed this week, bounced the snap back to holder Justin Vogel. With their timing off, the football was too low coming off Mason Crosby’s foot, and Lions defensive lineman A’Shawn Robinson blocked it.

There was the Packers defense’s initial third down on the ensuing series.

“I’m like, when are we going to retaliate?” Daniels asked his defense Saturday. “I’m not saying knock anybody out, but I’m saying make opposing offenses … not too excited about having to line up across from us. That’s a rivalry game. these guys come in with bad intentions and bad blood against us.

“They knocked out one of our best receivers – one of the better ones in the league — out of the game. dirty hit. Knocked out quarterback out. I don’t know how long he’ll be out. We’ve got to deliver some blows ourselves.”

Daniels didn’t take long to deliver a blow. After the whistle, the veteran shoved Lions tackle Brian Mihalik. He was called for a 15-yard penalty, prolonging a Lions drive that had stalled.

Six plays later, the Lions had their first touchdown of the game on a 25-yard pass from Stafford to receiver Marvin Jones, giving them a lead they never surrendered.

There was Hundley’s inability to spark the Packers offense in his second straight start.

Never was that more apparent than early in the second quarter. Lions kicker Matt Prater, one of the league’s best, doinked a field goal off the crossbar from 55 yards out. It gave the Packers possession at Detroit’s 45-yard line, a short field trailing by only 7 points.

Three plays later, the Packers had gained one yard. Rookie punter Justin Vogel pinned the Lions deep at their own 8, but the Packers defense allowed a 92-yard touchdown drive. Their 14-point deficit with just under three minutes left before halftime shouldn’t have felt insurmountable, but this is a different Packers offense.

Hundley was a more efficient passer than two weeks prior against the New Orleans Saints, but not more explosive. He completed 26-of-38 passes (68 percent) for 245 yards, almost tripling his 87 yards against the Saints. But, while Hundley didn’t throw an interception, he also didn’t have a passing touchdown. His 86 rating and 6.4 yards per pass showed everything there is to know about the current state of the Packers passing attack.

With the loss, the Packers dropped to 4-4 at their season’s midway point. They now have six days before playing in Chicago, a team they beat by three touchdowns in late September. Of course, that was with Aaron Rodgers at quarterback.

In the wake of their late, game-winning touchdown at Dallas last month, it seemed plausible the Packers would not lose four games this season. Their victory over the Cowboys improved them to 4-1. The Packers appeared to be the class of the NFC.

Three straight losses later, and the Packers are staring at a new reality. So, at the end, perhaps nothing more encapsulate the franchise’s troubles better than the tubas.

Before the fourth quarter, University of Wisconsin tuba players marched in a circle in a Lambeau Field concourse, tooting their horns. It was meant to inspire a paid crowd of 77,575 that usually goes bonkers before the final 15 minutes. This time, with the Lions poised to seal their win with possession 1 yard from the goal line, nobody felt like celebrating.

In a moment of unintentional comedy, there was nothing but the sound of tubas filling Lambeau Field. A fitting soundtrack for where this season might be headed.

Detroit Lions running back Ameer Abdullah (21) tried to stay in bounds near the goal line against the Green Bay Packers on Monday, November 6, 2017, at Lambeau Field in Green Bay, Wis.The Lions defeated the Packers 30 to 17. Wm. Glasheen/USA TODAY NETWORK-Wisconsin
Fullscreen

The Green Bay Packers defense prepares to take the field in the fourth quarter against the Detroit Lions on Monday, November 6, 2017, at Lambeau Field in Green Bay, Wis. The Lions defeated the Packers 30 to 17. Wm. Glasheen/USA TODAY NETWORK-Wisconsin
Fullscreen 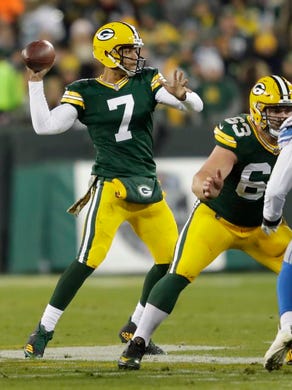 Detroit Lions running back Ameer Abdullah(21) loses the ball near the goal line against the Green Bay Packers on Monday, November 6, 2017, at Lambeau Field in Green Bay, Wis. He was ruled down. The Lions defeated the Packers 30 to 17. Wm. Glasheen/USA TODAY NETWORK-Wisconsin
Fullscreen 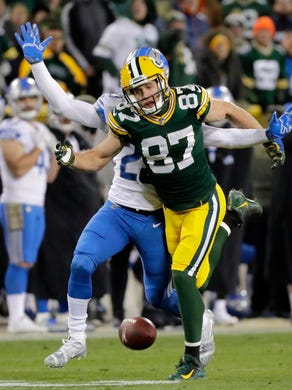 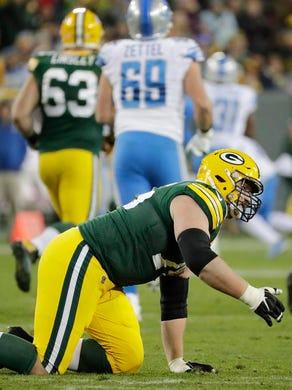 Green Bay Packers offensive tackle Bryan Bulaga (75) gestures to the bench after going down hurt on a play against the Detroit Lions in the third quarter at Lambeau Field on Monday, November 6, 2017 in Green Bay, Wis. Adam Wesley/USA TODAY NETWORK-Wi
Fullscreen

Detroit Lions running back Theo Riddick (25) reacts after being ruled down short of the goal line in the fourth quarter at Lambeau Field on Monday, November 6, 2017 in Green Bay, Wis. Adam Wesley/USA TODAY NETWORK-Wi
Fullscreen 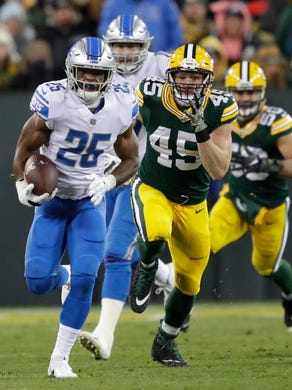 Detroit Lions running back Theo Riddick (25) breaks away for a long run down to the 12-yard line against Green Bay Packers outside linebacker Vince Biegel (45) in the fourth quarter Monday, November 6, 2017, at Lambeau Field in Green Bay, Wis. Dan Powers/USA TODAY NETWORK-Wisconsin
Fullscreen 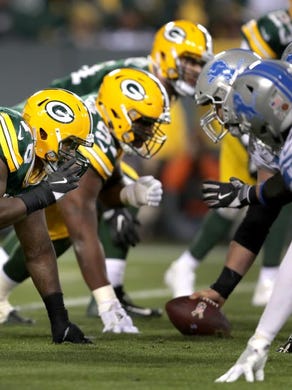 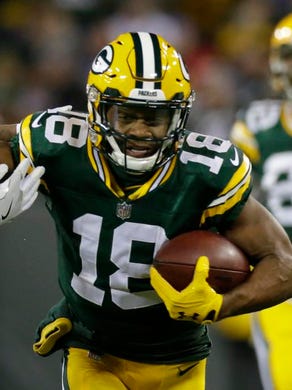 Green Bay Packers running back Aaron Jones warms up before their game against the Detroit Lions on Nov. 6, 2017, at Lambeau Field. Jim Matthews/USA TODAY NETWORK-Wis
Fullscreen