Jamaal Williams delivers when Packers need it most

Jamaal Williams did what nobody could have predicted, leading the Packers with 20 carries for 67 yards in a 23-16 win vs. the Bears.

Jamaal Williams delivers when Packers need it most

Green Bay Packers running back Jamaal Williams (30) dives through a hole for a first down on fourth and 1 against the Chicago Bears Sunday, November 12, 2017 at Soldier Field in Chicago, Il.(Photo: Jim Matthews/USATODAY NETWORK-Wi)

CHICAGO – Jamaal Williams almost wore sleeves under his shoulder pads. Because there was no way he was carrying the football Sunday afternoon.

Over the past month, the Green Bay Packers rookie running back drifted further into obscurity. He was behind Aaron Jones, behind Ty Montgomery. Williams understood the unwritten rules at his position, that sleeves are taboo. Wrapping a running back’s arms in loose material, he knows, is asking for fumbles.

But it gets cold on the sideline.

That’s where Williams expected to be when the Packers offense was on the field against the Chicago Bears. Envisioning Chicago in November, the frigid rain and biting wind off Lake Michigan, Williams arrived at Soldier Field planning to wear sleeves.

“Usually I’m on the special teams,” Williams said. “You aren’t really carrying the ball. So might as well just be warm.”

Williams ditched the idea, he said, after feeling warmer than expected during pregame warmups. He couldn’t have known then how useful that decision would become.

Williams filled a role Sunday nobody – especially him – saw coming, leading the Packers with 20 carries for 67 yards in a 23-16 win against the Chicago Bears. The victory was every offensive lineman’s dream. With Brett Hundley at quarterback, the Packers rushed 37 times for 160 yards.

“We definitely proved that we can be a power team if need be,” left tackle David Bakhtiari said. “And the strength of their defense is their front. It was a dog fight out there. There was a lot of rain, and it’s going to be messy in there. It was a fun game.”

Williams, unexpectedly, was in the center of it.

He was an emergency solution Sunday, nothing more. After the Packers lost their top two tailbacks to injuries, coach Mike McCarthy had no choice but to put his run game on Williams’ back. The Packers were out of healthy tailbacks on their 46-man game-day roster.

Jones started and had three carries for 12 yards on a promising opening drive that ended with a field goal. Then he was carted to the locker room with a knee injury, and never returned.

Starting with the second drive, McCarthy put the run game in Montgomery’s hands. Things were going well for Montgomery, who has his best games against the Bears. He gave the Packers their first touchdown, untouched 37 yards on a perfectly-blocked run early in the second quarter.

Montgomery almost finished the first half. But there’s something else he seems to do against the Bears. After breaking his ribs in his first game against Chicago this season, Montgomery left Sunday’s game with another rib injury and didn’t return.

INSIDER: Thumbs up to Hundley, down to tight end moves

RELATED: Run defense bests Bears in battle in the trenches

“I went up to him,” Bakhtiari said, “I told him, ‘Hey, you just keep playing behind your pads. You’re going to spring one.’”

The Packers initially appeared almost reluctant to thrust Williams into the workhorse role. He had 13 yards on three carries to start the second half, but stayed on the sideline when the Packers faced third-and-1 from inside Chicago’s 10-yard line.

McCarthy kept the football in Hundley’s hands. He threw away incomplete after Bears linebacker Leonard Floyd pressured him back more than 20 yards behind the line of scrimmage.

Williams got his number called more as the second half progressed. Later in the third quarter, he failed to convert a third-and-2 near midfield. McCarthy gave it back to Williams on fourth-and-1, and the rookie broke through the levy to extend a drive the ended with Mason Crosby’s 50-yard field goal.

“Jamaal ran hard and physical,” McCarthy said. “He had hard ball runs, overloaded box runs, 4-3 double edges. He did a heck of a job today to keep the sticks moving. I really liked the way he played.”

Hard, physical runs is what Williams gives the Packers offense. He is not Aaron Jones, a home-run threat on any given snap. He is not Ty Montgomery, a matchup problem for linebackers and safeties in the passing game.

Williams puts his head down, runs hard and, occasionally, plows defenders onto their backside. Like he did against Kyle Fuller. The Bears cornerback was between him and the first down, so Williams took the shortest route, through Fuller’s chest.

As much as Williams said he wants to prove he can get yards outside the tackles, it isn’t his strength.

There’s a reason Williams fell behind Jones on the depth chart. He usually doesn’t spring one, no matter how many carries. His longest run Sunday was 7 yards.

Williams’ lack of big-play threat was especially evident on the fourth down. He hopped up from the grass after crossing the marker, but he wasn’t celebrating. Seeing open field between him and the end zone, Williams was still upset with himself in the locker room.

“Honestly,” Williams said, “I should’ve kept my head up. I could’ve scored.”

Williams didn’t score against the Bears, and his 3.3 yards per carry probably won’t send fantasy football owners scurrying to the wire. But there are times like Sunday, afternoons with weather so bad even a running back considers wearing sleeves, days a downhill running style is necessary.

The game is a little messy, a dog fight.

An offense needs a running back who plays behind his pads.

Williams showed against the Bears he’s good for that role.

“He brought some toughness,” left guard Lane Taylor said. “He runs downhill. He wasn’t scared. This was like his first, real action that he got. So that gives us confidence in him, and it kind of juices up the team when you see him run over a guy for a first down.” 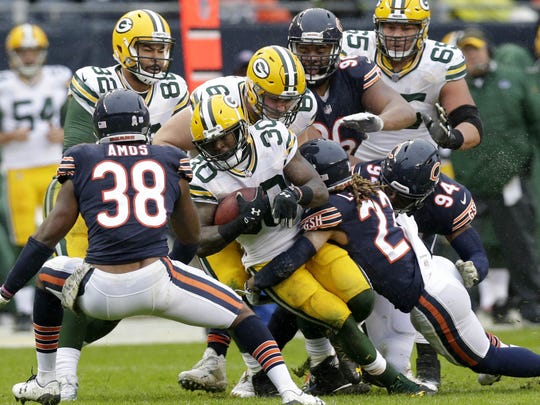