The Green Bay Packers’ run defense will have a massive hurdle to climb if nose tackle Kenny Clark misses significant time with an ankle injury. 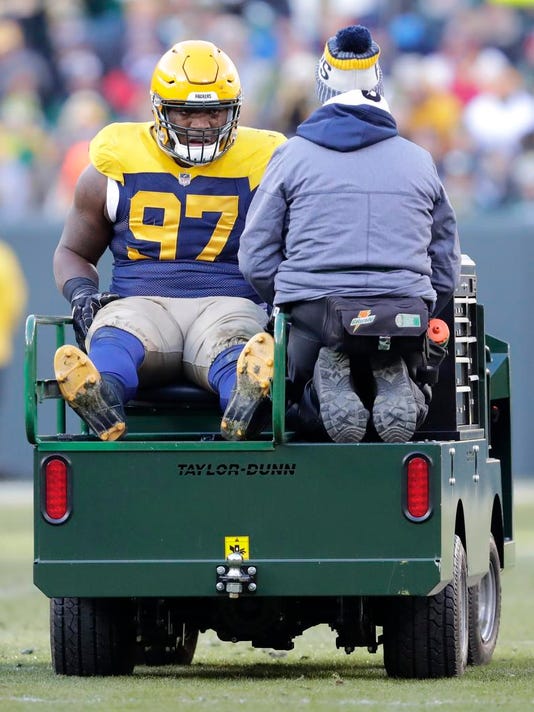 Clark was carted off the field in the fourth quarter Sunday after getting bent backward in a pile near the line of scrimmage. His right leg and ankle were trapped beneath another player’s body as Baltimore Ravens guard Ryan Jensen appeared to make the awkward angle worse by shoving Clark toward the ground.

After the game, safety Ha Ha Clinton-Dix and cornerback Davon House expressed their displeasure with Jensen’s actions. Clinton-Dix called it a "dirty play."

“The play that Kenny Clark was injured on, I think clearly Kenny is in a compromised position,” McCarthy said. “Obviously you’ve got a physical game going on there on the interior. I thought it was unnecessary, definitely an injury that could have potentially been avoided.”

McCarthy did not have injury updates for Clark, outside linebacker Clay Matthews (groin) or offensive lineman Justin McCray (ankle), all of whom failed to finish Sunday’s loss to the Ravens. Team doctor Patrick McKenzie was continuing to gather information on the injured players Monday at Lambeau Field.

“That’s why we’re running a little late here,” McCarthy said. “The training room, Dr. McKenzie is actually seeing all those guys right now. The scans and information is still coming in.”

A report from NFL Network said X-rays on Clark’s ankle came back negative, and it is believed he only suffered a sprain. The severity of the sprain is unknown.

Clark seemed to indicate that he avoided serious injury, tweeting Monday: "Appreciate all the prayers, I'll be fine."

Appericate all the prayers, I’ll be fine🙏🏾

Losing Clark for any significant period of time could be devastating to a defense that has played well against the run in recent weeks. Clark is arguably the most consistent player the Packers have on that side of the ball, and his athleticism in the trenches has paired beautifully with the raw power of defensive end Mike Daniels.

Through 10 games, Clark has 32 tackles (including three tackles for loss), one quarterback hit, one pass defensed and one forced fumble.

The most likely replacement for Clark — if necessary — would be defensive tackle Quinton Dial, who could slide in at nose tackle in the base defense. Dial has proved fairly stout against the run but lacks the explosiveness and lateral speed of Clark.

Rookie Montravius Adams, who was inactive against the Ravens, would have to contribute as well. He would be the fourth defensive lineman behind Daniels, Dial and Dean Lowry.

“That’s a challenge,” defensive coordinator Dom Capers said. “That’s going to be a challenge. Kenny’s been playing extremely well. We’ve liked our matchups with Kenny in there. He gets a lot of double teams in there. We’ll have to go to work and see what we come up with here in terms of trying to make up if we don’t have Kenny.”