Four observations the day after the Packers' 31-28 loss to Pittsburgh.

Pete Dougherty and Aaron Nagler discuss the Green Bay Packers' loss to the Pittsburgh Steelers and what it means going forward. 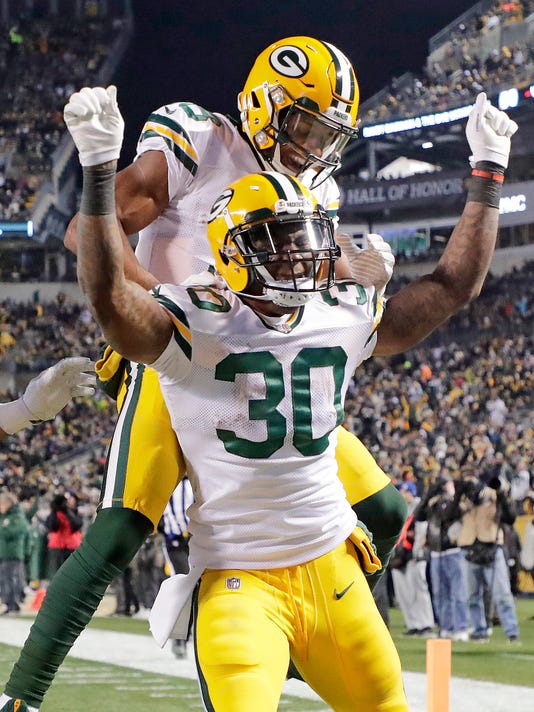 Every week I’ll share four observations the day after the Green Bay Packers' game. Here they are after the Packers’ 31-28 loss to Pittsburgh on Sunday night:

Guess we can safely say rookie running back Devante Mays is in coach Mike McCarthy’s doghouse. Mays, a seventh-round pick, didn’t play a snap Sunday even though he was on the game-day roster and was one of only two halfbacks healthy for this game — Aaron Jones (knee) and Ty Montgomery (ribs) didn’t suit up because of injuries. Mays fumbled on the first two carries of his career last week against Baltimore. With how much McCarthy wanted to run the ball against the Steelers’ physical defense, you would have thought he’d want to take some hits off starter Jamaal Williams. But Williams had 21 of the Packers’ 22 carries by running backs, and fullback Aaron Ripkowski had the other. McCarthy clearly wasn’t ready to trust Mays.

RELATED: Packers can't pull off the upset in Pittsburgh

SILVERSTEIN: Too many 'ifs' lead to Packers' demise

RELATED: King must learn from failures against NFL's elite

DOUGHERTY: Packers' playoff hopes on the ropes after falling short

You can’t say Steelers rookie outside linebacker T.J. Watt had a big night in his first game against the Packers, but the first-round draft pick the Packers passed over at No. 29 overall did make one eye-catching play. It came in the third quarter in pass coverage, not as a rusher. On a second-and-15, Watt had to cover Jordy Nelson on a slant route from the slot, and he was able to stay tight on the receiver and knock down the pass to put the Packers in third and long. That’s a tough matchup for a 252-pound player, but Watt made the play. Watt also had a sack in the fourth quarter when he started a play spying Brett Hundley then rushed up the middle when he saw an open lane.

The Packers’ pass rush has been lacking even with Clay Matthews in the lineup, and it was even more of a liability Sunday night with Matthews on the inactive list because of a groin injury. On most of his passes, Ben Roethlisberger had plenty of time to sit in the pocket and go through his reads, or maybe step up to avoid some outside pressure and make an unimpeded throw. Even the Packers’ lone sack, by Mike Daniels, came on a play where Roethlisberger held the ball forever. On the official stat sheet, the Packers had only one other hit on Roethlisberger, by Nick Perry. That helps explain Roethlisberger’s 351 yards passing.

Second-year cornerback Josh Hawkins had a rough time in place of Kevin King, who missed the rest of the first half after aggravating a shoulder injury on the Steelers’ first drive. Steelers receiver Antonio Brown made such a quick juke and move on an out route in the second quarter that Hawkins fell down, which allowed an easy 13-yard completion. And Martavis Bryant later got wide open on an in-and-out move for a 17-yard touchdown in the corner of the end zone in the second quarter. King returned to play most of the second half, though Hawkins played regularly as well in place of Damarious Randall, who missed some time because of cramps. 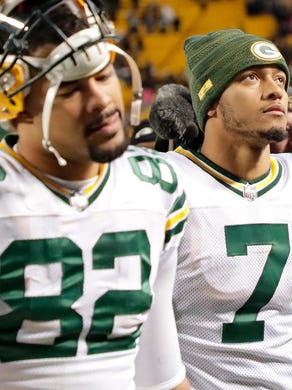 Pittsburgh Steelers running back Le'Veon Bell (26) picks up 10 yards on a reception before being tackled by Green Bay Packers inside linebacker Blake Martinez (50) during the fourth quarter of their game Sunday, November 26, 2017 at Heinz Field in Pittsburgh, Pa. Mark Hoffman/Milwaukee Journal Sentinel
Fullscreen 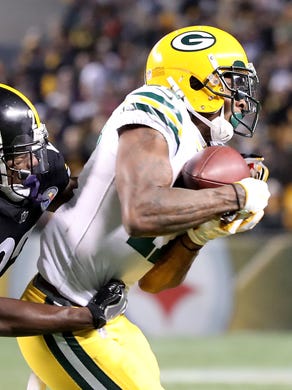 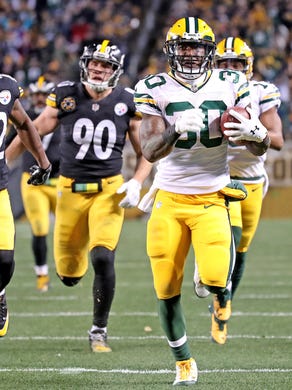 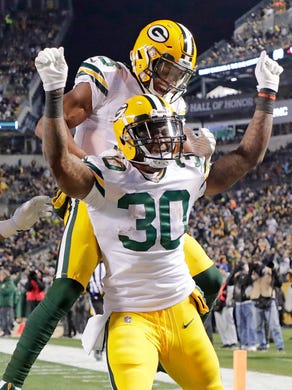 Pittsburgh Steelers wide receiver Antonio Brown (84)is tackled by Green Bay Packers cornerback Davon House (31) after making a catch for a first down during the the first quarter of their game Sunday, November 26, 2017 at Heinz Field in Pittsburgh, Pa. Mark Hoffman/Milwaukee Journal Sentinel
Fullscreen

Pittsburgh Steelers wide receiver Antonio Brown (84)is tackled by Green Bay Packers cornerback Davon House (31) after making a catch for a first down during the the first quarter of their game Sunday, November 26, 2017 at Heinz Field in Pittsburgh, Pa. Mark Hoffman/Milwaukee Journal Sentinel
Fullscreen

Green Bay Packers linebacker Clay Matthews warms up before their game against the Pittsburgh Steelers, for which he was inactive, on Nov. 26, 2017, at Heinz Field in Pittsburgh. Jim Matthews/USA TODAY NETWORK-Wis
Fullscreen 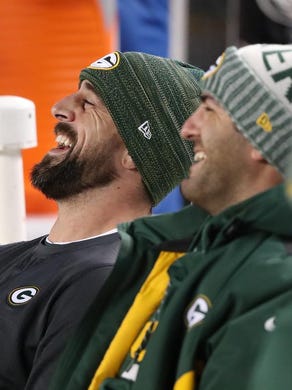 Green Bay Packers quarterback Aaron Rodgers (12) laughs as he sits on the bench before the game against the Pittsburgh Steelers at Heinz Field on Sunday, November 26, 2017 in Pittsburgh, PA. Jim Matthews/USA TODAY NETWORK-Wisconsin
Fullscreen 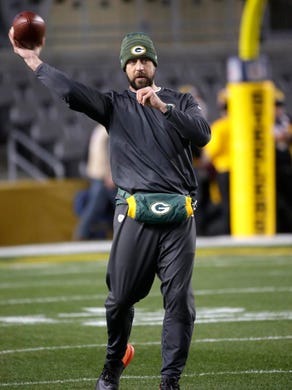