The Packers' anemic offense had done everything the coaches dreamed of Sunday night. It made Sunday’s loss awkward for the Packers to describe. 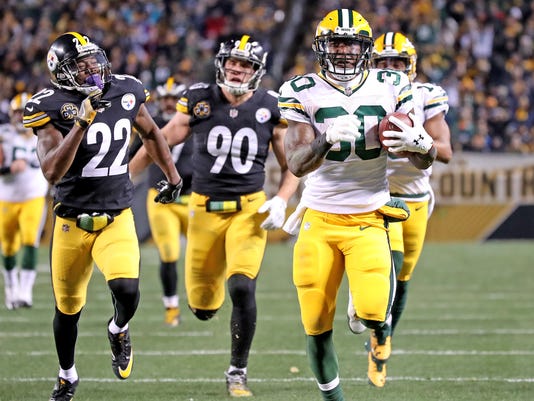 PITTSBURGH — If time had frozen as running back Jamaal Williams plunged into the end zone for a tying score, consider the state of the Green Bay Packers with 2 minutes remaining in a game they were never supposed to win.

Their quarterback, Brett Hundley, had responded from a four-turnover debacle last week to throw for 245 yards and three touchdowns with a passer rating of 134.3, nearly 30 points higher than that of his counterpart, Ben Roethlisberger of the Pittsburgh Steelers.

Their rookie tailback, Williams, had played nearly every snap in the absence of Aaron Jones (knee) and Ty Montgomery (ribs) while pounding his way to 135 total yards and two touchdowns.

Their offensive line, equipped with a new right tackle, had neutralized one of the league’s best pass-rush units and allowed only three sacks in 58 minutes, none of which produced a fumble.

Their offense had jolted to life.

“We know what we’re capable of,” left tackle David Bakhtiari said. “We can go out there and execute. We’ve just got to be consistent and show (it) week in and week out. And we’ve got to put together all three phases for four quarters. The most important thing at the end of the day is a W, so whatever productivity we put out there, we’ve got to be able to finish.”

SILVERSTEIN: Too many 'ifs' lead to demise

DOUGHERTY: Playoff hopes on the ropes

INSIDER: Thumbs up to Hundley, receivers

Which is why the aftermath of Sunday’s loss to the Steelers was so awkward for the Packers to describe. Their anemic offense had done everything the coaches dreamed in the absence of starting quarterback Aaron Rodgers — establishing the run, protecting Hundley, big plays downfield, sustaining drives — and yet it none of it mattered when kicker Chris Boswell drilled a 53-yard field goal as time expired.

“Being a competitor, it’s going to hurt, you’re going to feel it a little bit, especially when it’s this type of loss,” wide receiver Davante Adams said. “It was a close game, it came down to the wire and it hurts when you don’t finish it off. But I think this team can rally together and, you know, finish strong.”

Juxtaposed with the shellshock in Minnesota, when Hundley threw three interceptions in relief of Rodgers, and the devolving calamities against New Orleans, Detroit and Baltimore, what the Packers did Sunday night qualified as an offensive revolution.

One week after coach Mike McCarthy called four times as many passes as runs in the first quarter, he returned to his roots by feeding Williams and softening the defensive front. Williams carried four times for 12 yards on the opening possession, which ended with a touchdown pass to wide receiver Randall Cobb, and had a minimum of three rushing attempts in every quarter. He gained 66 yards on 21 carries and dished out as much punishment as he took.

RELATED: King must learn from failures

“He brought a lot of swagger and he’s a strong man, he likes to hit,” Bakhtiari said. “For him it’s just (about) getting blinders on when you see the field, see the hole and then hit that hard. He’s just built in consistency and he came out and had a strong game and got in rhythm.”

The steady peppering from Williams dovetailed with explosive gains through the air, something the Packers have lacked since mid-October. There was a 39-yard touchdown to Cobb after a blown coverage along the sideline; a 54-yard screen to Williams in which center Corey Linsley secured the crucial block en route to the end zone; and a deep ball to Adams yielded a 55-yard touchdown when the safety whiffed inside the 10-yard line.

The Packers paired their quick-strike offense with impressive sustainability near the midway point of the fourth quarter. With his team trailing by a touchdown, Hundley trotted onto the field with 8 minutes, 42 seconds remaining for perhaps the most impressive possession of his young career: 12 plays, 77 yards and the tying touchdown just before the 2-minute warning against a legitimate Super Bowl contender. And the drive was everything McCarthy could have wanted.

There were rhythm throws to Adams (12 yards) and tight end Richard Rodgers (25 yards) over the middle of the field. There was a bootleg pass to Cobb (12 yards) and a run-pass option to Jordy Nelson (7 yards), a quick screen to Cobb (6 yards) and a gutsy fourth-down conversion to Adams (4 yards) against tight coverage. Hundley inched the offense to the 4-yard line, and Williams pin-balled in for the tying score with 2 minutes, 8 seconds remaining.

Until time unfroze with the Steelers having one last chance.