In addition to losing rookie cornerback Kevin King, the Packers are likely to be without fellow starter Davon House as well.

Aaron Nagler speaks with Michael Cohen of the Milwaukee Journal Sentinel about the banged up secondary the Green Bay Packers will have to work around as they take on the Cleveland Browns. (Dec. 8, 2017) 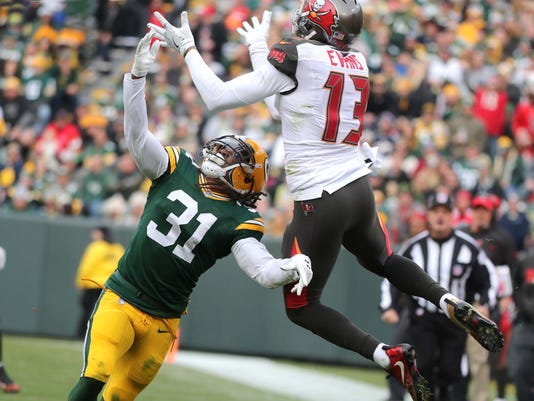 GREEN BAY - In addition to losing rookie Kevin King, who was placed on injured reserve this week, the Green Bay Packers are likely to be without fellow starting cornerback Davon House as well Sunday against the Cleveland Browns.

House officially was listed as doubtful on Friday’s injury report with a shoulder problem suffered against the Tampa Bay Buccaneers. Though he finished Sunday’s game at Lambeau Field, House indicated the injury could be serious when speaking to reporters after the win. He did not practice this week.

Without House, the Packers likely would start Damarious Randall and Josh Hawkins as their two perimeter corners. Safeties Morgan Burnett and Jermaine Whitehead could be asked to play the slot positions in nickel and dime personnel packages for the second consecutive week.

Cornerback Demetri Goodson (hamstring) was ruled out and will not be available for Sunday’s game, postponing his long-awaited return from the gruesome knee injury suffered last November. With Goodson, King and House all sidelined, the only other healthy cornerbacks are undrafted rookies Lenzy Pipkins and Donatello Brown. That the Packers turned to Burnett and Whitehead last week suggests the two rookies are not ready to be counted on just yet.

The effectiveness of the Packers’ pass rush will be determined in part by a pregame decision on outside linebacker Nick Perry, who did not practice this week with shoulder and foot injuries. Perry is listed as questionable on the injury report.

“Nick Perry’s got a couple of different things going on,” coach Mike McCarthy said Friday. “The specifics of it are just the combination of it.”

High praise: Outside linebacker Clay Matthews was named as the Packers’ nominee for the Walter Payton Man of the Year Award. The award recognizes a player for terrific actions both on and off the field.

Finalists are announced in January, and a winner is revealed during the NFL Honors show held Super Bowl weekend in Minneapolis.

Last year’s nominee from the Packers was outside linebacker Jayrone Elliott.