Takeways from the Packers-Browns game. 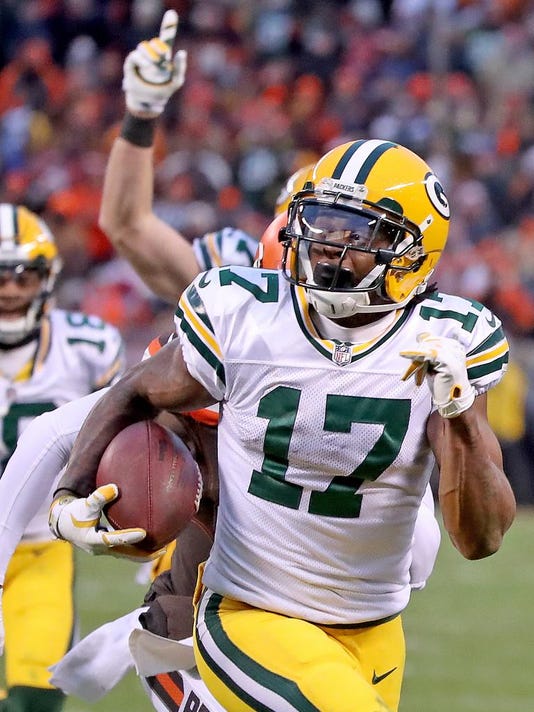 Their 14-point lead had vanished as captains from both teams arrived at midfield for the coin toss, a crucial moment to start overtime in the National Football League. The Cleveland Browns were minutes from their first victory of the season when their defense crumbled and the special teams followed at the end of regulation. They needed to win the coin toss, score a touchdown and keep the Green Bay Packers off the field.

Tails failed the Packers, and Cleveland took over at its own 25-yard line with quarterback DeShone Kizer searching for a game-winning score. Instead, Kizer panicked when outside linebacker Clay Matthews pressured off the left side. He circled back toward the middle of the field and made the inexplicable decision to launch the football high in the air toward no one in particular. The only explanation is that this was the Cleveland Browns, and this is what their quarterbacks do.

Safety Josh Jones caught the football for the easy interception, and the Packers’ offense needed a score of any kind to complete a massive comeback. A six-play drive culminated with a walk-off touchdown pass to wide receiver Davante Adams as the Packers prevailed in overtime, 27-21, for the second consecutive week.

Davante Adams says NO to the Browns winning a game.

Packers walk off in OT. #GBvsCLEpic.twitter.com/K9DlxRojim

At 7-6 their playoff dream is still alive, just like the potential return of Aaron Rodgers.

Here are five takeaways from the Packers' victory:

Desperate times: If there was any confusion about what the Packers must do to reach the playoffs, their opening possession unsheathed the desperation. Facing fourth-and-2 from his own 46-yard line, coach Mike McCarthy dialed up a fake punt that saw safety Jermaine Whitehead take a direct snap from Brett Goode. Whitehead muscled his way around the corner with a nifty stiff arm to pick up 7 yards and a first down. Four plays later, McCarthy went for it again on fourth-and-1 from the Cleveland 38-yard line. Quarterback Brett Hundley zipped a pass to wide receiver Randall Cobb, and Cobb beat his man for a first down. The Packers turned their opening drive into a touchdown for the seventh time this season when Hundley capitalized on a blown coverage and threw an easy 30-yard score to tailback Jamaal Williams.

Halted progress: One of the most telling stats from Sunday’s game was the difference in third-down conversions between the Packers and Browns in the first half. Through two quarters, the Packers had failed to convert all five of their third-down attempts. A sixth attempt had failed as well, but a penalty on the Browns’ defense kept the drive alive. A seventh attempt actually succeeded when Hundley connected with tight end Richard Rodgers for 19 yards — until center Corey Linsley was flagged for holding against a blitzing safety. The Browns, meanwhile, displayed an efficient offense under quarterback DeShone Kizer. They converted four third downs on six attempts in the first half on several different types of gains: an 8-yard scramble by Kizer, a quick slant to wide receiver Josh Gordon for 13 yards, an 18-yard gain to wide receiver Corey Coleman against zone coverage and another 18-yard gain to tailback Duke Johnson Jr. after an offside penalty against the Packers gave the Browns another chance.

Mental mistake: The Packers took their first drive of the second half and marched rhythmically to the Cleveland 10-yard line. The flow of the offense was steady, and Hundley completed passes to a number of different receivers: Jordy Nelson, Williams, Adams and Geronimo Allison. It culminated in one of the biggest plays of the season with fourth-and-1 from the 10-yard line. McCarthy opted for aggression and trusted his team to be successful in the trenches. But somewhere along the line came a miscommunication — Hundley went one way, and tailback Aaron Jones went another. It forced Hundley to spin around in the pocket and take a 2-yard loss. The ball turned over to the Browns, who marched 88 yards on nine plays for a touchdown and a 21-7 lead late in the third quarter.

Rush-hour traffic: After consecutive breakout performances by Williams, who gained at least 125 total yards against the Steelers and Buccaneers, questions throughout the week focused on how the Packers would distribute playing time between Williams and Jones, fully healthy after tearing his MCL earlier this season. As it turned out, the distribution hardly mattered against the stout Browns’ defense. The Packers managed just 3.1 yards per carry through the first three quarters and had issues at the line of scrimmage for most of the afternoon. Running lanes were jarred open as the game progressed and Cleveland protected its lead with bend-don’t-break defense. Williams finished with 15 carries for 49 yards and a touchdown, though he did chip in seven catches for 69 yards in the passing game. Jones, who played sparingly, carried four times for minus-2 yards.

.@jswaggdaddy gets his second TD of the day to make it a one-score game! #GBvsCLE#GoPackGopic.twitter.com/GiyeqCAXzs

Flipped field: The Browns jogged onto the field with a one-score lead and 5:22 remaining in the game, their first win of the season seemingly within reach. It was a moment for the Packers’ defense to stand tall and it did, forcing a punt with fewer than three minutes on the clock. Punter Britton Colquitt launched a booming kick toward return man Trevor Davis, who fielded the ball at the 10-yard line. Davis ran to his left, cut to his right and reversed back to the left to make a trio of tacklers miss. He exploded down the left sideline for a 65-yard gain that gave Hundley the ball, and a final chance, at the Cleveland 25-yard line. The Packers dinked and dunked to within a foot of the goal line, and that’s when Hundley made the biggest throw of his career: a fade to Davante Adams for a touchdown that tied the game. Overtime for the second week in a row. 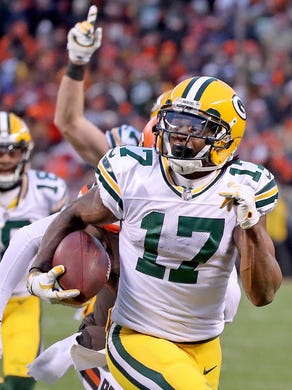 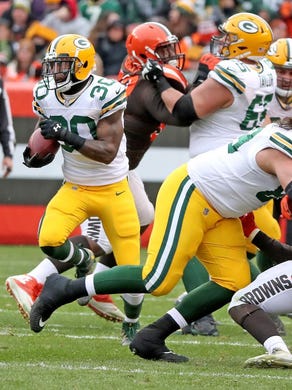 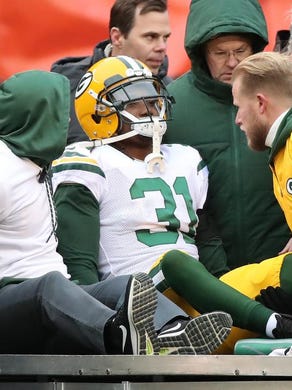 Green Bay Packers cornerback Davon House (31) is taken off the field with an injury against the Cleveland Browns on Dec. 10, 2017 at FirstEnergy Stadium in Cleveland Jim Matthews/USA TODAY NETWORK-Wisconsin
Fullscreen 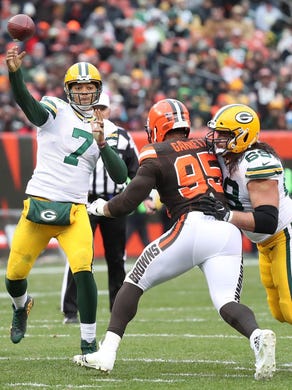 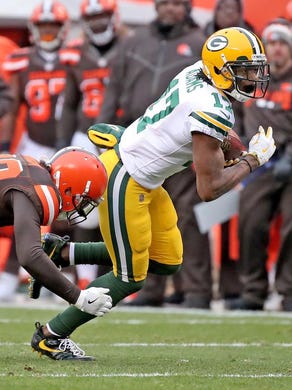 Green Bay Packers free safety Jermaine Whitehead (35) runs the ball for a first down off a fake punt against the Cleveland Browns on Dec. 10, 2017 at FirstEnergy Stadium in Cleveland. Jim Matthews/USA TODAY NETWORK-Wis
Fullscreen

Green Bay Packers safety Jermaine Whitehead (35) runs the ball for a first down off a fake punt against the Cleveland Browns on Dec. 10, 2017 at FirstEnergy Stadium in Cleveland. Jim Matthews/USA TODAY NETWORK-Wis
Fullscreen

Green Bay Packers running back Jamaal Williams (30) gets upended on a run against the Cleveland Browns on Dec. 10, 2017 at FirstEnergy Stadium in Cleveland. Jim Matthews/USA TODAY NETWORK-Wisconsin
Fullscreen

Green Bay Packers wide receiver Davante Adams (17) puts his hands to his head after a pass was knocked down against the Cleveland Browns on Dec. 10, 2017 at FirstEnergy Stadium in Cleveland. Jim Matthews/USA TODAY NETWORK-Wisconsin
Fullscreen 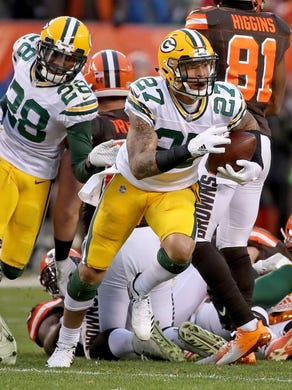 Green Bay Packers strong safety Josh Jones (27) emerges from the pile with the intercepted ball in overtime against the Cleveland Browns on Dec. 10, 2017 at FirstEnergy Stadium in Cleveland. Jim Matthews/USA TODAY NETWORK-Wis
Fullscreen 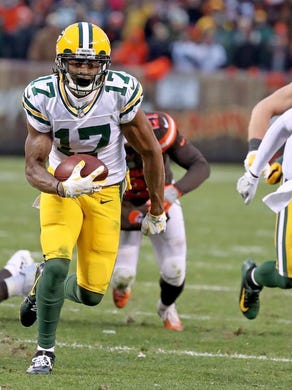 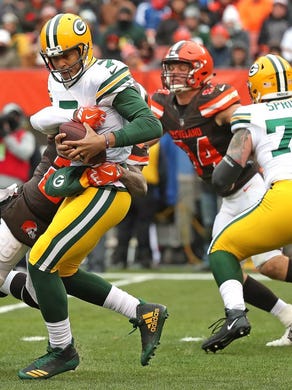 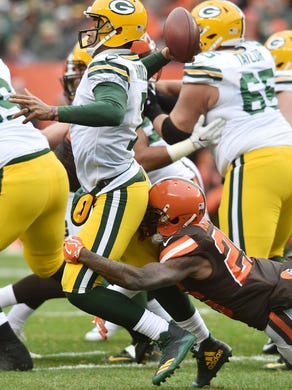 Green Bay Packers cornerback Damarious Randall (23) gets a big stiff arm from running back Duke Johnson (29) but held on for the tackle against the Cleveland Browns Sunday, December 10, 2017 at FirstEnergy Stadium in Cleveland, OH Jim Matthews/USA TODAY NETWORK-Wis
Fullscreen 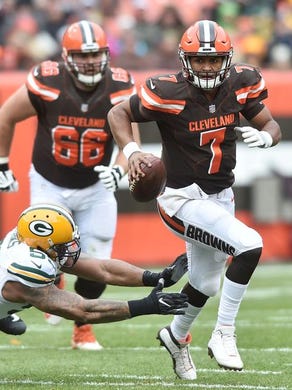 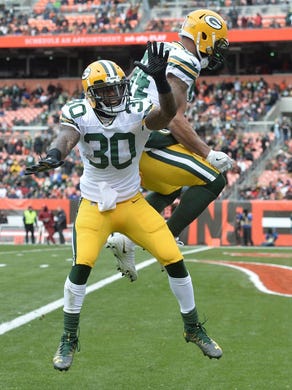 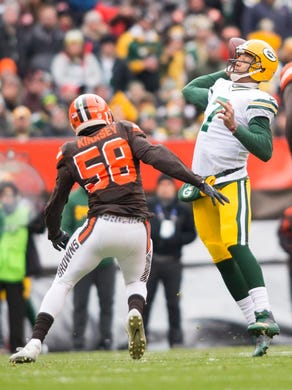 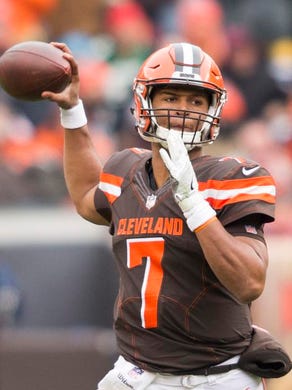 Cleveland Browns quarterback DeShone Kizer (7) throws a pass for a first down against the Green Bay Packers during the first quarter at FirstEnergy Stadium. Scott Galvin, USA TODAY Sports
Fullscreen

Cleveland Browns quarterback DeShone Kizer (7) throws a pass for a first down against the Green Bay Packers during the first quarter at FirstEnergy Stadium. Scott Galvin, USA TODAY Sports
Fullscreen 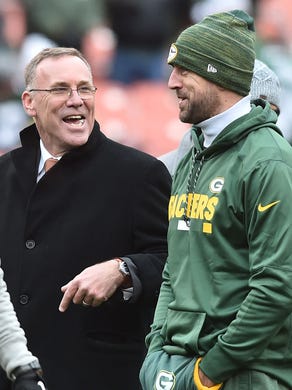 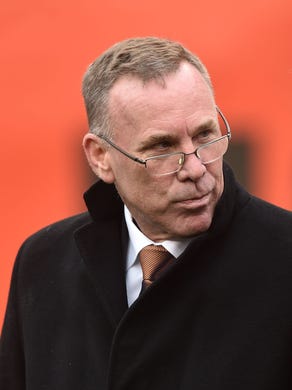