On Sunday, Green Bay's Damarious Randall and Carolina's Devin Funchess will meet again, this time as No. 1 receiver and No. 1 cornerback. 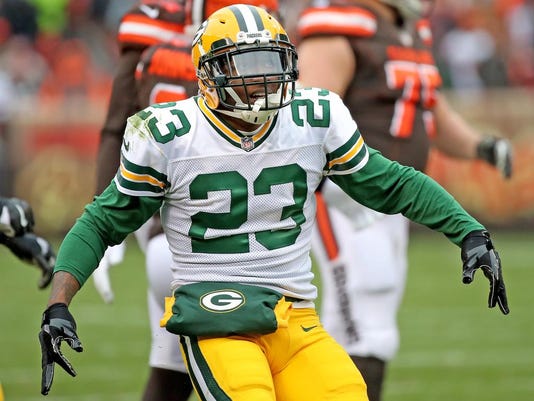 Both had an impact on the game. Funchess beat Randall for a 52-yard reception and a 14-yard touchdown. Randall broke up a key third-down pass to Funchess late in the game, stopped quarterback Cam Newton on a third-down scramble and picked off Newton to set up the offense at the Carolina 22 for a potential touchdown and tying 2-point conversion with just more than 3 minutes left.

DOUGHERTY: With Aaron Rodgers, sky's the limit for Packers

On Sunday, the two will meet again, this time as No. 1 receiver and No. 1 cornerback.

“That was two years ago,” Randall said. “I feel like we’ve both changed our game. We’re both a lot more comfortable up in the league now. Yeah, I’m just looking forward to that matchup.”

The 6-4 Funchess came into the league weighing 232 pounds, making him practically a tight end. The Panthers list him now as 225 pounds and it’s obvious to Randall that he is a different player than the one he faced in ’15.

Funchess ranks second on the team behind running back Christian McCaffrey with 57 catches for 762 yards and seven touchdowns. Benjamin was dealt to the Buffalo Bills at the trading deadline in part because they played the same position and the Panthers liked Funchess better.

Randall matched up with the 6-4, 225-pound Josh Gordon last week against Cleveland and there’s a good chance he’ll match up on Funchess. After holding Gordon to one catch in man-to-man coverage, Randall said he’ll do whatever defensive coordinator Dom Capers asks him to do.

“If I do get that, that would be nice,” Randall said. “At the end of the day, just whatever it is to help the team win games.”

When he arrived on the sideline after opening Sunday’s game with a touchdown, the Packers rookie running back started dancing in front of his coach.

“I wasn’t ready yet,” McCarthy said, joking Wednesday morning. “Just a little self-conscious out there in front of 50,000 people, I guess. No, I wasn’t going to dance. I’ve got an extra point to worry about. Got to look for flags. Got things to do.”

Williams has become a dance machine in his first season with the Packers, revealing his outgoing personality. He often dances after touchdowns, or simply between plays.

Eventually, Williams said, he believes his head coach can bring something to the party.

“He’s pretty limber already,” Williams said. “He just has to be flexible in the hips. He’s got it, he just needs practice. That’s all.

'Mo better: Wide receiver Geronimo Allison broke a five-game streak in which he had not caught a pass with a four-reception game against Cleveland.

Though he has been mostly invisible on offense, Allison has been improving on special teams and has come close to blocking two punts. Considering he was a novice on special teams when he arrived last year, he has come a long way.

“He has just come on and done such a good job,” special teams coach Ron Zook said. “I’m so proud of him because it is new. It’s like you just don’t go and be a receiver, you don’t just go and be a DB.

“There’s techniques and things you have to work at and he’s put everything into it. He knows, he asks good questions, he studies, he wants to perform well and he’s tough. I can’t say enough about him.”