The Packers were shut out for the second time this season, 16-0, as the first of two meaningless games turned into a dud.

Aaron Nagler and Pete Dougherty talk about the Vikings takeover of Lambeau Field and what they saw from some of the young players the Packers played on Saturday night.

GREEN BAY - When Brett Hundley last saw this indomitable Minnesota Vikings defense, the third-year quarterback was trotting onto the field at U.S. Bank Stadium for the first significant playing time of his career.

The Green Bay Packers had just lost Aaron Rodgers to a broken collarbone, rammed to the turf by linebacker Anthony Barr, and the next seven-plus games would belong to Hundley.

His first pass in that Oct. 15 game was intercepted, and two more suffered the same fate, as Hundley stumbled through a difficult debut. His coach, Mike McCarthy, said Hundley would be much better prepared this time around for a second chance against the Vikings, champions of the NFC North.

INSIDER: Thumbs up to struggling defense

More than two months later, the improvements were hard to find. Hundley sputtered through a forgettable performance by completing 42.5 percent of his passes and throwing more interceptions (two) than touchdowns (zero). His passer rating of 30.2 was borderline embarrassing. The Packers were shut out for the second time this season, 16-0, as the first of two meaningless games turned into a dud.

Kai Forbath kicked a 49-yard field goal on the Vikings’ first possession that would have been enough to win, but the visitors tacked on a touchdown pass from Case Keenum to Stefon Diggs and another two field goals for good measure.

With the playoffs out of reach, general manager Ted Thompson made the decision to place Rodgers on injured reserve for the second time. The move invited questions about what type of game plan McCarthy and his staff would devise, about whether they would stick to a prototypical formula or throw caution to the wind for the sake of player development.

As production goes, the Packers’ offense rediscovered its impotency from Hundley’s seven games as the starter. He relied on short, quick passes that neutralized the pass rush and did nothing to move the chains. He continued to lack chemistry with wide receiver Jordy Nelson, who dropped out in the second quarter with a shoulder injury. And he still made poor decisions that cost the Packers points, evidenced by an interception at the Minnesota 5-yard line.

The Packers had 11 legitimate possessions and six ended in punts. The others featured two interceptions and three turnovers on downs.

The coaching staff did, however, begin to rotate personnel at the wide receiver position. While Nelson, Randall Cobb and Geronimo Allison assumed leading roles, there were bursts of snaps for Trevor Davis, Jeff Janis and even Michael Clark, the training camp sensation and former Division I basketball player had three catches for 36 yards.

Hundley and the offense were handicapped from the start. Wide receiver Davante Adams (concussion) was inactive just six days after the rattling hit he absorbed in Carolina last week. Up front, the Packers were without right guard Jahri Evans (knee) from the start and right tackle Jason Spriggs (knee) after the very first snap. Spriggs was carted off the field and did not return.

The defense was undermanned as well, and the Packers played without their top two pass rushers in Clay Matthews (hamstring) and Nick Perry (ankle/shoulder), plus their No. 1 cornerback Damarious Randall (knee). It opened the door for the likes of Vince Biegel and Reggie Gilbert to take reps at outside linebacker, Josh Hawkins and Lenzy Pipkins at cornerback.

Hawkins endured a rough evening. Matched frequently with Diggs, the Vikings’ most dynamic perimeter player, Hawkins committed a pair of pass interference penalties and got beat on a 4-yard touchdown in the back of the end zone. The lofted throw from Keenum to Diggs gave the Vikings a 10-0 lead late in the first quarter.

Green Bay Packers inside linebacker Blake Martinez (50) looks at the video board as the Packers are called for 12 men on the field against the Minnesota Vikings at Lambeau Field on Saturday, December 23, 2017 in Green Bay, Wis. Adam Wesley/USA TODAY NETWORK-Wisconsin
Fullscreen 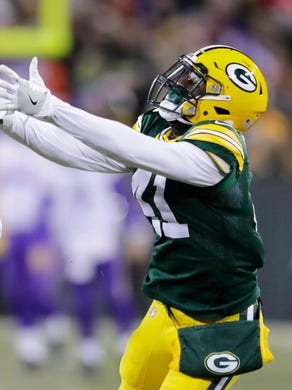 Minnesota Vikings quarterback Case Keenum (7) looks up at the video board after being hit after a throw at Lambeau Field on Saturday, December 23, 2017 in Green Bay, Wis. Adam Wesley/USA TODAY NETWORK-Wisconsin
Fullscreen 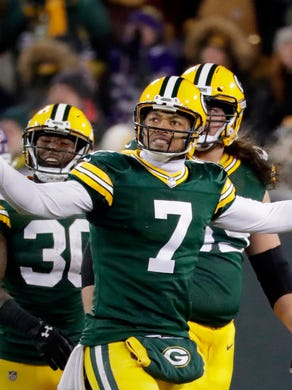 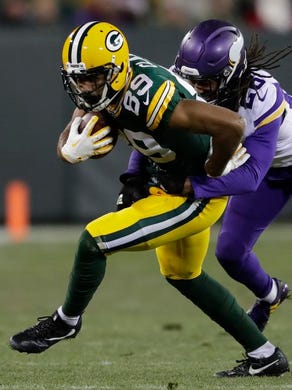 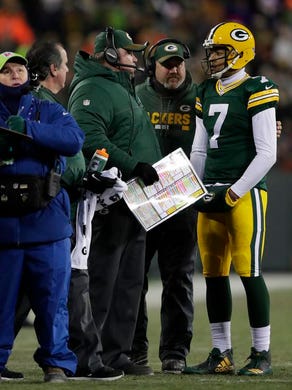 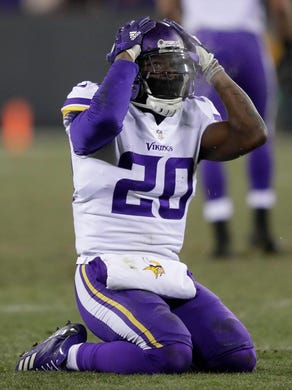 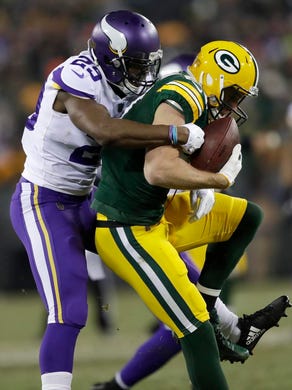 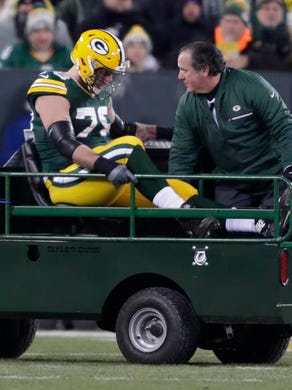