Any indecision for Packers coach Mike McCarthy about earmarking snaps for younger wide receivers has been lessened by the injury report.

A brief overview of three storylines that could help determine the outcome of Sunday's game between the Green Bay Packers and the Detroit Lions. 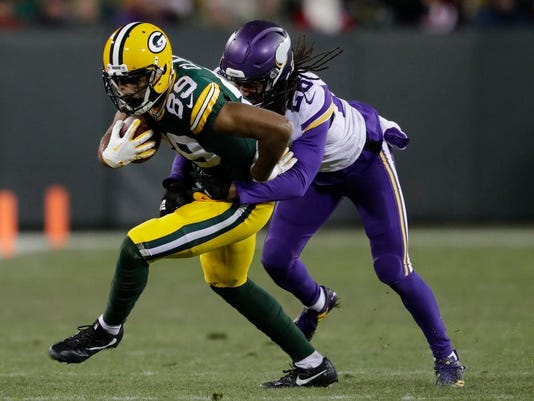 GREEN BAY - When it comes to the wide receiver position, any indecision for Green Bay Packers coach Mike McCarthy about whether to earmark snaps for younger players in the regular-season finale likely has been soothed by the injury report.

Starters Jordy Nelson (shoulder) and Davante Adams (concussion) are on the fringes of availability for Sunday’s game against the Detroit Lions, according to McCarthy, and neither player was on the practice field to start the week.

Adams remains in the concussion protocol more than a week after absorbing a vicious blindside hit in Carolina that triggered a suspension for the culprit, linebacker Thomas Davis. McCarthy said Adams had not been cleared as of Wednesday morning, which meant he was unable to practice and was also barred from speaking to the media.

Nelson did not practice either after dropping out of Saturday’s loss to the Minnesota Vikings with a shoulder injury. Instead, the veteran receiver was part of a large rehab group for the wounded Packers, who took the field Wednesday without four bona-fide starters and two more key contributors.

“It’ll be tough for him to make this week,” McCarthy said of Nelson’s availability for the trip to Detroit.

The prospect of entering Sunday’s game without his top two receivers affords McCarthy a guiltless opportunity to evaluate the youth behind Nelson and Adams. A week ago, the trio of Michael Clark, Trevor Davis and Jeff Janis combined for 56 snaps in what amounted to relief duty against the Vikings. That number could approach 100 if the Packers open the playbook with four- and five-receiver sets flocking quarterback Brett Hundley, who will make his ninth start of the season and second against the Lions.

RELATED: Nothing on the line Sunday in Detroit

“A lot of guys are getting an opportunity this week,” Hundley said. “They showed a lot of upside last week, especially Mike (Clark) out there for his first time. And this week getting out there, (with) Trev and Jeff and all those guys getting to run around a little bit, we’ll be able to sling it around, and I trust those guys to get the job done.”

Clark could be the biggest beneficiary of the injuries to Nelson and Adams. A former Division I basketball player, Clark spent the majority of the year on the practice squad before general manager Ted Thompson added him to the active roster in December. He made his regular-season debut against the Vikings with three catches for 36 yards in 28 snaps.

That Clark saw the field at all in his rookie season is a testament to the raw potential Thompson hoped to tap. Clark played a single year of college football at Marshall before entering the draft early and, ultimately, signing with the Packers as an undrafted free agent. His knowledge of the game was tenuous at best, evident even to the untrained eyes of spectators at training camp. But his catalog of jaw-dropping catches hinted at a mountainous upside receivers coach Luke Getsy would be responsible for unearthing.

“When you hear the same stuff over and over and over again, you get accustomed to it. That’s how I caught on — hearing the same thing over and over. It’s pretty easy for me now. I feel a lot more comfortable. The first day of camp, nothing stuck at all. I’m pretty in tune with the offense now. Still getting better, but obviously they trust me enough to play.”

Clark’s insertion on offense has shrouded a fizzled ending for Nelson, whose 2017 season will be viewed as underwhelming regardless of his availability for the finale. Nelson’s involvement in the offense nosedived with the collarbone injury to starting quarterback Aaron Rodgers. He became, at best, a third or fourth option for Hundley, who found better rhythm with Adams, Cobb and even tailback Jamaal Williams, whose 224 receiving yards since Nov. 6 are 45 more than Nelson managed in the same period.

“I couldn’t put a finger on it, you know?” Hundley said of his non-connection with Nelson. “I just throw to the matchups and to the play calls.”

If Nelson is unable to play against Detroit, his 53 catches for 482 yards and six touchdowns will be his worst output since 2010. And while Nelson said he doesn’t base the success or failure of a particular season on statistics, the months of ineffectiveness are impossible to ignore.

“I understand what numbers say,” McCarthy said, “but it’s about opportunities and being in rhythm. So I mean, if you look at some of the production even with the younger players in the Minnesota game, I don’t think it’s no surprise you see Brett, he throws to Trevor more, he throws to Michael Clark more, just because that’s who he’s been practicing with.

“But Jordy, he’s going through a tough week with the shoulder. But like he always does, he shows up every day and he’ll do everything he can to get out there Sunday.”