Silverstein: Plenty of replacements for Capers

Packers coach Mike may never have as many outstanding defensive coordinator options the rest of his career as he will in the coming week or so.

Silverstein: Plenty of replacements for Capers

The guys give their predictions for Sunday's season-ending showdown between the Green Bay Packers and the Detroit Lions. 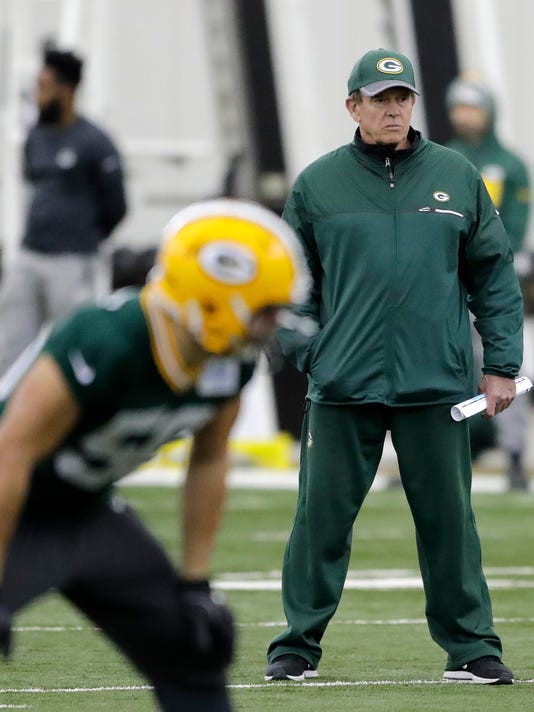 GREEN BAY – Some things pertaining to the failure of the 2017 Green Bay Packers defense were out of coach Mike McCarthy’s control.

But the day after the Packers conclude their season with a division contest against Detroit at Ford Field, McCarthy is back in charge. What he does in January, and what expectations he sets for his players after they complete exit interviews Tuesday, are completely in his control.

Believe it or not, the Packers have the makings of a solid defense, but a couple of things have to happen.

First, McCarthy must – and most likely will – part ways with defensive coordinator Dom Capers.  ESPN, citing league sources, reported late Saturday night that Capers "is not expected to return next season."

It’s possible Capers will step down or retire so both sides can part amicably and avoid the indignity of a flat-out firing.

Capers deserves that much for all the time and effort he has put into his job, all while having to endure the fickle disdain of Packers fans, some of whom over the years have called for McCarthy, offensive line coach James Campen and anyone who coaches special teams to be fired immediately.

These are the same people who want Kevin Greene to be defensive coordinator even though he only knows how to coach one position.

D'AMATO: The Packers' offense has plenty of holes, too

SILVERSTEIN: Packers must move on from Don Capers

Regardless of how McCarthy handles business with Capers, his next order of business is moving fast to replace him. He needs to hire someone from outside the organization to give the defense a fresh start.

He may never have as many outstanding options the rest of his career as he will in the coming week or so.

He should move fast because these available defensive coordinator candidates are going to have options elsewhere if head-coaching turnover is as great as all indications are it will be. If he moves quickly, he could find someone who could turn his defense around in short order.

So, who might be available? Here are a few names:

» Vic Fangio, Chicago Bears defensive coordinator: Regardless of what happens to the team's head coach, Fangio will be available. His contract ends this year and he's going to be pursued heavily. He coached those great defenses under Jim Harbaugh in San Francisco and turned the Bears group into a stingy unit despite holes everywhere. He’s a 3-4 guy who doesn’t blitz as much as Capers, but his track record is excellent. It's probably going to cost a lot of money to beat out other teams.

» Gregg Williams, Cleveland Browns defensive coordinator: If Hue Jackson is fired or leaves for Cincinnati, Williams might be available. McCarthy reportedly offered Williams the job before he hired Capers, but Williams wanted to stay in the South near his family and joined Sean Payton in New Orleans. Williams still has the stigma of Bountygate attached to his name and he is a high-risk strategist. But he did a nice job in Cleveland and knows his stuff.

» Steve Spagnuolo, New York Giants defensive coordinator: It’s likely Spagnuolo won’t be hired as head coach and will be let go. He developed his blitz-heavy system under Philadelphia Eagles legend Jim Johnson and won a Super Bowl with the Giants under Tom Coughlin. However, his defenses have been mostly poor ever since, finishing 32nd in 2015 and ranking 32nd heading into this weekend.

» Teryl Austin, Detroit Lions defensive coordinator: It’s likely that Jim Caldwell will get fired, but the big question is whether Austin will replace him or take over as head coach somewhere else. He has had nine head-coaching interviews the last three seasons and with so many openings, it might be his time. The Lions ranked 25th in defense, but they created a lot of turnovers. He worked under Chuck Pagano and Dean Pees in Baltimore and knows 3-4 schemes.

» Paul Guenther, Cincinnati Bengals defensive coordinator: If McCarthy wants to counter what the Vikings are doing, he might want to go after Guenther. It’s possible the Bengals will hire him as a head coach or keep him as defensive coordinator, but if not, he’s a definite candidate. He learned at the feet of Vikings coach Mike Zimmer and his defenses are tough.

» Chuck Pagano, Indianapolis Colts head coach: It’s practically a certainty the Colts will fire Pagano, who before taking over at Indianapolis was defensive coordinator for the Baltimore Ravens in 2011, a year in which they finished third in fewest yards and points allowed. Pagano worked under Rex Ryan and Vic Fangio in Baltimore and knows 3-4 defenses. However, he has two years left on his contract and might just collect his salary.

» Vance Joseph, Denver Broncos head coach: There has been speculation Joseph will be fired. If he is, he might get some head-coaching interviews, which would delay his decision whether to return as a defensive coordinator somewhere. He was defensive coordinator in Miami in 2016 (29th in yards, 18th in scoring), and worked under Wade Phillips in Houston and Guenther in Cincinnati. He runs a 3-4.

» James Bettcher, Arizona Cardinals defensive coordinator: If head coach Bruce Arians decides to step down as has been rumored, Bettcher probably would be available. He learned under New York Jets head coach Todd Bowles in Arizona and Washington defensive coordinator Greg Manusky in Indianapolis. Bettcher likes players who can play multiple positions and has shaped his scheme to fit the talent. After struggling earlier in the season, the Cardinals' defense ranks sixth in yards and 17th in points.

» John Fox, Bears head coach: He has one more year left on his deal and may just sit out a season and get back into it in 2019 should he get fired. He has been a head coach for 16 straight seasons, so there’s little reason to think he’d step back to being a defensive coordinator. But if he wants to get back at the Bears and not have to take on all the stress of being a head coach, Green Bay might be the place for him. He and McCarthy get along well.

» Marvin Lewis, Bengals head coach: Lewis’ 15-year run is about to end. At age 59, he probably never will go back to being an assistant. But he and McCarthy talk often and have great mutual respect. Lewis reportedly wants his next job to be in the front office, so it would take a lot of convincing – and money – to lure him to Green Bay.

Whomever McCarthy chooses to run his defense next season, he must convince some of his defensive players from the 2017 draft to have the kind of offseason Kenny Clark, Blake Martinez and Kyler Fackrell had. All three set out to improve their bodies and minds for their sophomore seasons.

McCarthy needs cornerback Kevin King, safety Josh Jones, defensive tackle Montravius Adams and linebacker Vince Biegel to do the same thing. King and Biegel need to get stronger, Jones needs to learn the defense like the back of his hand and Adams needs to hang on Clark’s hip and do everything he did to make himself one of the most valuable players on defense.

With a decent draft and some free-agent help, McCarthy might not be that far away from having a capable defense. He just needs to find the right guy to run it.