Aaron Nagler answered fan questions in a Facebook Live chat Sunday after Packersnews.com confirmed that Brian Gutekunst will be the Packers' next general manager. 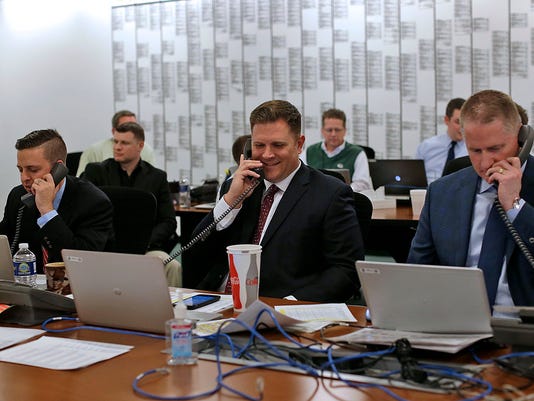 Green Bay Packers President/CEO Mark Murphy has made his decision in regard to who will take over for Ted Thompson as general manager of one of the NFL’s most historic franchises. With several in-house candidates to choose from, Murphy made Brian Gutekunst his GM.

Obviously, the best place to start is our initial look at the news, from Ryan Wood and Tom Silverstein:

As news spread through social media, plenty of people chimed in with their thoughts on the hire. Silverstein looked at what led Gutekunst to this point:

Gutekunst, 44, was hired by Ron Wolf as a scouting intern in 1997. Left for one year and returned as a college scout. Has been with the #Packers ever since. He is steeped in the Wolf way of running football operations. Not unlike Schneider, Dorsey, McKenzie.

One person likely to be pleased with Brian Gutekunst as #Packers general manager is Mike McCarthy. One source said Gutekunst and McCarthy have a strong relationship, believed Gutekunst was McCarthy’s preference when the coach spoke of fit.

Former Packers safety LeRoy Butler seems to like the move:

BRIAN Gutekunst is your new @packers GM,HE WILL DO A GREAT JOB!, a real Personel guy, the Roster will still be one of the youngest but very athletic

New Packers GM Brian Gutekunst is as respected as it gets in NFL scouting circles. Also blew the Niners away in his GM interview there last year.

It sounds like the Packers will try to convince Eliot Wolf to stick around:

According to a source, Murphy and Gutekunst want Eliot Wolf to stay and will try to convince him not to leave for another job. They will have their hands full convincing him after that decision.

Really like the hire of Packers new GM Gutekunst.
He's a scout, learned from Wolf and McCarthy respects him. +Philbin as OC... good weekend.

Doug Russell is also on board:

280 character analysis: Gutekunst is a very good hire. Deep personnel background, provides continuity AND fresh ideas. While we don't know exactly how his style will be, he was in the same scouting room as Schneider, Dorsey, McKenzie, et al. Ron Wolf original hire. #Packers

Before hiring Brian Gutekunst as GM, the Packers also interviewed Eliot Wolf, Russ Ball and Doug Whaley. There may have been others, but those are the known interviews for sure.

While he did not get the GM job, it sounds like Russ Ball could get a promotion:

Packers VP of football administration Russ Ball was mentioned as a strong contender for Packers GM. Possible he will got a new title soon, source says, but Brian Gutekunst has roster control.

The Internet’s got jokes:

I hope that one of the staples of the Gutenkust era is the franchise tag. Just so we can call it the Guten-tag.