If the Green Bay Packers are looking for wide receiver Jordy Nelson to take a pay cut this season, they did a good job of hiding it Wednesday. 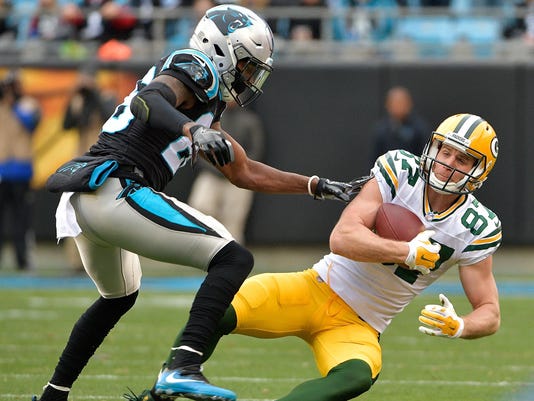 INDIANAPOLIS – If the Green Bay Packers are looking for wide receiver Jordy Nelson to take a pay cut this season, they did a good job of hiding it Wednesday at the NFL scouting combine.

Both general manager Brian Gutekunst and coach Mike McCarthy didn’t hesitate to defend Nelson despite his lowest production in yards (482) and touchdowns (six) since he became a featured receiver in 2011.

Nelson, 32, comes into this season with a $12.5 million salary-cap number, third highest on the team behind quarterback Aaron Rodgers ($20.6 million) and receiver Randall Cobb ($12.7 million). Given his age and drop in production, he is a logical candidate to take a pay cut or be released.

But the Packers don’t see it that way -- at least not publicly. They may be choosing to keep their in-house evaluations to themselves, but in comments to reporters they didn't downgrade Nelson's performance.

“He’s been a great player here,” Gutekunst said. “He’s still a very strong contributor for us. You saw early in the year the impact he had in those games. Yeah, he’s still a really good player in my eyes.”

RELATED: Mike McCarthy to Packers' defense: 'You're not the stepchild'

McCarthy said some of Nelson’s production slip had to do with circumstances surrounding the offense. He didn’t need to say one of those was not playing with Rodgers for most of the season.

Backup Brett Hundley never figured out how to get Nelson the ball and for the last six games or so it wasn’t always clear whether it was because Nelson had lost a step or Hundley wasn’t good enough.

It was significant that while Rodgers still was healthy, opposing teams started focusing on Davante Adams as the Packers’ No. 1 receiving threat, an honor that for a long time belonged to Nelson. When Rodgers was healthy, Nelson had only two receptions of 30 or more yards.

McCarthy said a lot of work has gone into evaluating the offense and Nelson and Cobb were a part of that.

Like Gutekunst, he’s not ready to write off either of the two based on last season.

"It’s like anything, you’re trying to establish a formula to write a story or make an analysis, we’re doing the same,” McCarthy said. “There’s more variables involved than that. You look at the way we played in the last 11 compared to the first five, it’s a little different responsibility for all of our receivers.

Despite their defense of the two receivers, it doesn’t mean the Packers won’t change their minds and ask for a pay cut or release one of them. The Packers aren’t tight against the salary cap now, but after they extend Rodgers they’may need space if they’re going to sign free agents.

As of right now, they are sticking with Nelson and Cobb even if, along with Adams, they have three receivers with cap numbers of $10 million or more.

“To me, you have to look at the team as a whole, and obviously you’re going to have strengths and you’re going to have weaknesses,” Gutekunst said. “It’s probably a little unusual, but if you look across the league there are teams that are heavy in different positions.

Aaron Nagler and Ryan Wood give their takes on Packers GM Brian Gutekunst confirming they would like to get an Aaron Rodgers extension done this offseason and just how aggressive they'll be in free agency. (Feb. 28, 2018)