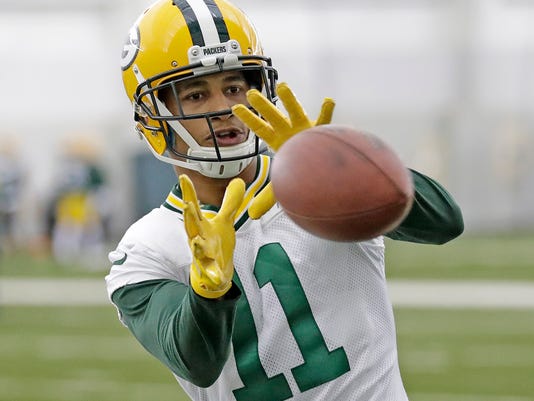 Davis, 24, was taken into custody while he and a female companion were checking into a flight at the Hawaiian Airlines ticket counter.

According to USA TODAY Sports, an attendant asked Davis normal security questions about his luggage and Davis allegedly joked about having a bomb in his bag. Davis turned to his companion and said something along the lines of, “Yeah, did you pack the explosives?”

RELATED: How different will the Packers' offense be?

She said no and attempted to keep Davis from going on, USA TODAY Sports reported. He replied that he was just kidding, but police were called and Davis was arrested.

He was booked, released on $15,000 bail and given a May 3 court date, according to USA TODAY Sports.

"The Packers are aware of the matter involving Trevor Davis," the team said in a statement. "We are in the process of gathering more information and we will refrain from making any further comment as it is an ongoing legal matter."

Davis, a fifth-round draft choice in 2016 out of California, finished third in the NFL in punt returns last season with a 12.0 average and eighth in kickoff returns with a 22.8 average.

His most notable play was a winding, 65-yard punt return late in the fourth quarter at Cleveland that set up the tying touchdown in a game the Packers won in overtime.

Davis also served as a gunner on punt coverage, a role that figures to take on more significance next season with the departure of free agent Jeff Janis to the Browns.

Davis saw limited action as a receiver, playing only 103 snaps from scrimmage (more than half of which came in the final two games, after the Packers had been eliminated from postseason contention). He finished with five receptions for 70 yards.

The Packers have starting center Corey Linsley under contract through 2020, but they are in need of backup help there. In addition, they have an opening at right guard where veteran Jahri Evans’ return appears questionable and youngsters Kyle Murphy and Justin McCray still must prove they’re worthy of being starters.

Fallah was considered a leader on USC’s offensive line. In addition to snapping to possible No. 1 pick Sam Darnold, Fallah snapped in high school to UCLA’s Josh Rosen, another highly regarded quarterback prospect.