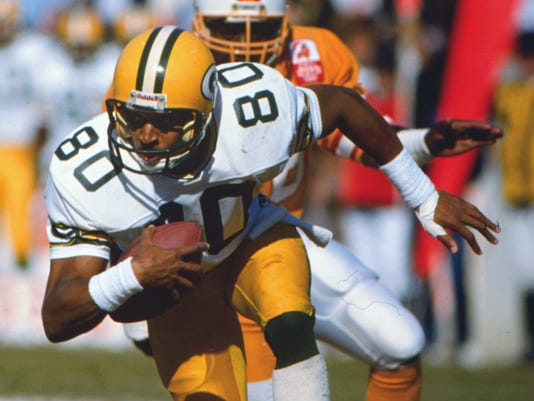 James Lofton ended his nine seasons with the Packers with 530 catches for 9,656 receiving yards, which were franchise records at the time.(Photo: File photo)

Editor's note: This story appeared in the Milwaukee Sentinel on May 3, 1978.

The Green Bay Packers lost a fourth-round choice Tuesday and got one back in the fifth round by trading away defensive tackle Dave Pureifory. And those were just a couple of the surprises they sprang on a topsy turvy day of the NFL draft.

The Packers started upsetting the form chart immediately after making Stanford wide receiver James Lofton their first choice. Lofton, the most valuable player in this year's Senior Bowl as well as a world-class long jumper, became the big play threat the Packers were expected to claim with their first selection.

But he was also the last offensive player Green Bay took in the early rounds, as the Packers concentrated on defense in general and linebackers in particular.

John Anderson, the Michigan linebacker and former Waukesha High School star, was the Packers' second pick in the first round, and Minnesota linebacker Mike Hunt was chosen in the second round. Next came Illinois State cornerback Estus Hood in the third, and then another linebacker in the fifth round, Mike Douglass of San Diego State. Arkansas guard Leotis Harris was taken in the sixth round as the first day of drafting wound down. 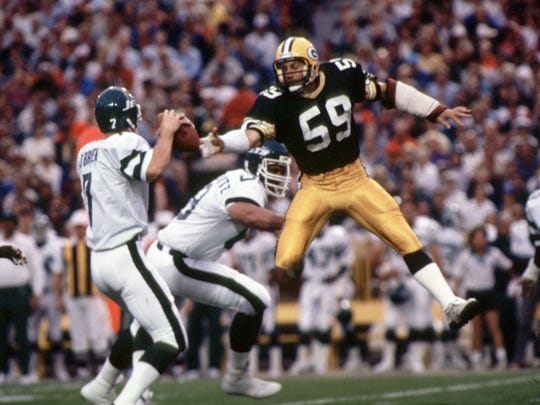 There was no fourth round choice for Green Bay, and that was something of a shocker.

Packer coach and General Manager Bart Starr disclosed that the NFL had taken away that pick because Green Bay had worked out a number of prospects on campuses other than their own last February. The league has a rule against that.

Starr said the club took a look at a few athletes on the Memphis State and Arizona State campuses, using their indoor facilities because of bad weather. "We were just unaware of the rule. We were guilty, and the penalty was handed down over the weekend. I'm very upset about it, and that's about all I want to say. Naturally it upset our plans some. There were some good people available on that pick."

Perhaps one of them was Willie Wilder, a running back from Florida, because he's the man the Packers took after sending Pureifory to Pittsburgh for the Steelers' fifth-round draft choice.

Pureifory is a six-year veteran and a starter for the Packers, who might have been expected to bring more than a fifth-round pick. But Starr explained, "At the time, we were interested in a particular back with fine speed. We had the need, and they had the draft choice."

Wilder stands 6-1, weighs 220 pounds, and there's no question he has fine speed. He runs the 100 in 9.5 seconds, and he was Florida's leading rusher last season.

The Packers were expected to get into the running back market well before that. In fact, they were expected to do a lot more shopping for all kinds of offense, since theirs ranked near the bottom of most league categories last year.

Bart Starr indicated the Packers never intended anything of the kind.

When asked why he spent two of his first three picks on linebackers, he said, "We had been thinking along those lines all along. The draft has gone pretty much the way we expected it would for us. We're very pleased with the people we have."

Linebacking is an obvious area of concern for Green Bay because veterans Fred Carr and Jim Carter will be in their 30s this season. Gary Weaver is coming back from a serious knee injury last year.

"I don't think you have to expand on it any more than that," said Starr.

The Packers do have some other important needs, however - particularly in the offensive line and at running back. "We would have liked to do more in the offensive backfield, but we just didn't have enough choices," said Starr. "And we had an area of grave concern at linebacker."

As for the offensive line, he said, "We have a small nucleus going for us there. We need a bigger one, but some of the people we would have liked were disappearing."

There was no question that Lofton would have disappeared rather quickly if the Packers hadn't made him the sixth person taken in the draft. A 6 foot 3, 194 pounder with exceptional speed, he caught 53 passes fo 931 yards and 12 touchdowns last year at Stanford.

He set school records for touchdown receptions and single-game yardage with 192 against Washington. He also caught three game-winning touchdowns.

Said Stanford coach Bill Walsh, "James will be one of the major factors in the NFL next year. I predict a great rookie year for him. He'll be outstanding almost immediately." 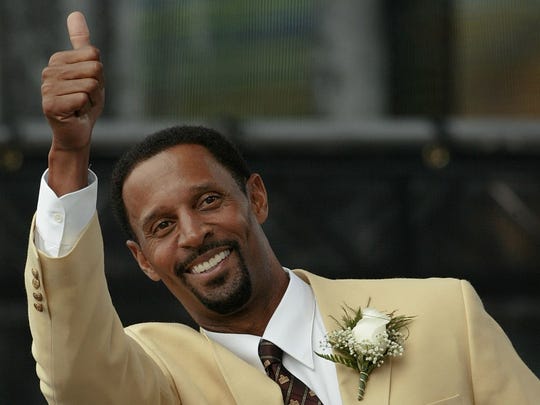 James Lofton gives a thumbs up to the section of cheering Green Bay Packers fans at his enshrinement to the Pro Football Hall of Fame in Canton, Ohio, in 2003. Lofton began his NFL career with the Packers as a first-round pick in 1978. (Photo: Journal Sentinel files)

Success came in a big hurry this year for Lofton, who wasn't even a starter his junior year.

"I didn't start to think I would go this high until after the Senior Bowl," said Lofton in a telephone interview from Stanford. "Last year at this time, they cut the draft from 17 to 12 rounds, and I was worried about being drafted at all.

"I'm really kind of happy about the Packers taking me. I thought it would be either Buffalo or Green Bay, and my initial preference was Green Bay. I thought I would like the lifestyle there a little better."

Lofton says he isn't familiar with the personnel at Green Bay, so he's not prepared to predict what his role will be with the Packers this year. "I would just like to play well," he said. "I'd like to be thought of as a good player, and I think I'll be able to do that.

"I have confidence in my ability. It's just a matter of the club learning what I can do best."

Starr acknowledged that intelligence was a big factor in the Packers' taking Lofton, who will graduate this June with a degree in industrial engineering. It also counted in the selection of the 6-3, 220-pound Anderson, who was the second team Academic All-American this year at Michigan.

Anderson was an all-Big Ten choice and first-team All-American selection by the Football Writers of America as well. The Wolverines' regular punter for four years, he had a 40.5-yard average as a senior.

Starr said, however, that his punting was not a major consideration in Anderson's selection.

While Anderson is considered strictly an outside linebacker candidate, the 6-2, 240-pound Hunt will be used in the middle. A three-year starter at Minnesota, he had 37 solo tackles and 38 assists last year. He played in the post-season Challenge and Senior Bowls.

Hunt said he was a little surprised to be taken by the Packers, but then he added, "Anybody would have surprised me. You never have a real good idea of what's going to happen unless you're the Heisman Trophy winner or something.

"But I'm really happy they took me. I went there for a physical about three weeks ago and had a great time. It's a pretty town and I guess I won't feel out of place with the weather. I've been living in this stuff all my life. I don't know if I could hack if it didn't snow once in a while."

Hunt said he knows Anderson pretty well, and he wasn't worried because the Packers drafted another linebacker ahead of him. "I'm just going to try to fit in any way I can. Of course I want to play as soon as possible," he said.

How soon will that be? Both Starr and linebacker coach John Meyer said it would depend on the newcomers themselves as well as the linebackers already on the premises.

"We had hoped to take one linebacker late in the first round and then another one in the second or third," said Meyer. "We figured now is the time to take them. It's happened so much in the past that you wait a round and the guy you want is gone.

"It's been a while since we've had much competition at linebacker here, and I think both of those guys are good enough athletes to put a whole lot of pressure on the incumbents. With Don Hansen backing up Jim Carter in the middle, the average age at that position is about 30 years old.

"Weaver's injury is coming a little slower than expected, but we hope it will be ready. Still if he had to play today, I don't think he could."

Meyer said he thought both Anderson and Hunt were capable of playing right away, and he wouldn't rule out one or both starting this year.