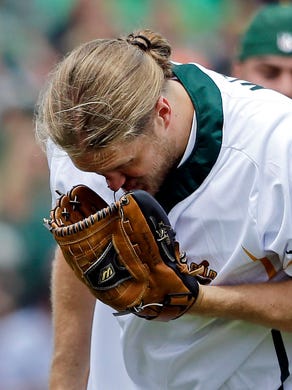 Matthews suffered a broken nose Saturday when offensive lineman Lucas Patrick smacked a liner up the middle, hitting his teammate in the face. McCarthy said the plan is for Matthews to have surgery by the middle of this week. It isn’t expected to affect Matthews' long term.

What could have been a serious injury developed into a more lighthearted situation 48 hours later.

“I think he needs to work on his off-hand, mitt side, on the release of the ball,” McCarthy quipped Monday. “That’s what the tape showed me.”

After being knocked to the ground, Matthews covered his face with his glove and immediately walked off the field at Fox Cities Stadium in Grand Chute. He was later taken to a local hospital. Receiver Davante Adams, Matthews’ co-captain, began pitching from behind a batting practice screen after the unfortunate play.

The Packers first held their charity softball game in 1994 at Appleton’s Goodland Field. Back then, it was backed by former Packers defensive back George Teague and singer Michael Bolton. The event moved to Fox Cities Stadium in 1995, and Brett Favre became its headliner in 2000. Receiver Donald Driver assumed Favre’s role after the quarterback was traded to the New York Jets in 2008, and receiver Jordy Nelson replaced Driver after his retirement.

After Nelson’s release this offseason, Matthews and Adams became co-captains.

Proceeds from the event went toward Nelson’s charity Young Life, which pairs middle, high school and college students with young adults for guidance. In 2017, the game raised $130,000.

McCarthy said he won’t pull out of the game because of Matthews’ fluke accident.

“I think it's great on a number of fronts,” McCarthy said. “Anytime your players give back (to) charity, involved in the community, it's a great day for the fans. I mean, they sell out every year. It's on its fourth player identity with the softball game. So, yeah, I'm not going to overreact to this.”

McCarthy added: “It's unfortunate but it's for a great cause. I'm just glad he's OK."

Patrick said he has talked frequently with Matthews since the incident, including Monday. The backup guard was clearly shaken by the unfortunate incident, saying he felt terrible. He wishes the batting practice net had been inserted sooner.

“It’s one of those fluke things,” Patrick said. “Looking back, after they put the net out, it just took one guy like me to hit the face of the franchise to realize we need a net.”

There was no ill will between Matthews and Patrick after the incident, Patrick said. Instead, he credited Matthews for helping him feel better.

“I went up, and he was as calm and cool as could be,” Patrick said. “He’s a tough guy to hop up like he did. He helped settle my nerves. I felt terrible, of course.

“He’s a nice guy, and praying for him. Hope everything heals up. He was as good a guy as you could be during that.”