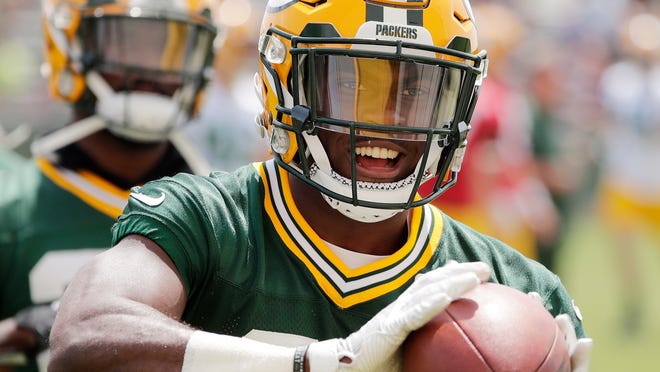 So Pankey has returned to the field this spring as a more confident player, a more polished player and a more versatile player, a utility lineman capable of playing guard or tackle on either side of the line in a pinch. He took thousands of reps in practice last season — even though only hardcore Packers fans knew he was on the roster — and is hopeful of parlaying that redshirt season into a spot on the team next fall.

Campen has rotated Pankey through left guard, left tackle, right guard and right tackle during organized team activities and minicamp. The majority of his reps have come at tackle, even though he feels more comfortable at guard.

“I think I’ve even worked more on flipping sides a little bit,” Pankey said. “I got a lot of reps at right tackle here early on (during OTAs), now finishing up at left a little bit, getting my feet back right over there. I think I made some strides on the right side throughout the season. Just playbook-wise I’m a lot more comfortable, cadence-wise, understanding all the quarterbacks’ different cadences and rhythmic stuff. I feel confident after these OTAs for sure.

“Which (position) would I pick? I would tell them both. I’ve spent so much time — I feel more natural at guard, so it’s a little bit easier with the sets, they’re shorter sets. So it’s not as big of a transition as flipping right tackle to left tackle. As far as comfortability, I’ve been working tackle, so I’m pretty much feeling about equal everywhere.”

The Packers released their schedule for training camp:

Albert Breer writes on the same subject for the MMQB:

Field Yates looked at one looming roster decision for each team:

Here’s Field on the Packers:

Rodgers' redone deal. While Aaron Rodgers has two years left on his contract, the Packers have already made it clear that an extension is a priority. He's due a total of $39.9 million in base salary over the final two seasons, but the quarterback market has ballooned of late, and Rodgers will recalibrate the market when a new deal is done. There's an easy case to be made that the $30 million per season that Matt Ryan recently got in a contract extension should be the floor for Rodgers, who is one of the two best quarterbacks on earth.

Blake Martinez threw out the first pitch in Milwaukee:

Rob Demovsky looks at how the Packers could employ their talent in the backfield:

The Tundra Effect has a minicamp wrap up:

NFL Network looks at the timeline on Aaron Rodgers' contract:

Tim Brady thinks the Packers' offense could be the best in the league in 2018:

A rugby player made a video of his reactions to Jordy Nelson playing football: