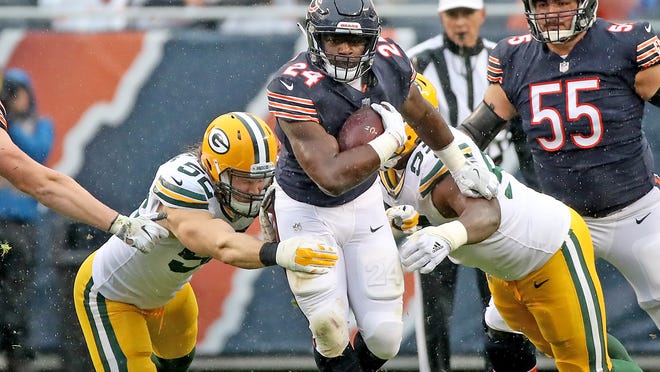 Second in a 13-part series on the opponents the Green Bay Packers will face during the 2018 regular season.

GREEN BAY - Rarely in professional football does a team that reached its conference championship game have an opportunity to make a significant upgrade at quarterback during the offseason, but that’s exactly what the Minnesota Vikings did by adding Kirk Cousins in free agency.

General manager Rick Spielman set a precedent for franchise quarterbacks by rewarding Cousins, formerly of Washington, with a three-year contract worth $84 million — all of which was guaranteed. For the first time in the league’s history, a pro football contract mirrored a deal in the National Basketball Association.

Cousins, who will turn 30 in August, has already made a strong impression with the Vikings’ receivers during organized team activities. They have been quoted as saying the ball comes out of Cousins’ hand with a kind of zip they weren’t used to from previous quarterbacks Case Keenum and Sam Bradford, both of whom took jobs with other organizations. Keenum, the starter for most of last year, signed with the Denver Broncos, while Bradford joined the Arizona Cardinals.

Given the strength of their defense, which was the best in the league last season, the Vikings believe the addition of Cousins could be the missing piece in their Super Bowl pursuit. A year ago they won 13 games and the NFC North crown during the regular season and reached the NFC championship game with a third-string quarterback and their starting running back on injured reserve after just four weeks.

This year, they hope, will be an even larger success.

Here are three things to know about the Vikings:

The Vikings believed they had found their running back of the future when they drafted Dalvin Cook in the second round last spring. Cook, a two-time first-team All-American at Florida State, won the starting job out of training camp and was on the fast track toward Rookie of the Year honors after the first weeks of the season. He carried 22 times for 127 yards in the opener against the New Orleans Saints. He carried 27 times for 97 yards and caught five passes for 72 yards in Week 3 against the Tampa Bay Buccaneers. But then Cook tore his ACL in Week 4 and missed the remainder of the season, forcing the Vikings to rely on Latavius Murray and Jerick McKinnon. Eight months later, Cook is progressing well in his recovery and has already taken part in some team drills. The Vikings are thrilled to have him back.

With Everson Griffen, Danielle Hunter and Linval Joseph, the Vikings already had one of the most dominant front lines in the league last season. Their power in the trenches was the foundation for coach Mike Zimmer’s predatory defense. So Spielman went out and made one of his team’s biggest strengths even stronger by signing free-agent defensive tackle Sheldon Richardson to a one-year deal. Richardson, who turns 28 in October, was the NFL’s Defensive Rookie of the Year in 2013 and made the Pro Bowl in 2014 as a member of the New York Jets before joining the Seattle Seahawks for one underwhelming season in 2017. If he can rediscover the form that made him a first-round pick, the Vikings will have an $8 million steal.

Zimmer is not unlike former Jets coach Rex Ryan in that he always covets more weapons on the defensive side of the ball — even for a unit that finished first in total defense and points allowed last season. So he was undoubtedly thrilled when Spielman used a first-round pick on cornerback Mike Hughes from Central Florida, who was hosted by the Green Bay Packers during the pre-draft process. Hughes and Mackensie Alexander, a second-round pick in 2016, offer a pair of budding talents behind No. 1 corner Xavier Rhodes, considered among the best in the league at his position, Trae Waynes, now in his fourth year, and the seemingly ageless Terence Newman, a Zimmer loyalist who chugs along at age 39. Once again, cornerback should be a strength for the Vikings.

Last meeting: The Packers were already eliminated from playoff contention when the Vikings visited Lambeau Field on Dec. 23, so there was no revenge game for quarterback Aaron Rodgers against the team that effectively ended his season two months prior (when linebacker Anthony Barr broke Rodgers' collarbone during a tackle). His replacement, Brett Hundley, played horrendously against the best defense in football, completing only 17 of his 40 pass attempts and throwing two interceptions. His passer rating of 30.2 told the story of why the Packers failed to score a single point that evening. The final score was Minnesota 16, Green Bay 0.