Backfield battle shaping up as Packers' most intense at training camp 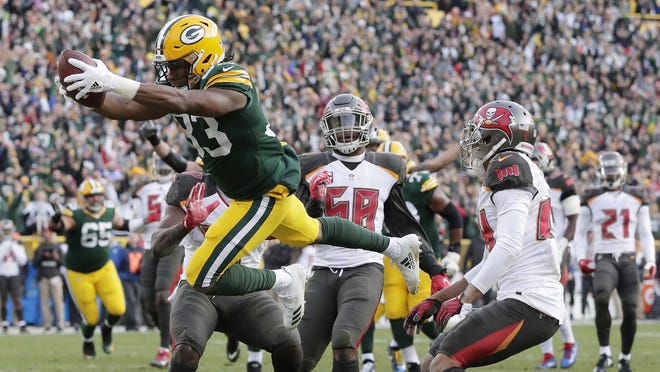 Second in a series of nine position previews leading up to the Green Bay Packers' 2018 training camp.

GREEN BAY — "Next man up" epitomized the Green Bay Packers’ running game during the 2017 season. For 2018, the question to be resolved during training camp is: Which man is best?

A year ago, converted wide receiver Ty Montgomery had a firm hold on the starting job. Montgomery transitioned into a running back during the 2016 season and offered a glimpse of his potential when he rushed for 162 yards in a December game at Chicago.

But Montgomery played sparingly in 2017 after being injured in a Week 4 victory over the Bears. He had only 71 carries for 273 yards and three touchdowns in eight games before being placed on season-ending injured reserve.

Next to be thrust into the spotlight was rookie Aaron Jones, a fifth-round draft pick out of Texas-El Paso, who showed dazzling explosiveness, rushing for 125 yards and a TD in his first start a week later at Dallas and 131 yards and a score two games later against New Orleans. But two weeks after that, Jones suffered an MCL injury at Chicago and yielded the starting job to fellow rookie Jamaal Williams.

A fourth-round pick out of BYU, Williams entered the season as the primary backup and stepped in first when Montgomery went down against the Bears. But a knee injury sidelined him in that same game and gave Jones his chance. When Jones was injured during the rematch against the Bears, Williams finally got the opportunity to show what he could do.

Displaying a pounding, relentless running style, Williams rarely dazzled but delivered consistent, tough yardage between the tackles. He finished the season with 153 carries for 556 yards (3.6 average), highlighted by a 113-yard outburst in the Packers’ overtime victory against Tampa Bay.

With all three healthy again entering camp, the competition for the starting job should be intense.

Standing pat. The Packers like the potential of their young running backs and saw no need to bring in a veteran or invest another late-round draft pick in the position. The most significant offseason event was the two-game suspension Jones received from the NFL as a result of his arrest last October on marijuana-related charges. The repercussions could be significant.

Back for a third straight season on the fringe of the Packers’ roster, Kerridge could be ready to move ahead of Ripkowski, the incumbent at fullback. An undrafted free agent out of Michigan, Kerridge appeared in eight regular-season and one postseason game as a rookie in 2016. A calf injury torpedoed his chances during training camp last year and he was waived off injured reserve after reaching an injury settlement. But Kerridge was added back to the practice squad in November and promoted to the 53-man roster for the final two games. Both Kerridge and Ripkowski are key special-teams players, and Packers coach Mike McCarthy has favored keeping two fullbacks on the roster, so don’t be surprised if both stick.

Keep an eye on

Devante Mays forever will be remembered for fumbling the first two times he carried the ball in the NFL during a dismal 23-0 loss last season to Baltimore. “I know I can play better than that,” said Mays a few days after the debacle. “I mean, the coaches know I’m better than that. I just made a mistake. We all make mistakes, but I’ve just got to go out and do better this next time for sure.” For Mays, “next time” didn’t come until six weeks later, when he carried once for two yards in a season-ending loss at Detroit. But running backs coach Ben Sirmans sounded encouraged before that game, saying Mays was securing the ball better in practice and running with confidence. “I think his ceiling is still pretty high,” Sirmans said. If injuries again take their toll on the Packers’ backfield, Mays could yet get an opportunity to overcome the memories of his inauspicious debut.

How much of a setback will it be for Jones to miss the first two games because of his violation of the NFL’s substance-abuse policy? The penalty won’t keep him out of training camp or exhibition games, but it means either Montgomery or Williams likely will begin the season as the starter. If they perform well, Jones may have to bide his time before getting his chance.

If he can stay healthy, Jones clearly is the Packers’ most gifted running back. His stats last season (81 carries for 448 yards, 5.5 average, with four TDs) compared favorably to those of Minnesota’s more-ballyhooed rookie Dalvin Cook (74 carries for 354 yards, 4.8 average, with two TDs before his season was ended by a torn ACL). But Jones has been sidelined by leg injuries both last season and in college, and must find a way to stay on the field. “He’s just got to get stronger, especially in the lower body," Sirmans said. “That’s something that’s going to help him be more durable, and he knows that.”

Another reason Jones eventually figures to win the starting job? Unequivocal support from Packers quarterback Aaron Rodgers, who last season said he had “absolutely zero worries about him back there.” That kind of endorsement from the face of the franchise should carry a lot of weight.