Every Green Bay Packers season is different, yet some things never change. 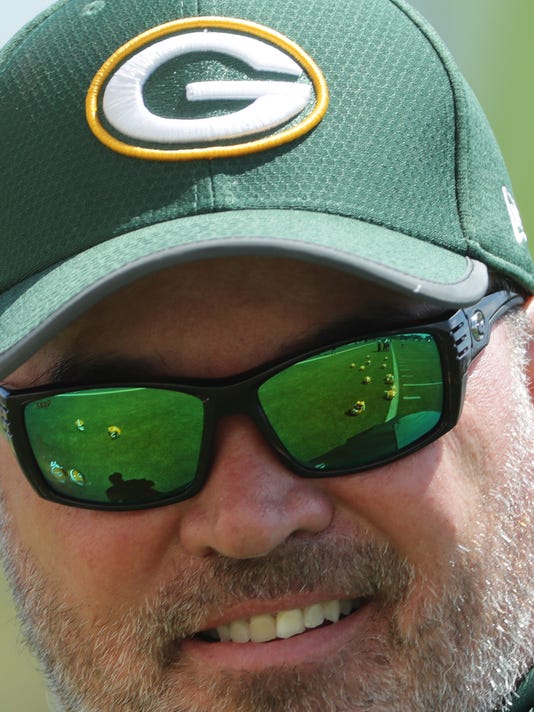 Coach Mike McCarthy and his staff returned from vacation with their practice whistles at the ready, the players came back from the longest break they’ll have from now until the calendar hits 2019 and training camp is nearly off and running.

It’s a vastly different Packers group with new assistants, new schemes and around 30 new additions to the 90-man roster. Old and new will be fired up and ready to set the world on fire.

And then they’ll practice Thursday morning.

“The reality is we're going to go down there and practice for two days and get through the first installs and it's going to look a little rough,” McCarthy said in his pre-training camp news conference Wednesday. “And then we're going to put the pads on (Saturday) and it probably won't look very good.”

It’s a summer ritual and it speaks nothing to what kind of team the Packers will have in 2018. But it’s where most teams start and McCarthy and the coaches are more worried about where they finish than where they start.

Entering his 13th season, McCarthy’s widescreen view of camp is that he must both develop team chemistry and prepare to cut 37 players from the roster. Even those that won’t be here are going to leave with the echo of McCarthy’s forward-looking message ringing in their ears.

During a dismal 7-9 season in which they failed to make the playoffs for the first time since 2008, the Packers were exposed, their shortcomings seeping through the cracks formed from season-ending injuries to quarterback Aaron Rodgers and right tackle Bryan Bulaga.

The offseason casualties were general manager Ted Thompson, defensive coordinator Dom Capers and more than half the assistant coaching staff.

There has been enough change around here that the players can’t help but understand what last season meant to the organization and the community. If they didn’t learn anything from last season then they’re probably doomed to repeat it.

“I think we’re all better for the negative things that have occurred,” McCarthy said. “You talk about knowledge, the ability to learn from your past experiences and really the past experience of others that are shared with you.

“You learn a lot in this business about the mistakes and the ability to overcome adversity. All those, because, hey, this is going to be a rough ride to get to where we want to go.”

McCarthy has tweaked the training camp schedule – as he does almost every year – and will have the players on a regular-season plan right from the start. No early-morning practices, no night practices other than the "Family Night" promotion and consistent days off.

He must integrate free agents such as tight ends Jimmy Graham and Marcedes Lewis, defensive tackle Muhammad Wilkerson and tackle Byron Bell at the same time he’s getting his much-needed rookie class prepared for the regular season.

To that end, he’s going to have his veterans face each other in team drills as much as possible. The thought is he’ll give cleaner looks to the guys who are going to see them again in the regular season.

“If you call a play and you have an overloaded defense, Aaron Rodgers is going to change the play,” McCarthy said. “Now, if there’s four rookies in there, just hold onto it and hopefully something happens (that is) good.

“But if a younger quarterback is in there and if he’s got a bad look, he may not recognize it and it’s kind of a wasted play.”

The schedule and the matchups are all part of McCarthy’s persistent attempt to get his team off to a healthy, fast start. The Packers have three division games in the first five weeks – two of them at home – and he can’t afford to neglect his starters in the name of developing rookies.

That said, cornerbacks Jaire Alexander and Josh Jackson – the top two picks in general manager Brian Gutekunst’s first draft – are probably going to be elevated to that veteran status in a hurry. Both are on the fast track because of some of those negative things that happened last year, most notably in the secondary.

“It really comes down to the individual,” McCarthy said. “I think our two young guys have really done a good job picking it up during the offseason program. This is a whole different level of completeness and responsibility and what they have to do day in and day out.

The blanket message to the team is that the page on 2017 has been turned and the focus is on what can be accomplished in 2018. Some media members are predicting great things for the Packers, while others think they’ll spend January at home.

The return of Rodgers to full health certainly makes the Packers competitive again, but it has been seven consecutive seasons without a Super Bowl victory and people inside and outside the organization are getting restless. It’s hard for McCarthy to look past Thursday’s first practice, but he plans on driving home the idea that everything they do is in the name of pursuing the Lombardi Trophy.

“There’s great football teams out there, but paper championships – I’ve never really gotten caught up in that,” McCarthy said. “Whether you’re a favorite or not a favorite, we understand who we are. We’re the Green Bay Packers.

“This is the 2018 version, 100-year anniversary. So, there’s a lot of great energy around here that we haven’t had in the past. We’re going to try to take advantage of it and apply it, but our focus is on this training camp because we can’t get to where we want to go without a highly competitive training camp.”

Just don’t judge camp on the first couple of practices.

Note: Practice will be moved inside the Don Hutson Center and closed to the public in the event of inclement weather. For the complete training-camp schedule, go to PackersNews.com.