Marcedes Lewis is an old-school tight end who loves his red-zone touchdowns but gets a certain thrill out of run-blocking. 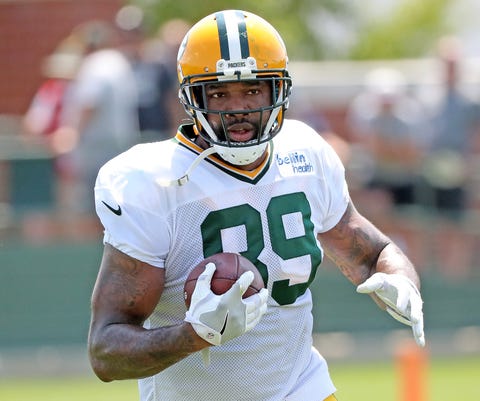 GREEN BAY – Every time he lines up and makes one of those plays that make a coach’s face radiate with excitement, you expect to hear the crowd at Ray Nitschke Field roar with approval.

This is the Green Bay Packers’ free-agent tight end, the one who ranks up there with the very best in his craft, going unnoticed.

How could this be?

In this era of oversized wide receivers playing modified tight end positions and working over the field, it’s no wonder glamour guys like Jimmy Graham get all the attention.

But if you really want to see a guy who could have a huge impact on the Packers this season, watch the 6-6, 267-pound — that’s what he’s listed at, but probably hasn’t weighed in 20 years — Lewis stick his hands into his man at the line of scrimmage and push him somewhere he doesn’t want to go.

“We had a double-team block in Family Night and I literally just took a step and he just threw a guy right across my face,” veteran tackle Byron Bell said. “I didn’t have to do too much work.

“I had another block where I was supposed to come down and bounce back out (to help the tight end), and he was like, ‘Bro, I got him.’ He’s one of the better run blockers in pro football right now, if not the best.”

PACKERS PODCAST:Defense being put to the test

The Packers thought they had that guy last year when they signed Martellus Bennett to a three-year, $15 million contract. It turns out they only had him for a half of a season and his pass-catching was practically non-existent.

In the short time Bennett was there, his run-blocking talents were evident. The Packers were starting to find a complement to quarterback Aaron Rodgers right about the time their season dropped into a sinkhole.

Rodgers broke his collarbone, the offensive line collapsed under the weight of so many injuries and Bennett decided he needed shoulder surgery.

During the offseason, general manager Brian Gutekunst addressed the pass-catching part of the tight end position, but anyone who has ever talked to a scout knows Graham’s reputation around the league as a blocker is terrible.

So, after four days of trying to convince Lewis to come for a visit, the veteran finally agreed and flew in May 24, just five days after turning 34 years old. He met with McCarthy and then returned the next day for more interviews. He noticed that things were moving in a direction he hadn’t anticipated.

“I met with all the other coaches and GM and everything and all of a sudden I’m taking all these physicals,” Lewis said. “Clearly, they had already had their minds set on me signing.”

About an hour before he hopped on a plane home, Lewis inked a one-year, $2.1 million contract, including a $500,000 signing bonus. Just like that, they had a guy whose reputation preceded him both as a player and a person.

In 12 seasons with the Jacksonville Jaguars, Lewis was a fixture on the field and the locker room and a media and fan favorite. He started 157 of 170 games, caught 375 passes for 4,502 yards (12.0 average) and 33 touchdowns, despite playing with a hodgepodge of mediocre quarterbacks.

Unlike the Grahams, Jared Cooks and Jermichael Finleys of the world, Lewis is an old-school tight end who loves his red-zone touchdowns but gets a certain thrill out of run-blocking.

“I take a lot of pride in what I do,” Lewis said. “Obviously, catching the ball is really fun, but pancaking a guy is fun, too. I love doing both.

“I think when I had my visit here and met with Mike, just his attitude and the next level where he wanted to take the offense to, I was a good fit. It’s still a blessing and a privilege to play in this league and I’m going to give you all I’ve got.”

So, what is it that Lewis has?

“First of all he’s 6-7, 280, rock-solid paws,” Bell said. “I mean, he’s been in the league for a reason. He’s a great run-blocking tight end, but he’s also a great reception tight end. A lot of people forget he had (six) touchdowns last year.”

When linebacker Clay Matthews first saw Lewis line up next to 6-6, 305-pound tackle Kyle Murphy during OTAs, he said he wasn’t sure who was the tackle and who was the tight end. Matthews has had to go up against Lewis twice during his career and he said there are few better in the run game.

“I think he knows that’s what he excels at. I think last year he had (six) touchdowns and can still be a viable threat in the receiving game, but mostly he knows, ‘I’m a good blocker and I might as well do what I’ve really good at.’”

Under McCarthy, the Packers have not had a full season in which they’ve had a true blocking tight end and just the little bit of running they were able to do with Bennett and emerging guard Justin McCray last year showed what Lewis might be able to add to the offense.

The prospect of putting Lewis next to McCray and Bryan Bulaga or Lane Taylor and David Bakhtiari has to have McCarthy, a former tight ends coach, dreaming about double-team blocks.

“Two plays that jump out to me is where the leverage and the particular alignment of the defense wasn’t clearly in his favor,” McCarthy said recently. “But his ability to cut and anchor on a block and maintain the line of scrimmage has been impressive.

“We haven’t really had that here with a man of his size and his ability.”

Lewis thinks he can be a factor in the passing game, too. After 13 years of inconsistency at the Jacksonville quarterback position, he said he feels reborn playing with Rodgers. Graham is going to be the favored tight end target, but Lewis, said plays will be there for the making in the passing game.

And if he’s making them, then maybe people will start noticing him.