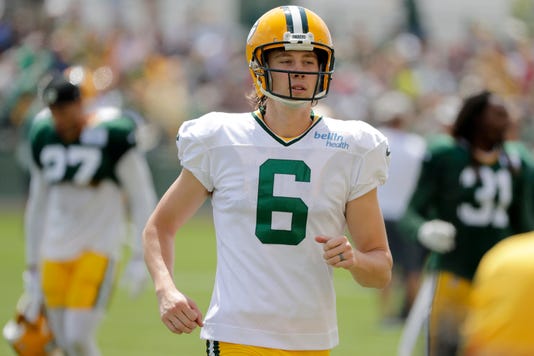 GREEN BAY – Rookie JK Scott might not have validated Green Bay Packers general manager Brian Gutekunst’s decision to draft him in the fifth round — he has yet to punt in a game, after all — but it’s taken him only 30 punts to change perception.

Scott has punted 30 times for distance against a full rush so far in his first NFL camp. By an unofficial count, he has averaged 51.53 yards with a 4.54-second hang time on those punts. For comparison, Scott’s average would have led the NFL last season, almost two full yards better than Tennessee Titans punter Brett Kern’s 49.7-yard average.

Punting in August is much different than punting in December, the same as punting in practice is different than punting in games. Scott will get his first chance to punt in a game setting Thursday when the Packers open their preseason against the Titans. Regardless, it’s always risky to draft a punter, and Scott was an especially unpopular pick among some fans because the Packers appeared to be set at the position after a strong rookie season from Justin Vogel.

Now, it’s clear that if Scott continues punting as he has in camp, the Packers will have a real weapon who can flip the field.

“At that time in the draft,” Gutekunst said Tuesday, “he was in my opinion the best player available for us to take. For me with JK, his consistency through high school and college, it's been pretty remarkable. He does have rare leg talent. I'm sure all you guys have seen that out there. I just thought it was a chance to upgrade our team. At that time, I thought that was the best decision for us."

What’s been remarkable about Scott is his consistency.

Vogel, who had a 44.4-yard gross average and 41.6-yard net as a rookie, drew frustration from coaches because there was a wide range between his best and worst punts. Scott hasn’t crushed all 30 punts this preseason, but only twice has he had a punt travel fewer than 40 yards. Only three times has he had a punt hang fewer than four seconds.

"JK has been in the pressure spots before," Packers special teams coordinator Ron Zook said. "He’s a competitor and he wants to do the best he can. Brian and I were talking about him a little bit today, one of the things that excites me about him, is he’s all ears. He’s like a sponge. Anything you tell him he wants to try to work on and get better. He knows he’s got a lot of work to do. But there’s no mistaking his God-given ability."

On game day, defensive coordinator Mike Pettine said he likes to coach from the booth instead of being on the sideline because it gives him access to more information.

Pettine, a self-described “information guy,” said he’ll spread a lot of sheets out in front of him during a game. It helps to have an area to store all the information, as opposed to being on the sideline.

“When you’re on the sideline,” Pettine said, “you’re usually limited to kind of what you’re carrying, and I don’t want to be that guy that looks like he’s flipping through a Cheesecake Factory menu while I’m looking for stuff on defense. So I spread out a lot of stuff.”

Pettine’s preference to coach from the booth is no different than former Packers defensive coordinator Dom Capers, who also liked the eagle’s-eye view. Communication can be more impersonal when a coach isn’t on the sideline, but Pettine said that isn’t necessarily a bad thing.

“I think the guys will be happy I’m in the booth,” Pettine said. “I can be a bit of a hot-blooded Italian every now and again. I think they’d rather me (be) upstairs than ranting and raving on the sideline.”

Pettine said he chose to coach from the sideline when he was defensive coordinator in Buffalo during the 2013 season because offenses were going up-tempo, forcing him to make quicker calls. Once the NFL allowed one defensive player to wear a communication helmet, Pettine said it “cinched” his preference to be in the booth.

“I found in Buffalo when I called it from the sideline in 2013,” Pettine said, “that I felt like I was shooting from the hip a little too much and regretted, ‘Oh wow, I wish I thought of that.’ Whereas at least now I can look at the call sheet, cross out what I’ve called. And that’s difficult to do when you’re down on the sideline.”