LeRoy identifies what he thinks are the strengths and weaknesses of the 2018 Packers team and talks about the impact Chicago Bears acquisition Khalil Mack will make with his new team. Packers News 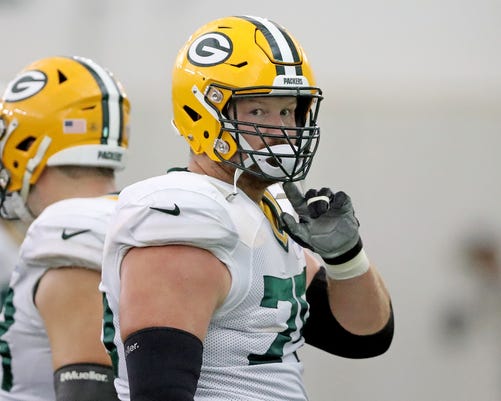 The Packers practiced indoors on a rainy Wednesday in preparation for their regular-season opener Sunday night against the Chicago Bears.

We'll start with Tom Silverstein's look at how the Packers will be banking on their investment in their offensive line to keep new Bears pass rusher Khalil Mack at bay Sunday night. It will be a particularly rough assignment for right tackle Bryan Bulaga in his first game back from ACL surgery.

For rivalry's sake, let’s start with Bears defensive end Akiem Hicks’ take on the matchup between Mack and basically anybody who tries to block him. In a conference call with state reporters, Hicks, who led the Bears with 8 ½ sacks last year, basically called it a one-round fight.

It so happened that Mack was sitting a few feet away from Hicks in the training room, so his bravado might have been a bit tongue-in-cheek.

But he didn’t stop there.

And, speaking about right tackle Bryan Bulaga having to block Mack while coming back from a torn ACL, he added, “Well, I think it affects guys when they come back from an injury, especially older guys like Bulaga. But I don’t think he had a chance to block Khalil Mack in the first place.”

Be sure to read Tom's entire column here:

The #Packers have invested almost as much money in their offensive line as the Bears did in Mack and Sunday will be the first of many opportunities to show if it has been worth it. https://t.co/B5Y5dISfwG

The Bears simply can't contain their excitement over landing Mack:

Will the #Packers be able to hold off Khalil Mack? We'll find out on Sunday. https://t.co/ofejlzg2t2

Randall Cobb and other Packers players couldn't hide their disappointment over losing Mack to the Bears:

Ryan Wood and Jim Owczarski discussed the latest on Mack and the Packers' outlook at inside linebacker:

The Packers are playing catch-up at inside linebacker after bringing in some new faces because of injuries, writes Owczarski:

New from JSOnline and PackersNews: New Green Bay Packers inside linebackers are playing catch-up in advance of season opener https://t.co/0XOSw7yog3#Packers

Here's what you need to know about the Bears, via Owczarski:

New from JSOnline and PackersNews: Packers' Next Opponent: Quick takes on the Chicago Bears https://t.co/VyBJBmDvwe#Packers

Aaron Rodgers shows some comedic chops in this IZOD commercial:

Aaron Rodgers up his comedic game by starring with "Saturday Night Live's" Colin Jost in a new ad for @IZOD: https://t.co/OfJt4lWDki#Packers

Packers fan Steve Miller was honored to be invited to perform a concert at Lambeau Field the evening before the season opener:

New from JSOnline and PackersNews: For Packers fan Steve Miller, there's a little Lombardi in his legendary rock band https://t.co/yglnDpFE8F#Packers

New from JSOnline and PackersNews: Lambeau Field great place for kids, but maybe not on game day https://t.co/QZABZBEeB4#Packers

Has Jon Gruden been sending a message about Khalil Mack since the end of last season? @RobertKlemko digs into his commentary https://t.co/grNb6tzjeJ

ESPN's Rob Demovsky looks at the 87 players who wore the uniforms of both the Packers and the Bears during their careers:

In the nearly 200 years of combined football played by the Packers and Bears only 87 players have suited up for both teams. Their allegiance, however, usually stays on one side of the rivalry. https://t.co/Oyk4vB3lbe

Josh Jackson was the only rookie cornerback to produce a PFF grade above 90.0 this preseason. pic.twitter.com/wI2iIY3LtY

And we'll conclude with a look at where the Packers stand in the MMQB's first weekly Power Rankings Poll:

Four teams got No. 1 votes in our Power Rankings Poll, but it’s a familiar team on top https://t.co/RlitidaCYd