Did Aaron Jones' absence reduce the Green Bay Packers' chances of getting a victory rather than a tie Sunday against the Minnesota Vikings? 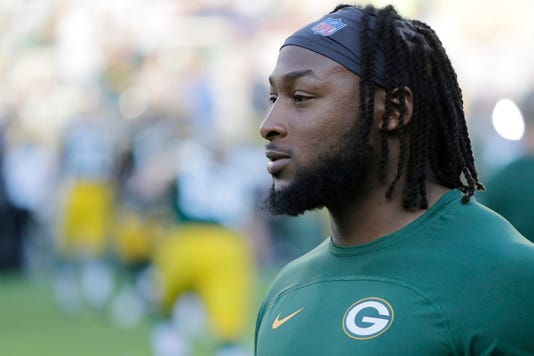 Did Aaron Jones' absence reduce the Green Bay Packers' chances of getting a victory rather than a tie Sunday against the Minnesota Vikings?

Welcome to your Morning Buzz, rounding up news and views regarding the Packers from around the web and here at PackersNews.com. Green Bay (1-0-1) will hit the road for the first time this season when it faces Washington at noon Sunday.

Tom Silverstein looks at how Jones needs to atone for the two-game suspension that may have been a factor in the Packers' failure to beat the Vikings.

It wouldn’t be a stretch to think that if the second-year running back had been available Sunday — instead of watching from an unknown location due to the two-game suspension the NFL levied against him — the Packers wouldn’t have had to settle for five field goals in a 29-29 tie with the Minnesota Vikings.

Jones returns from his two-game punishment for violating the NFL’s substance abuse policy this week, and he has a lot of making up to do. His poor decision to drive a vehicle after smoking marijuana could be the reason the Packers are 1-0-1 instead of 2-0.

To accept that assumption, consider his production from last year.

When healthy, he added an offensive dimension the Packers hadn’t had since Ahman Green was setting the club record for rushing yards in the early-to-mid 2000s. And Jones has an ability to dodge defenders that Green didn’t have.

You can read the entire column here:

The #Packers need someone who can force McCarthy to call more running plays and keep the offense balanced. Jones can do it. https://t.co/2ZdPuEyUCR

"This one gives me heartburn": @leap36 breaks down the Vikings' 75-yard touchdown pass. https://t.co/MnIqVBqLBe

Even in Minnesota, they're not happy about the rule that penalized Clay Matthews' hit on Vikings quarterback Kirk Cousins:

Here's a look at the #Packers' first road opponent of the season. https://t.co/72ukUD6CcF

Ryan Wood takes note of how Packers running back Ty Montgomery has improved his pass blocking:

Ty Montgomery has come such a long way with his pass pro. Two years ago, no way he picks up a blitzing Harrison Smith like this. Stonewalled him. pic.twitter.com/3n6vTmYRUj

Sure looked that way Sunday against Green Bay:

Is this the best receiving duo in the #NFL? https://t.co/3M8YM9zcOd#Vikingspic.twitter.com/9OFs1O0WYD

Khalil Mack was wreaking havoc again for the Bears in Monday night's win over the Seahawks:

But fans in Chicago are wondering why the Bears drafted Mitch Trubisky to be their quarterback last year instead of the Chiefs' red-hot Patrick Mahomes:

Should the #Bears have drafted Patrick Mahomes instead of Mitch Trubisky? Should Bears fans chill out about this debate in Week 3? Trubisky's edge on Cutler; Why are the Bears always bad on offense when they're good on defense and vice versa? First-and-10:https://t.co/lGQPobmOkT

The Packers slip a bit in ESPN's Power Rankings:

Major shakeups in the top 3 headline our Week 3 Power Rankings.

And it's a similar story with The MMQB rankings:

With the Patriots losing, four different teams got No. 1 votes in our MMQB Power Rankings Poll https://t.co/t4xAJ9bBsS

The concept of letting first-round rookie quarterbacks spend a season learning from the bench (the Brett Favre/Aaron Rodgers model) seems to be a thing of the past:

Three of the NFL’s rookie QBs drafted in the first round have already played for their teams, and @AndrewBrandt believes the other two will see action at some point this season as well https://t.co/vyQ8KuLJku

Be sure to join Pete Dougherty for his weekly chat answering fans questions at 11 a.m. CT Wednesday:

And we'll close with this look at a pro wrestling icon who spent more than a year trying to make the Packers' roster: