Packers right tackle Bryan Bulaga returned to the field from a torn ACL in just x months, but he’s still finding his footing heading into Week 3. 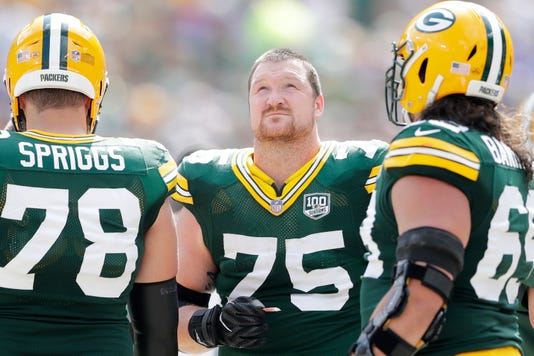 GREEN BAY – It was an accomplishment, and then it wasn’t.

Such is life in the National Football League. You’re hurt? What is the injury and how long might it take to recover? How fast can you get back? Wow — that was fast. You’re back? OK. Whatever.

Depending on the nature of the injury, that process may play out over the course of many months — or a year — but it can feel that quick. Green Bay Packers right tackle Bryan Bulaga is in that boat. He tore his right anterior cruciate ligament on Nov. 6, 2017. He was cleared to practice on Aug. 3, 2018. He played his first game, just 12 snaps, on Aug. 30.

Then, hello Khalil Mack on Sept. 9.

RELATED: Packers left out of top 10 in Forbes' franchise rankings

At this point, his knee is physically healthy. But to go from practice reps to a dozen snaps against Kansas City backups in the fourth preseason game to 100 percent of the plays the first two weeks of the regular season — there’s still a final bit of “recovery” to finish up for the right tackle.

“To a degree — I feel like the recovery to the knee, it’s done — but the whole part of getting back into the technical part of the game is a process I feel like,” Bulaga said. “I feel like, not just the speed of the game, that’s all slowing down to where it needs to be I feel like, it’s just a matter of being comfortable again in space and doing certain things and just seeing the defense the way that you were used to before you hadn’t played football in 10 months. It’s just kind of one of those things that from week to week you start to settle in and get more comfortable. Things start to happen more natural.”

The 29-year-old went through this before in 2014 when he came back from a torn left ACL, which initially helped him in the physical rehab and the mental reclamation to football.

RELATED: Clay Matthews hoping to 'get back to playing ball'

RELATED: Aaron Jones will have to work his way back into lineup

But here in advance of Week 3, he’s still finding his footing with his technique. That’s been on display through two weeks. Pro Football Focus has rated Bulaga as the league’s 55th-best tackle (out of 73) with a 58.6 overall grade, and a 71.8 pass blocking grade (36th). It has him giving up seven total pressures (tied 60th).

“It’s kind of just re-training the muscle to just do those things and be natural — kicking out to a defensive end and he redirects inside and you push him back off — that’s all things muscle memory triggers,” Bulaga said. “And when you don’t get to do it for so long, those things kind of shut off a little bit. Then it takes your body a bit to readjust. Training camp is one thing. A preseason game is one thing. Live speed, full bore games are a different animal. So, I mean, I remember in ’14 when I came back off the left one, it took me, I feel like, longer that year to feel comfortable than it is now. I don’t know why that is but it just is.

“I feel like I’m getting more comfortable, faster, now than I was then. Maybe it’s because that was the first one I’d ever done and you are thinking about it, and maybe I was, but this time around it’s just — yeah there are things that still don’t feel right. Not from a knee standpoint but just from a technical standpoint, but I feel like it’s coming around faster.”