Packers DC Mike Pettine is consistently trying to create favorable match-ups, whether it’s man to man, man to defensive call or man to the situation. 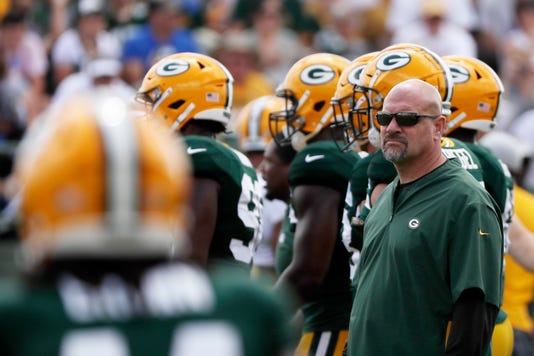 GREEN BAY – If you can’t pay attention, you can’t play for Mike Pettine.

It’s as simple as that.

It’s not the only thing the Green Bay Packers defensive coordinator demands of his players but its importance has been on display every time the defense has been on the field.

Watch the Packers' sideline sometime when the opposition has the ball. Players are gathered tightly around the assistant coaches assigned to the sideline, waiting to hear what personnel group is up next. Miss it, and the rhythm of substitution is broken and things get scrambled.

"You have to be on cue every single second,” inside linebacker Blake Martinez said. “I commend those guys. I’m lucky to be out there the whole time, so I don’t have to worry about it. But I still have to orchestrate it.”

So far, Pettine has used no less than eight different personnel groupings; players shuttle in and out like the sideline is a commuter train. It’s dizzying sometimes to keep track of who’s on the field, but there is a method to the madness.

Pettine is consistently trying to create favorable match-ups, whether it’s man to man, man to defensive call or man to the situation.

In some cases, such as the secondary, he’s trying to make sure he gets the most out of his deepest position. In other cases, he’s highlighting the strength of a player and hiding the weakness of someone else.

“A lot of it is, you want to get your best 11 out there in that situation,” Pettine said. “So, often it’s a function of who do they have out there, what do they do in a given situation with the grouping that they have?

“So, it’s all game-plan driven, and it’ll change week-to-week.”

RELATED: Packers left out of top 10 in Forbes' franchise rankings

RELATED: Clay Matthews hoping to 'get back to playing ball'

And within each grouping the players on the field – mostly on the defensive line and at outside linebacker – can change.

Martinez, along with cornerback Tramon Williams and safeties Ha Ha Clinton-Dix and Kentrell Brice, are the only players who have played all 143 snaps. Pettine has used 20 different players in the first two weeks and that does not include two injured players, safety Josh Jones and inside linebacker Oren Burks, both of whom are expected to play Sunday at Washington.

“We’ve talked about from day one with this package, the complexity of it comes with the versatility of the players,” passing game coordinator Joe Whitt said. “That’s part of trying to keep it simple for them.

Martinez is the conductor of it all.

Sometimes the players have to hurry because either the call doesn’t come right away or the offense gets to the line of scrimmage in a hurry. Everyone must be ready at a moment’s notice to run out on the field and replace someone.

Everyone must pay attention.

“You must, you have to,” said inside linebacker Antonio Morrison, who rotated with Korey Toomer against Minnesota last Sunday. “Any play could change. You don’t know, one play, five plays, so you have to be in the game.

Martinez doesn’t have to get the players on the field – the coaches do that – but he does have to make sure the personnel is correct for the call and the players are lined up correctly. He shouts out the defensive call and makes any adjustments based on how the offense lines up.

It has not always been a perfect operation.

Against the Vikings, the defense was facing an important third and 5 late in the third quarter when a miscommunication led to only 10 players being on the field. Quarterback Kirk Cousins avoided a sack by outside linebacker Reggie Gilbert and dumped the the ball to receiver Laquon Treadwell for what would have been a first down, but Treadwell dropped it.

“It wasn’t like (confusion with) personnel, but it was, in this personnel we want this guy in instead of this guy,” Martinez said. “One guy came out and another guy didn’t go in, didn’t get the re-call.”

Getting the call and getting on and off the field can be a challenge, especially if you’re in on the tackle near the opposite sideline or way down the field. At the same time a player is peeling himself up off the ground, he’s got to remember to look to the sideline and see if he’s supposed to be on the field for the next play.

Those who are on the bench have the luxury of being a couple of feet away from the call being bellowed out.

“You don’t want to be scrambling to hear the personnel and rushing to get lined up,” rookie cornerback Josh Jackson said. “That’s what makes it difficult.

There have been times when Pettine has been extreme with his variations.

Players were flying on and off the field at a dizzying pace and the coaches were screaming out personnel changes every play or two.

“When Pettine wants a different group he calls it and I echo it and I make sure that group gets in,” said secondary coach Jason Simmons. “So, his mindset on what he wants to do and the look he wants to show the QB, he has that. But the main thing for us is, I get it echoed, I get that personnel group out there.”

At some point during the season, the substituting won’t look quite as chaotic as it does now. Martinez said the players are getting used to all the shuffling and communication between everyone is getting better.

He doesn’t think it will be long before it’s a smooth operation.

“I think it will be good for us once we get the rotation down well,” Martinez said. “Other teams will be like, ‘OK, who’s coming out, who’s going to cover, how are we going to get this matchup?’, and they’re not able to get in the right play they want.

“It’s been pretty good. If anything it’s been random flukes here and there."