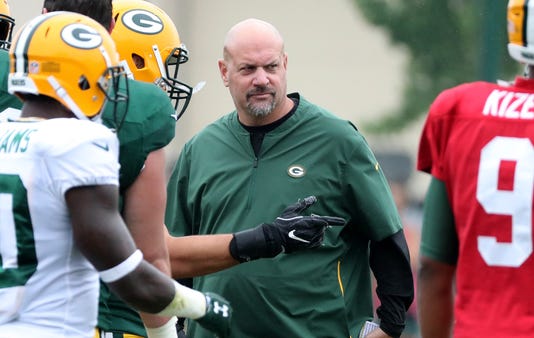 After a players' day off Tuesday, the Packers (1-1-1) will resume preparations to host the Buffalo Bills (1-2) at noon Sunday.

We'll start with Tom Silverstein's column on defensive coordinator Mike Pettine's reluctance to blitz much in the first three games, even less than Dom Capers did in his final season.

When Green Bay Packers coach Mike McCarthy hired Mike Pettine to be his defensive coordinator, there was a segment of the team’s followers who thought the opposition better buckle its seat belts because here comes the blitz.

As Rex Ryan’s coordinator with the New York Jets, Pettine carries with him a reputation for designing exotic blitzes and using them against any quarterback who dares to throw against him, Tom Brady included.

So far, that Mike Pettine has yet to surface around these parts.

The amount of daring Ryan and Pettine brought to weekly game plans has been undoubtedly exaggerated, so it may not even be fair to say Pettine has been conservative in his calls through the first three weeks of the season.

But for all those fans who thought Pettine would be far more aggressive than his predecessor, Dom Capers, here’s a reality check: Capers loved to send more than four rushers at a quarterback and in his final season pressured with five or more roughly 33 percent of the time.

Pettine, meanwhile, has pressured with five or more 17.5 percent of the time, or roughly half as much as the oft-criticized Capers.

Be sure to read the whole column here:

The name of the game in the NFL is pressure and the Packers just aren’t getting any. https://t.co/fs4Iyv9H14

Before injuring his foot, Breeland, a four-year starter in Washington, was considered the top veteran option on the market. https://t.co/PvWiWJPTFY

I wanna thank the packers organization for taking a chance on me when 31 other teams wouldnt Ima make it my purpose to show the world that this was the right decision on behalf of me and… https://t.co/b7LlBHHVZh

.@leap36 saw a lot of communication issues on defense in Sunday's loss at Washington. https://t.co/1PpNadycaY

Buffalo will come to Green Bay fresh off a stunning 27-6 upset victory at Minnesota. Jim Owczarski looks at what you need to know about the Bills:

The #Bills will head to Lambeau Field Sunday fresh off one of the bigger NFL regular-season upsets in decades. #Packershttps://t.co/AbeqndzBZw

What kind of game can the Packers' defense expect out of Bills rookie quarterback Josh Allen? Former NFL lineman Geoff Schwartz wasn't impressed with Allen's showing against the Vikings:

Bills fans told me to watch the film on Josh Allen's first half because it was more than the "box score"... Well I did. He completed 2 swing passes, bubble screen, screen, shovel, checkdown, a 3 yard pass, 3 hitch routes to his right. Hit a wide open dude on a great play design

Yes, they did touch on THAT penalty. https://t.co/KuTCWDJSze

What's the old saying about one picture being worth a thousand words?

This is one hell of a shot from ⁦@jmatthe79⁩. Says it all without saying a word. pic.twitter.com/NS01KzcoCN

ESPN's Mike Golic is on a crusade:

It did seem to be getting out of control during Monday night's Steelers-Buccaneers game:

So this is the first game in 18 seasons where both teams were flagged for multiple roughing the passer penalties. https://t.co/mousDKXeT9

Aaron Nagler shares his take on the subject via Cheesehead TV:

I had some thoughts about the clown show that is Roughing the Passer in 2018: https://t.co/qoEykXmfdn

The #Packers have a voice on that committee in Mark Murphy:

“You want some clarity and how can we communicate and maybe make it more of a clearer situation. So, but yes, Mark’s been very involved from that perspective, yes.” - Mike McCarthyhttps://t.co/NidyhZBiFqhttps://t.co/dnGUgtzSeH

Peter Bukowski takes a video look at pivotal plays in the Packers' loss at Washington for Acme Packing Co.:

Second-and-Ten: A look back at the most pivotal plays from the Packers’ week 3 loss in Washington https://t.co/vUt4BZctze

Vikings defensive end Everson Griffen is having mental-health issues, according to the team:

Griffen is being evaluated and treated at a mental health facility following Saturday's frightening behavior. https://t.co/cnDQ7RWaeQ

If you're going to Detroit to see the Packers on Oct. 7, Rich Ryman takes a look at other things to do in the Motor City:

#Detroit would be good place to see #Packers play. Tickets are cheap(er) and there's a lot to do in the Motor City.https://t.co/38uHqyMRhHpic.twitter.com/vrxGtDlaL5

So who took the worse tumble in The MMQB's weekly rankings: Packers or Patriots?

The Chiefs, Rams and Eagles make up the top three after Week 3 in the MMQB Power Rankings Poll: https://t.co/V5gj6ziumFpic.twitter.com/4x44pGEVb9

Can the Packers possibly be ranked lower than the Browns?

The top-ranked Rams are on pace to outscore their opponents by *only* 352 points, or 22 per game. https://t.co/huvLT6r1y9

And if you were thinking about buying the home of former Packers receiver Jordy Nelson, you're too late: