What you need to know about the Packers-Lions game Sunday afternoon at Ford Field. 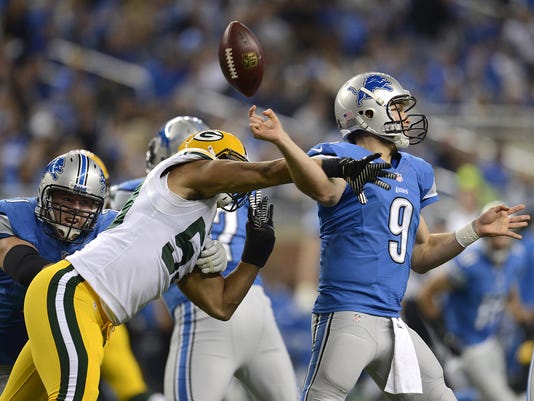 PROPERLY CENTERED: The Bills game marked the first time that quarterback Aaron Rodgers lined up under center since injuring his left knee. The significance of that is it gives the offense a better opportunity to run some of the play fakes that have become prevalent with the high-powered passing attacks around the league. It’s hard to have a run threat when the quarterback is consistently in shotgun or pistol formation. The defense knows which way the run is headed if the back is to either side of Rodgers. It’s likely Rodgers will line up under center more against the Lions. “That’s kind of why I wanted to go under is I wanted to give more of a threat of the run,” Rodgers said. “If I’m able to move similar to how I played last week, it allows us to do some action stuff and some movement stuff, which is a lot harder fake-wise when you’re in the pistol or the gun the entire time. I’d like to, if I’m feeling good, be back out there under center and give us a better run-pass look.”

ZERO LOOK: Usually zero coverage entails all but a couple guys blitzing the quarterback, but defensive coordinator Mike Pettine created his own version when he went with a personnel grouping that featured no defensive linemen against the Bills. The Packers are carrying only four defensive linemen on the roster and veterans Kenny Clark and Mike Daniels played an excessive amount of snaps. So, Pettine went with five linebackers and six defensive backs on some third downs. He said it was in part to create a different look and part to give his defensive line a rest. It’s possible he'll use the package more Sunday. “It was obvious pass and just wanting to get, having a variety of skill sets on the field, that way we could rush any of those guys, we could drop any of them,” Pettine said. “I don’t think we used it that often. It’s something that could be week-to-week.”

OUT WITH BILLS GAME: The Packers celebrated their shutout against the Bills, but they also realize it came against a rookie quarterback playing on the road against an unfamiliar scheme. This week, they’re facing 10-year veteran Matthew Stafford, who last year ranked in the top five in completions, passing yards and touchdowns. He also had a magnificent day against the Packers in a November game at Lambeau Field and followed it up with another good day against the Packers in the season finale. With three quality receivers – Golden Tate, Marvin Jones and Kenny Golladay – and a new-found running threat – Kerryon Johnson – the defense will be facing a different challenge vs. the Lions. “It’s easy to pop in film of the Lions, especially at home, and see that group of receivers, that group of running backs, that quarterback and know what a big challenge we’re in for,” Pettine said. “And we’re going to have to play much better than we played against Buffalo to have good results.”

KEEPING UP WITH JONES: As much as running back Aaron Jones brings to the offense, there was a reason he didn’t play as many snaps as some would have wanted. He was responsible for two blocking mishaps, one of which resulted in Rodgers getting hit by linebacker Tremaine Edmunds and missing an easy third-down completion to receiver Davante Adams. Jones has the talent to be an every-down back, but he still has some things to clean up in protection. “But based on things that we’ve seen in practice, he seems stronger, his technique and those things seem better,” running backs coach Ben Sirmans said. “But it’s still an aspect of his game that he’s got to keep working on to improve. He’s not there yet, but we’re working towards it.”

ROOKIE ORIENTATION: If veterans Davante Adams (calf), Randall Cobb (hamstring) and Geronimo Allison (concussion/hamstring) can’t play, Rodgers is going to be counting on his rookie wide receivers to contribute. Marquez Valdes-Scantling has already seen some action, but J’Mon Moore and Equanimeous St. Brown could be called upon to play a role. The coaches have been preparing them all week. “We have to kind of tie it down from our end coaching-wise and these young guys from their end, making sure they understand the game plan, all the possibilities,” offensive coordinator Joe Philbin said. “It's not necessarily the huddle call, I think they’re good there. But things change post-snap.”   –Tom Silverstein

The Mike McCarthy-Aaron Rodgers flap might be the best thing that could have happened for the offense. It’s time to get the two on the same page and start to open things up. Rodgers practiced in full Thursday and McCarthy may feel more comfortable using Rodgers the way he has before he hurt his knee. Packers 31, Lions 24

Randall Cobb isn’t playing, and Davante Adams and Geronimo Allison are iffy, so the Packers could be badly shorthanded at receiver and counting far more heavily on rookies Marquez Valdes-Scantling, J’Mon Moore and Equanimious St. Brown than they’d like. Detroit has a real quarterback, too, so the guess here is that the desperate Lions find a way to win at home. Lions 28, Packers 24

The Packers have been a hard team to figure out, but they’re not the only ones. The Lions have lost three games. Their only win: against the Patriots. Fittingly, this is another difficult week to decipher. The Packers' receiver group is decimated with injuries and it’s unclear how effective the Packers' passing game can be. But maybe that’s a blessing in disguise, forcing the offense to rely on its running game, and specifically Aaron Jones. Here’s guessing the two Aarons will be just enough to prevail. Packers 23, Lions 21

I’m not entirely convinced the Packers offensive scoring issues have been fixed and that the defense has truly turned a corner with a pass rush, and the Lions have just enough talent to take advantage of that at home. Lions 27, Packers 24

Provided Davante Adams plays, the Packers should have enough firepower to keep pace with Matthew Stafford's Lions. The defense is riding high after shutting out Buffalo and it appeared that cornerback Kevin King might be ready to return from injury. Look for a much-sharper Aaron Rodgers and a big game from Aaron Jones. Packers 31, Lions 27