Former Packers all-pro safety LeRoy Butler and reporter Tom Silverstein analyze a play Aaron Rodgers could have hit against the Lions and break down a coverage error that resulted in a critical first-half touchdown. Milwaukee Journal Sentinel 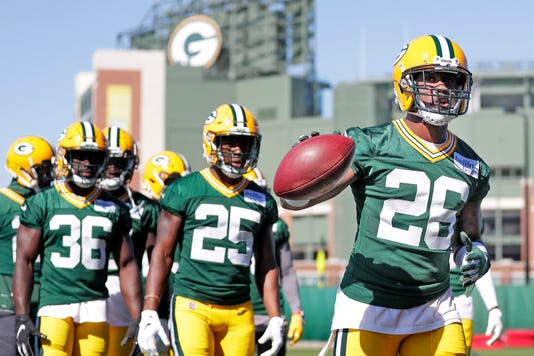 We'll start with Jim Owczarski's story on what players who sign with the Packers during the season must endure, both on the job and at home:

Bashaud Breeland’s eyes widened as reporters packed into a half moon around his locker, which still had “Green Bay Packers” across the placard above him. Signed on an off day, the new Packers corner was closed in upon, television camera “sun guns” projecting a soft, yellowish glow on his forehead.

Like Morrison, Darius Jackson, Korey Toomer and Deante Burton before him, Breeland was asked about how he physically arrived in Green Bay. The answer is standard: You get a call and a flight time, so you pack and go.

“It’s just new,” Breeland said. “So I gotta adjust to it and get used to it. You can’t get no more stressed than what I’ve been through all offseason.”

“When you’re a kid, you’re like, 'oh man, I’m going trade him to this team and he looks sweet in those colors.' That’s really what people really think in real life,” Jackson said. “They’re like oh man yeah, go play. They don’t understand your whole life changes. At least temporarily.”

Be sure to read Jim's entire piece here:

Within hours of signing a contract with the Green Bay Packers in-season, the clock starts ticking. https://t.co/OjSbtK4gYd

Owczarski with some deep background on running back Tra Carson, who was signed to the Packers' practice squad along with receiver Keon Hatcher (the team released running back Joel Bouagnon):

I’ve covered him for a few years now. The Bengals coaches/front office liked him, but he always got hurt at the wrong time for a guy trying to crack a 53. He’s got some talent.

.@JoshJones11_ on last night's #Clubhouse Live: "I just want to be out there more." https://t.co/l2MNyqKzTV#Packerspic.twitter.com/jV2ttfCLBT

New from JSOnline and PackersNews: 5 Questions with LeRoy Butler, 10.9.18 https://t.co/uhuBkz2kUp#Packers

The Ringer puts Mike McCarthy under the microscope:

At this point the concern is whether Mike McCarthy and Aaron Rodgers can “coexist” in Green Bay, but it’s not entirely clear why they have to.@robertmays: https://t.co/K6TKwev9JS

Jason Wilde of the Wisconsin State Journal writes about McCarthy having a sports psychologist address the team Monday:

In @WiStateJournal and on @madisondotcom ~ Mike McCarthy had the #Packers' sports psychologist talk to the team Monday. But the coach saw the obvious, too: “(Not) taking care of the football and the penalties were a huge part of our (struggles)."https://t.co/xJ65rGOZA2

Running the table? James Jones likes Packers to upset both Rams and Patriots as part of four-game winning streak:

.@Packers to upset the @RamsNFL and @Patriots on the road?@89JonesNTAF has Green Bay going UNDEFEATED over the next four weeks👀#NFLPowerRankings | #GoPackGopic.twitter.com/8TVHPGOfX5

The Power Sweep lists the five Packers who have yet to miss a snap:

The #Packers 100% Club now stands at five members after Kentrell Brice missed one snap on Sunday.

It's time to change how we talk about the Browns. It's no longer a novelty when they win: https://t.co/vtBnLo3vBYpic.twitter.com/GaOlt6XU7S

There was a Taysom Hill sighting Monday night in New Orleans:

Taysom Hill takes it around the edge for the touchdown. The Saints are making it look easy.