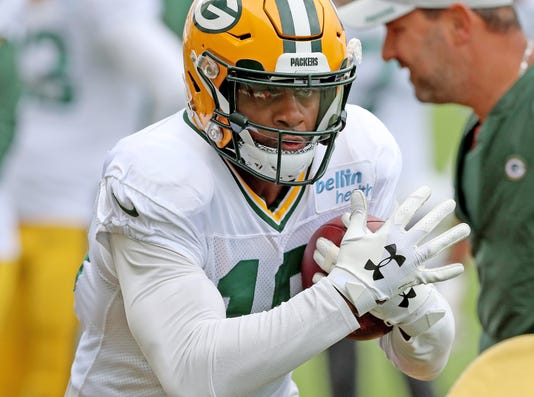 GREEN BAY – Randall Cobb said his hamstring was progressing through rehabilitation during the week but allowed that Sunday’s practice would be the key indicator for whether he could play Monday night against the San Francisco 49ers. The decision was ultimately made that the eighth-year receiver should miss his third straight game, however, and he was ruled inactive before the game.

Fellow wide receiver Geronimo Allison was also ruled inactive prior to the game, and also due to a hamstring injury. This is the second straight game Allison has missed, though he left the Buffalo game on Sept. 30 early with a concussion. The hamstring issue popped up on the injury report last week in advance of the Packers’ trip to Detroit.

It will be the second straight week that the Packers lean on rookie receivers Marquez Valdes-Scantling, Equanimeous St. Brown and J’Mon Moore. The trio all played in Detroit.

Backup tackle Jason Spriggs injured his ankle in practice this week and was also declared inactive. His injury leaves the Packers a bit thin at tackle should starters Bryan Bulaga or David Bakhtiari suffer an injury.

Also inactive for the Packers on Monday night are: