Packers notes: Improved health and troubling numbers coming out of the bye. 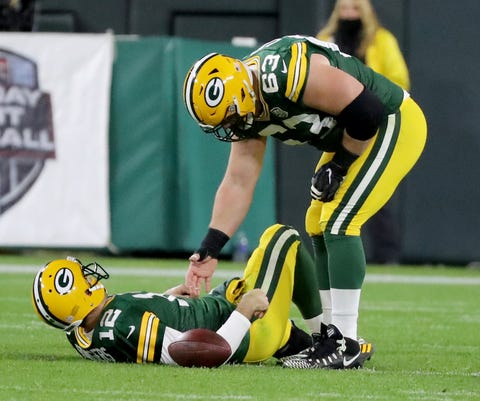 GREEN BAY - As the Green Bay Packers return from their bye week, coach Mike McCarthy expects a healthier roster after a week of rest, including quarterback Aaron Rodgers.

It’s uncertain who will join Rodgers on the practice field Tuesday, which is one day earlier than usual with the Packers pushing up their game-week schedule to account for their upcoming West Coast trip. The Packers listed eight players as “questionable” for their last game against the San Francisco 49ers.

“Feel like we’re definitely going to be healthier,” McCarthy said.

McCarthy said no determination has been made yet on whether receiver Trevor Davis or Jake Kumerow will be designated to return off injured reserve this week.

The offense and defense have each lamented slow starts and it can’t be more glaring than a minus-37 scoring differential (100-63) in the first half of games. In the second half? The Packers are plus-41 (85-44). In total, the Packers have just a plus-4 point differential (148 to 144).

Of the six teams in the NFC with a winning record, the Packers rate sixth in point differential. The Los Angeles Rams (7-0) – the Packers’ opponent this weekend – are No. 1, at plus-107.

“We’re a couple plays away from being 4-2 or 5-1, and definitely a couple plays from being the other way,” Rodgers said after the Packers’ win over San Francisco on Oct. 22. “So we’re thankful to be 3-2-1 right now and realize what’s in front of us, and how this type of play might not get it done against the next opponents. We’ve got to play better.”

According to oddsmakers, the Packers are big underdogs for Sunday's game in Los Angeles. The Packers opened the week anywhere from 8.5- to 9-point underdogs to the Rams. According to ESPN, it would be the biggest underdog the Packers have been with Rodgers as their starting quarterback (going back to 2008) and the largest margin in the regular season.

"I mean being an underdog is good, so I have no problem," Packers corner Josh Jackson. "They really don’t expect out much of us, but we’ll come out with a win, then the roles will reverse."

There is once again a fullback at Lambeau Field, as the Packers signed free agent Danny Vitale to their practice squad. Vitale was a sixth-round pick of the Tampa Bay Buccaneers out of Northwestern in 2016, but he spent the last two seasons in Cleveland. He was released by the Browns on Oct. 12. A true fullback at 6-feet, 1-inch and 245 pounds, Vitale has never had an NFL carry. He does have seven career catches for 46 yards.

DOUGHERTY: 5 things we've learned about the Packers at the bye week