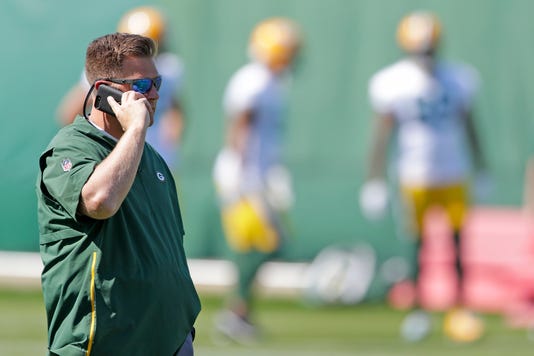 The Packers return to work Monday from their bye week to prepare for the Los Angeles Rams, who improved to an NFL-best 7-0 Sunday with a 39-10 victory over the San Francisco 49ers.

We'll start with Pete Dougherty's five observations about the Packers at the bye. Among them is Green Bay's obvious need for pass rushers and whether there might be one available for general manager Brian Gutekunst to acquire in a trade.

Another scout this week wondered if the Packers still might pull off a deal for a pass rusher between now and the Oct. 30 trade deadline. General manager Brian Gutekunst and his staff should be wearing out their cellphone batteries trying.

Gutekunst can’t let desperation make him stupid. That’s when you get swindled. But in the next week or two, a team that’s out of contention might be willing to part with a decent, older rusher for a reasonable price. Just for fun I looked up a couple contracts to see if a deal might be feasible.

Arizona’s Chandler Jones has 6½ sacks in seven games and at age 28 could have another good season left in him. He’s due $7.4 million in remaining salary this year and $16.5 million ($11.5 million guaranteed) next year. No clue whether the Cardinals (1-6) are willing to move him. But if so, he might be worth a second- or third-round pick.

Buffalo’s Jerry Hughes is older (30) and not as good as Jones, but he has 4½ sacks in six games and had a career-best 10 sacks as a 25-year old in 2013 with Buffalo for Mike Pettine, the Packers’ defensive coordinator. Hughes is due $3.7 million for the rest of this season and $6.35 million next year. There are no reports about whether the Bills (2-4) might be willing to trade him, either. He might be worth a mid- to later-round pick.

Is Green Bay a playoff team? Why isn't Aaron Jones getting more carries? @PeteDougherty tries to figure out the 3-2-1 #Packers. https://t.co/Ae3S0HDtyn

Jim Owczarski writes in-depth on how Aaron Rodgers develops trust in his receivers. Jim had an extensive, one-on-one interview with Rodgers and explores the subject in detail:

There’s no way to get his trust unless it’s hard-earned. https://t.co/XPi6jOB27l

With Randall Cobb and Geronimo Allison expected to return from their injuries after the bye, Ryan Wood writes about what we can expect from the rookie wide receivers who have stepped up in their absence:

Cornerback Kevin King, whose first career interception was the turning point in the Packers' victory over the 49ers, will join safety Josh Jones on Monday's edition of "Clubhouse Live":

#Clubhouse Live with @JoshJones11_ returns Monday. And his guest will be #Packers cornerback @King_kevvoo! Show kicks off at 6:30 p.m. at The Clubhouse in downtown Appleton! pic.twitter.com/b068mJBHIc

Davante Adams: He's the Packers' hot hand when he 'rolls out of bed' https://t.co/u2GgIol7Ui

Acme Packing Co. looks at the big numbers Rodgers is piling up:

Aaron Rodgers is on pace for more than 5,000 yards and some other personal records https://t.co/cSK6vDXS0J

The honors keep rolling in for Rodgers:

Congratulations to @AaronRodgers12 + @TG3II on being named Week 6's @FedEx#AirAndGround Players of the Week! pic.twitter.com/z24Rb6O9X3

The Bears completed a game-ending Hail Mary pass but still came up a yard short in a loss to the Patriots:

Almost one of the greatest plays ever. Sheesh.

The Vikings improved to 4-2-1 and moved into first place in the NFC North by beating the Jets:

The Lions also won and moved into a third-place tie with the Bears at 3-3:

And finally, Packers fans can be thankful they won't have to look at the Rams' mustard-style alternate uniforms that were worn Sunday against the 49ers: